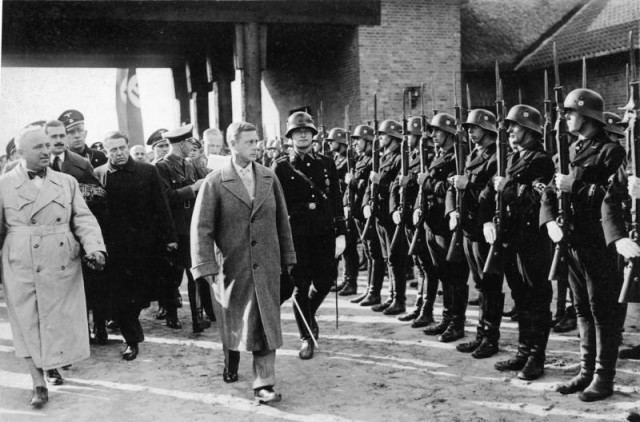 A parcel of sixty photographs, compiled by the equerry to the Duke of Windsor, Sir Dudley Forwood, of an unofficial visit of the Duke of Windsor and Wallis Simpson to Nazi Germany in 1937, has recently been auctioned at Duke’s Auctions in Dorchester, Dorset for £6,830.

This time, immediately before the war, was fraught with tension so a visit by a couple so close to the throne of England was unusual to say the least. The Duke had abdicated his crown in 1936 to marry an American divorcee, Wallis Simpson, but as there was no precedent for what role an abdicated king could fulfill, the Duke found himself frustrated and living in exile in France. Royal historian Carolyn Harris described how the Duke was irritated that his wife was treated with disdain by the Royal Family in England and was largely shunned by the British aristocracy.

The Duke was formally invited to visit Germany, and he was very keen for the visit to go ahead, notwithstanding the fact that the British government were not in favour of the trip at all. They preferred the Duke and his wife to maintain a low profile, but the Duke wanted to try and foster peace between Germany and Britain. He was not alone in that wish and some senior members of the British parliament were also keen to pursue any diplomatic measures available to try and ensure peace was maintained. The British government was almost bankrupt after World War I and the Great Depression, so peace made infinite sense to many in the Government.

Peace, and his anticipated role as a negotiator between their two countries, was not the only reason that the Duke was very keen for the visit to go ahead. He also wanted Wallis to experience a State Visit. Naturally, he had family in Germany and he and Wallis were very well received by the German aristocracy. Wallis was treated like a princess and with the distinction that he believed she was due.

In 1939 when war was imminent, the Duke tried again to broker peace. Historians have interpreted the visit as meaning that the Duke had Nazi sympathies, but that was not the case. His visit to Germany was not in support of the Nazi Party and the Duke realised that he had made a diplomatic blunder by undertaking such a high profile visit. Andrew Morton, the royal biographer said, “The duke was not a Nazi, but he was certainly sympathetic… even after the war he thought Hitler was a good fellow and that he’d done a good job in Germany, and he was also anti-Semitic, before, during and after the war.”

Timothy Medhurst, of Duke’s Auctions said in an interview that the images showed the couple, “in a relaxed environment being shown around by Nazis who are clearly proud of their nation. It is a unique piece of history compiled at a time when the Nazi war machine was preparing for European conquest and the systematic slaughter of millions of people.”