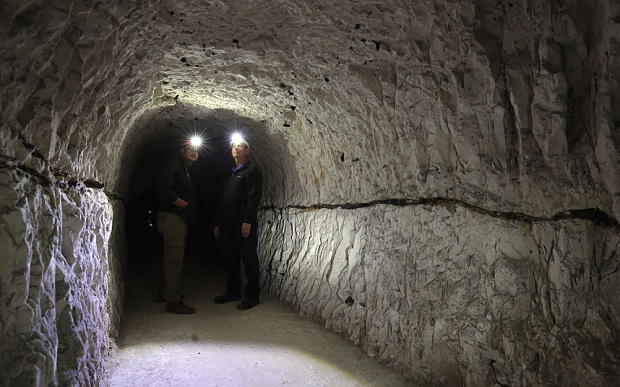 World War Two tunnels that were built by soldiers during the war have been reopened to the public for the first time. The tunnels are located at Dover on England’s southern coast line and right on the White Cliffs that look out onto the English Channel.

The tunnels are a network of bunkers that were built in just over three months and are now providing the public with a unique insight into conditions for soldiers during the war.

It was British Prime Minister Winston Churchill who gave the orders to have the tunnels built. Known as the Fan Bay Deep Shelter, the tunnels were dug underneath the coastal gun artilleries that were used in the UK’s defence against the Germans.

The peninsula where the guns were based is only around 21 miles across the English Channel to the Nazi-occupied French coastline.

The guns were also used to attack German naval vessels and merchant ships attempting to get through the Channel between the two countries.

The tunnel network was dug approximately 75 feet underneath the ground and spans for around 3500 square feet. When they were built the soldiers had to reinforce the tunnels with iron and metal in order to prevent them from caving in. As well as being a way for the military to continue operating during raids, the tunnels could accommodate around 190 men. Winston Churchill visited the tunnel complex in 1941.

Once the war had ended the tunnels and gun sites were closed up in the 1950s. The tunnel entrance was filled in with earth and left abandoned until now.

The National Trust, a British organisation that owns and preserves historical sites of interest, purchased the land where the tunnels are located and decided to excavate the entrance and investigate what remained of them. Once inside they realized they had accessed a time capsule that hadn’t changed since the 1940s when soldiers spent the majority of their service monitoring the British coastline and living in the tunnels.

The tunnel walls are covered in writing and carvings made by the soldiers who lived there, along with munitions, documents and war time artifacts, The Telegraph reports.

The National Trust has had to remove more than 100 tonnes of earth in order to re-open the tunnels, most of which was removed by volunteers. It was originally built by the Royal Engineers and included a medical centre, storage units, and was built to be bomb-proof.