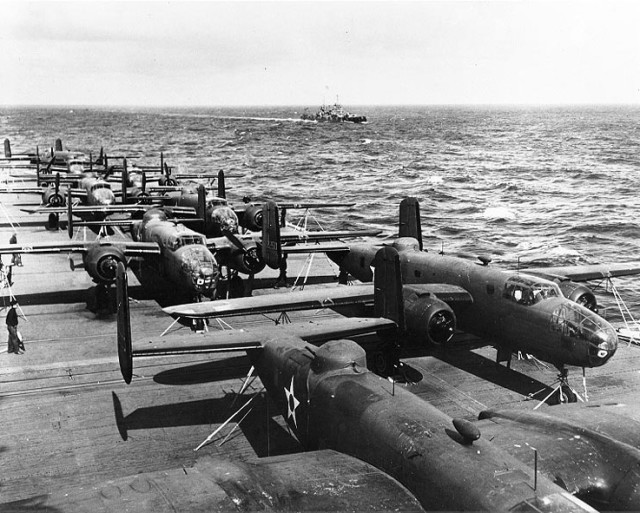 Just before eight o’clock on the morning of December 7th, 1941, Japanese fighter aircraft launched an unprovoked attacked on the US naval base at Pearl Harbour on the island of Oahu in the Pacific. Two hours later many US aircraft and ships had been destroyed and over two thousand Americans were killed. Another one thousand were wounded. The following day, President Roosevelt asked Congress to declare war on Japan.

The attack on Pearl harbour shocked and outraged the American nation, and President Roosevelt asked senior military advisers to draw up plans for an immediate response. It was not an easy task, there were no US air bases near enough to the Japanese mainland to enable a bomber strike to be made, and the Navy did not have aircraft with the necessary range to carry out  a carrier-borne assault safely. The risk to the few American vessels in the Pacific Ocean would have been unacceptable. The American navy and air force needed to come up with something new if they were to hit back at the Japanese.

After careful discussions between army and navy experts a plan emerged. In essence, the plan was to launch sixteen twin-engine B-25 aircraft from the aircraft carrier USS Hornet, which would be positioned 500 miles off the Japanese coast.  The aircraft would not be able to land back on the Hornet after the raid, but would have to  head for airfields in China. The targets selected were key military sites on Honshu island, and the raid would take place on April 18, 1942.

Despite not having launched from an aircraft carrier before, all sixteen pilots took off without incident, and the bombing raid took place as planned. After dropping their bombs, fifteen of the B-25s turned and headed for China. One aircraft was low on fuel and made for Russia which was nearer. Night was falling, the weather had turned bad, and the crews realised that they would not make their intended landing strips. They decided to crash-land on the Chinese coast, and all fifteen aircraft were destroyed. Three men were killed in the crash-landings, and another eight were captured by the Japanese. The rest of the Americans made it to safety, aided by Chinese villagers.

Japan was angered by the raid. The Americans who were captured by the Japanese were later put on trial and two were executed firing squad.  The remaining six captured in China were imprisoned and placed on a starvation diet. The treatment of the American’s cause outrage in America and was contrary to the Geneva Convention.

The Doolittle raid caused little physical damage to the Japanese targets, but as a morale booster for the American people its value was considerable.

The Art Association of Palm-Aire Golf and Country club in Sarasota, Florida is currently hosting an exhibition in honour of veterans. The exhibits include many artefacts from the Doolittle raid, including parts of the aircraft recovered by search teams in 1990-1994. Among the items on display are original letters from Jimmy Doolittle who died aged 96 in September 1993.