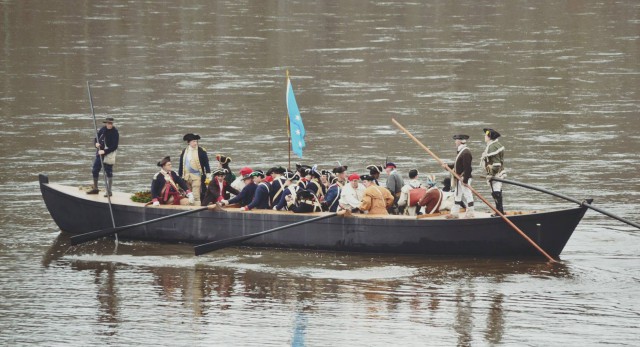 Every year on Christmas Day, a group of re-enactors make their voyage across the Delaware River to commemorate George Washington’s crossing from Pennsylvania to New Jersey in 1776.  This Christmas, the re-enactors had a decent, 65-degree day for traveling, in contrast to the conditions during the original crossing.  At that time, the river was full of ice and the crossing was carried out in the middle of a snowstorm.

The re-enactment this year celebrated the 63rd anniversary of the actual crossing and was witnessed by dozens of families and history buffs.  Although the re-enactment only had a handful of men participating, George Washington crossed the river with 2,400 soldiers, 200 horses, and 18 cannons. During the crossing, 30 Hessians were killed, and two Continental soldiers froze to death.

The attack was planned after a rash of defeats for Washington’s army, resulting in the loss of New York City and other regions.  George Washington wanted to surprise the Hessians who were celebrating Christmas at their winter quarters in Trenton, New Jersey – hoping for a victory and a boost in morale.

It was 11 pm that Christmas night when Washington and his army made the trek across the river.  The men were stationed at three different locations on the river; all groups made it across to the New Jersey side of the Delaware just before dawn the following morning.  About 3,000 other troops were late and did not make the crossing.

At around eight in the morning, Washington’s forces separated into two columns, one of which surprised the Hessians, who were slow to respond because they were recovering from the festivities of the previous night. They were also off-guard because it was generally accepted that Washington’s army, because of its recent defeats, was not a force to fear.

Washington’s men ended up taking over the German defenses quickly.  By 9:30 am the entire town of Trenton was surrounded by Washington’s men.  Several hundred Hessians escaped, but were soon captured.  Washington withdrew after the successful intrusion and capture – because of the missing men and artillery, he did not have enough forces to keep holding the town.

Although this does not seem like much of a victory, it was still a major turning point for the war and for the Patriots.  News of Washington’s capture of the town soon traveled afar and brought hope to the American colonists, who were beginning to fear the Continental Army was incapable of a victory in battle.

Some thought that Washington’s ambush seemed unplanned, but that is not the case.  He took special measures to ensure that his plan would work.  The skirmish was complicated by the missing troops and artillery, but also by the need to use bigger ferries to accommodate all the artillery that the did have.

The bigger ferries took longer to travel forward; at one point, one group of men were nearly three hours behind schedule, which made Washington think twice about whether or not to carry even out the whole battle.  But the 1776 crossing marked the turn of the Revolutionary War in the Patriot’s favor and foreshadowed the Continental Army’s eventual winning of the American Revolution.