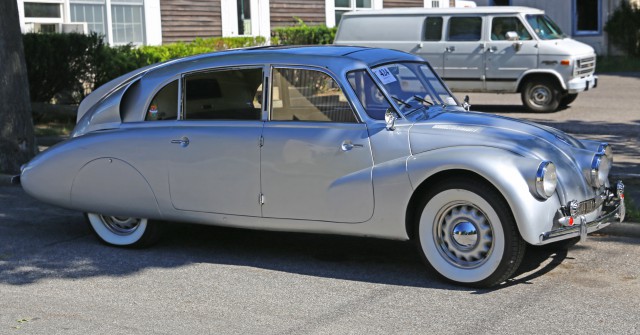 Historians have revealed that more Nazi officers were killed in the Czech car, the Tatra 87, than in actual combat.

The Tatra 77a and 87 were Czechoslovakian-made cars which unintentionally became a killing machine that wiped out hundreds of Nazi officers. The car became known as the Allies secret weapon since it was helping them kill off Nazi troops.

The Tatra had a high speed of 100 miles per hour, which was fast for the era. However the engine was located in the rear of the car and it was very heavy to drive.

Historians say that the models were sleek and stylish, so all the high-ranking Nazis wanted one or drove around in them. Many believed it was the car of the future.

The Tatra was created by Hans Ledwinka and Paul Jaray and had been first produced in 1935. The 77 model had 75 horsepower and a 3.4 ltr V8 engine located in the rear of the vehicle. The 87 model had 95 horsepower and was loved by Nazi generals for travelling Germany’s extensive autobahns.

When Germany invaded Czechoslovakia in the 1930s, the car became increasingly popular among the Germans. It was fitted with a fin that was intended to make it more aerodynamic and had wheel arches that stopped wind drag.

Therefore Nazi officers loved to drive the car fast and go on long runs across Germany. But its heavy steering ensured that if a sharp turn was taken at speed, the car would easily spin out of control and ended the lives of many officers, The Telegraph reports.

Steve Cole, on May 27th at the Hay Festival, said that the Nazi’s love of being flash, egotism and machismo drove them to their own deaths in the Tatra.

“These high-ranking Nazi officers drove this car fast, but unfortunately the handling was rubbish, so at a sharp turn they would lose control, spin out and wrap themselves around a tree killing the driver more often than not,” said Cole.

It is said that within the first week after the Nazi’s commandeered and began driving these cars, seven high-ranking officers died in wrecks. Because of this, the car was dubbed by the Allied forces as the “Czech Secret Weapon.”

In 1934, Hitler ordered Porsche to come up with a car design that could be mass-produced and was economic for the German people to drive. They came up with the infamous VW Beetle four years later. There were many similarities to the Tatra, and Porsche was in fact forced to pay the Czech-Tatra manufacturers three million Deutsche Marks in compensation for the design elements that they took from the Tatra in the early 1960s.