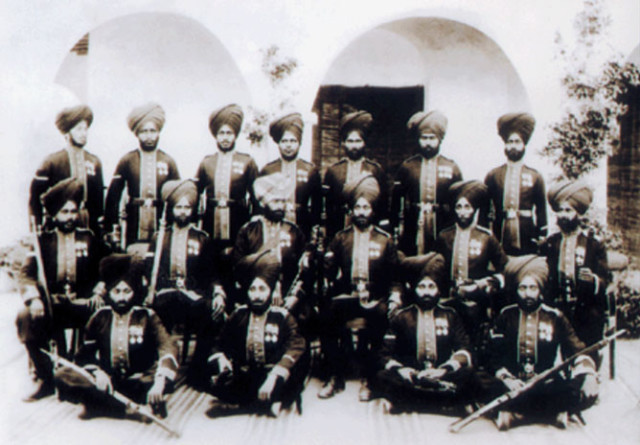 On the 12th September every year the 4th Battalion of the Sikh Regiment of the Indian Army, celebrate their regimental Day by remembering 21 fallen comrades from the 36th Sikhs, who fought with bravery, dedication and honour at the Battle of Saragarhi.

Saragarhi is a small village in the Ramana Mountains of present day Pakistan. In 1894, this area, of what was then India, was an extremely volatile and unsettled place and the British had a tenuous hold on the existing peace. The Pashtuns Tribes occasionally attacked British forces and because of this they renovated and consolidated a series of  old forts, originally constructed under the rule of Maharaja Ranjit Singh, Ruler of the Sikh Empire. Two forts had been re-constructed on the Hindu Kush Mountain range and these were Fort Lockhart on the Samana Range and Fort Gulistan on the Sulaiman Range. These two forts were a few miles, apart but not visible to each other so a new blockhouse was built at the village of Saragarhi to act as a heliographic communication post. This little outpost consisted of a small block house topped with loop-holed ramparts and a communications tower used for signalling.

In 1897 the Afghans rose up in rebellion and in the period 2th August 1897 to 11st September 1897 the Pashtuns made a concerted effort to reclaim the British-held forts. The 36th Sikh repulsed the attacks but the rebellion was gathering steam and from the 3rd to the 9th September 1897 the Pashtuns, in an alliance with the Afridi Tribes, launched a concerted attack on Fort Gulistan. The attack was repulsed and the relief column from Fort Lockhart, left members of the 36th Sikh at Saragarhi, as reinforcement for the signalling detachment stationed there, on their way back to Lockhart. This increased the complement at Saragarhi to one NCO, Havildar Ishar Singh, and 20 troops with one cook.

On the 12th September 1897, the frustrations of the tribes boiled over and they changed their tactics, deciding to destroy the communications blockhouse at Saragarhi, instead of losing so many men attacking the forts. At nine in the morning approximately 10,000 tribesmen gathered in preparation for attacking the communications blockhouse at Saragarhi, which was manned by 21 soldiers and a cook. Fort Gulistan received a signal regarding the imminent attack but to the dismay of the defenders the reply indicated that Gulistan could not come to their assistance immediately.

The brave defenders under the guidance of Ishar Singh, made the decision to defend the blockhouse to the last man.   This was not so foolish, for by tying up the Pashtun attack at Saragarhi, it meant that the other forts had time to better prepare as they would be next on the list for the Afghan tribes.  As the Afghans attacked, the Sikhs fought back bravely and a fierce battle was joined. The Sikhs fought using delaying tactics and the casualties on the part of the tribesmen mounted steadily. The Sikhs stubbornly held on and they refused all the offers for surrender made by the tribesmen.   The death toll on the side of the tribesmen continued to rise and every attempt to rush the gates of the blockhouse was repulsed. Late in the afternoon, the tribesmen, using a blind spot, managed to affect an undetected breech in the wall. Singh ordered his Sikhs to fall back into the inner sanctum of the blockhouse whilst he held off the attackers at the breech for as long as he could. When he fell the tribesmen managed to penetrate the blockhouse and by this time all but one of the defenders was dead.

The only one still alive was Sepoy Gurmukh Singh, who was the communications detail and had been sending updates on the battle to Fort Gulistan. He then told his commander at Fort Gulistan that he was going to pack his equipment away and fix his bayonet before engaging the enemy. As the tribesmen set fire to Saragarhi the Sikh battle cry of, “Jo Bole So Nihal, Sat Sri Akal (Victory belongs to those who recite the name of God with a true heart)” was heard from Sepoy Singh.

During the six hour battle, patrols from both Gulistan and Lockhart rode out, and returned with reports that the Pashtun forces numbered close to 14,000. The sacrifice of Ishar Singh and his small band of astoundingly brave men bought Gulistan and Lockhart enough time to prepare their defences; thus saving the lives of the men in their regiment.

When the relief troops arrived at Saragarhi they found, not only the 21 dead Sikh troops with their cook also killed, but over 600 dead tribesmen.

Their extraordinary bravery and commitment to duty was rewarded when all 21 of the men were awarded the Indian Order of Merit, the highest award for gallantry given to Indian troops at the time. This is the only time in history that an entire body of men has been awarded medals for gallantry of such a high level for the same battle.

Historians classify this battle as one of the greatest last-stands ever fought. It is remarkable that such a small force managed to hold off such overwhelming numbers for such a long time. When the details of this battle were recounted in the British Parliament, the entire house rose to their feet and gave a standing ovation for this collective act of courage and indomitable spirit.   These brave men’s spirit is what is revered within the 20 battalions of the modern day Sikh regiment and why they still commemorate the  Battle of Saragarhi, every year.