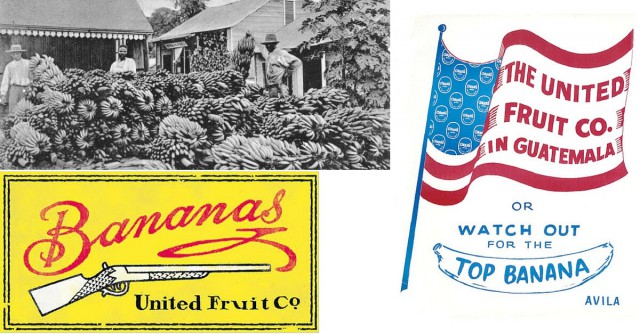 The United Fruit Company (UFC) was once so powerful that the US government destroyed democracy in a country for it.

It started in 1931 when Jorge Ubico became Guatemala’s president. By then, UFC had a monopoly on the country’s coffee and banana trade. It also owned Guatemala’s docks, railroads, and communications, so Ubico exempted them from taxes, gave them 200,000 hectares of land, and let them execute bothersome workers.

He was ousted in the October Revolution of 1944, which installed Prof. Juan José Arévalo Bermejo as Guatemala’s first democratically-elected president. Arévalo established minimum wage, built hospitals and schools, set up health and safety standards, and began cracking down on the labor practices of big companies.

To the US government, that made him a communist.

During the next presidential elections in 1951, Bermejo was replaced by Jacobo Árbenz Guzmán, one of the leaders of the October Revolution. Árbenz continued Arévalo’s reforms by destroying UFC’s transportation monopoly with a new port and highways, as well as building a hydroelectric plant to provide cheaper power than what the American monopolies charged.

Then came Decree 900, an agrarian reform which challenged the power of companies like UFC. By June 1954, some 1.4 million acres were returned to the state after compensating most (but not all) of the owners with government bonds. Those lands were redistributed to some 500,000 people, about 1/6th of the population. He also nationalized roads which went through redistributed lands, increasing rural trade.

Since a vast swath of Guatemala was owned by UFC, Árbenz’s policies hurt. So they turned to the US government which had supported the previous dictatorships.

In 1952, President Truman asked his senior officials what to do about UFC’s request. Their answer was Operation PBFortune – to overthrow Árbenz with a coup. But Secretary of State Dean Acheson found out and quashed it.

Then President Eisenhower took over in 1953.

Árbenz couldn’t have picked a worse time to annoy UFC.

The new plan to topple Árbenz was called Operation PBSuccess. Long before it was carried out, however, the UFC had already been hard at work. It spent half a million dollars ($4,430,415 in today’s money) lobbying Congress and creating a disinformation campaign about Árbenz’s policies.

In 1952, they paid John Clements, editor of The American Mercury, $35,000 ($310,129 today) to create a 235-page report on why Árbenz had to be overthrown. Though fraudulent, it convinced Congress to back Operation PBSuccess with a budget of $2.7 million – though it ended up costing far more.

On 29 March 1953, however, a small rebellion nearly destroyed the operation when the Guatemalan government arrested those responsible. Among those caught were some CIA operatives, thus delaying the coup.

Later that October, John Puerifoy was made the new ambassador to Guatemala in order to develop close ties to its military. Mercenaries and Guatemalan exiles were also recruited, including Carlos Castillo Armas, a Guatemalan who was supposed to lead the original Operation PBFortune. His new group was called the Army of Liberation.

The neighboring countries of Honduras and Nicaragua became the staging post. On May 1, the “Voice of Liberation” radio program began broadcasting into Guatemala, urging its people to resist their communist dictator and to support their liberator, Armas.

Árbenz knew of the invasion and tried to buy arms, but Canada, Germany, and Rhodesia were banned from selling him any. So he bought them from Czechoslovakia instead, but it was exactly what America wanted.

They accused Guatemala of importing weapons from the Soviets, and the Soviets of interfering in America’s backyard. So on May 23, they imposed a naval blockade called Operation Hardrock Baker. On May 26, US planes flew over the capital, dropping leaflets urging the people to rise up against Árbenz.

On June 15, Armas’s men left Honduras and El Salvador to attack the Guatemalan border towns of Puerto Barrios, Esquipulas, Jultiapa, and Zacapa. One group was intercepted by El Salvador police before they crossed, but the rest made it through to destroy railroads and telegraph lines.

Armas entered with a larger force on June 18. His planes flew over a government rally in Guatemala City, demanding Árbenz’s resignation. The attack on Zacapa and Puerto Barrios failed, but an aerial assault on the capital succeeded.

Though there was little damage, it convinced the Guatemalans that a larger force was on its way. Not wanting to disappoint, a Lockheed P-38M Lightning bombed a British cargo ship docked in Puerto Barrios, which ended up costing the CIA $1M in compensation.

Guatemala took its case to the UN Security Council that same day, receiving support from Britain, France, and the Soviet Union. The Council agreed to investigate, but was vetoed by the US on June 24.

Another plane bombed the town of San Pedro de Copán on June 22. Armas’s men finally captured Chiquimila on June 25, and even though it was the only city taken, it swayed the Guatemalan military into supporting Armas, since they believed a larger force would follow. Later that evening, they told Puerifoy to stop the attacks in return for Árbenz’s resignation.

Árbenz did so on June 27, then walked into the Mexican Embassy asking for political asylum. Thus Guatemala returned to being just another banana republic ruled by US-backed dictators.

On 20 October 2011, President Alvaro Colom stood at the National Palace in Guatemala City and publically apologized to Árbenz’s son, Juan Jacobo, for the country’s participation in its own demise. He then called on the US to do the same, but they haven’t.

And UFC? It now calls itself Chiquita Brands International.