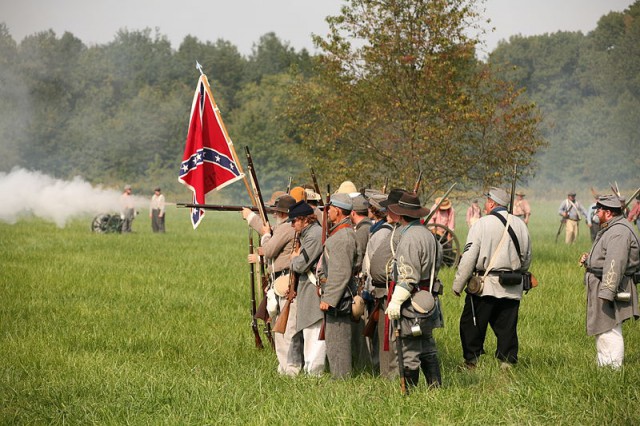 Some say the flag is part of America’s history, regardless of whether or not it is offensive. However others say it shouldn’t be allowed to be flown at state capitol buildings and a man in Virginia has been charged with vandalising a Confederate monument as tensions continue to rise.

Re-enactors of the Civil War say it is a complicated issue. Most suggest that the Confederate flag has a place in the history of America, regardless of what it stands for. Some also suggest that the historical truth needs to be told in its entirety and not picked apart to support various modern day political interests.

Civil War re-enactors are in their thousands and take part in events across the US. They say that there were many flags, and the one used by hate groups in the south is actually not an official Confederate army flag, in fact it is a Confederate navy pennant and was the Tennessee army’s flag.

Many soldiers who fought under the flag were not slave owners and fought for other reasons than just preserving slavery, such as preserving the rights of individual states, The Guardian reports.

Most agree that the flag shouldn’t fly at state capitol buildings.

This weekend a re-enactment event including camping sites, marching and a gun and cannon fire battle took place in Illinois. This week will also see the anniversary of the Battle of Gettysburg which happened 152 years ago. Many re-enactors are going to be gathering in Gettysburg to take part in a huge re-enactment of the battle.

One African American re-enactor said that the flag is part of history whether good or bad, and so will ensure the truth of history will continue to be told as long as it exists.  She said that American history can’t be told without the Confederate flag.