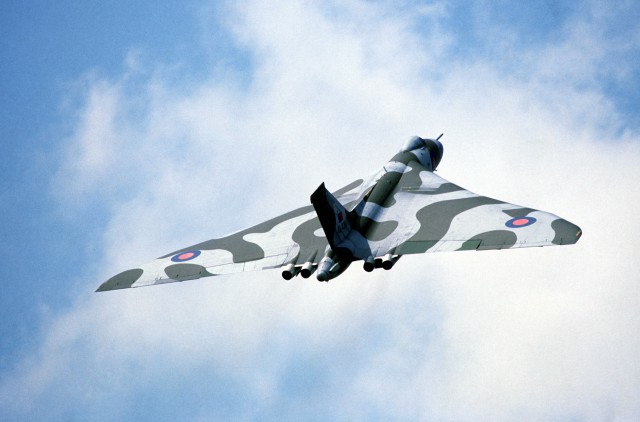 The last airborne Vulcan bomber which was built and used during the Cold War is to be grounded this year.

Built 55 years ago, the Vulcan bomber has been maintained in Leicestershire, England and has flown all over the world.

The bomber will fly one last season this summer at air-shows across the UK and will then be retired in the autumn.

The SkyTrust owns the aircraft and has been housing and maintaining it, but now engineers say the Vulcan XH558 will need to be retired. It costs the SkyTrust millions of pounds every year just to keep the aircraft in flying condition, it is a huge delta wing aircraft and the trust says that with sadness it is no longer going to be able to fly.

The Vulcan XH558 was used by the Royal Air Force from 1960 through to 1985. It was used for sea reconnaissance and for refuelling aircraft while they were still mid-flight. The RAF did continue to maintain the Vulcan for displays for another seven years after it stopped officially using the aircraft. But budget restrictions meant that the RAF was no longer able to support the Vulcan’s excessive maintenance costs.

The Vulcan was stored at Bruntingthorpe airfield in Leicestershire in 1993 and volunteers came together to raise the funds in order to get the aircraft flying again. Around £7million in lottery money was donated so that engineers could get the Vulcan operational and it flew again in 2007.

Its last home has been at the Robin Hood Airport in Doncaster and the decision to retire the aircraft has come as three of the engineering firms who were funding the aircraft have pulled out, the Leicester Mercury reports.

The reasons given were that the aircraft is now becoming more and more difficult to assess in terms of safety, particularly of its engines and frame.

The SkyTrust says it is going to make this summer the Vulcan’s best, booking it in for as many displays as possible. They said that the Vulcan is a symbol of British engineering at its best and should be celebrated by as many people as possible.