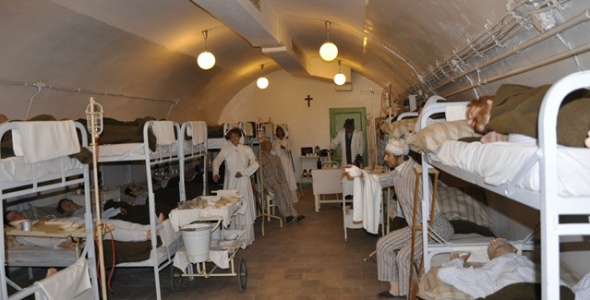 Cold War relics dot European, Russian and American landscapes, but none more so than a German surviving hospital bunker that had been created to use as a medical centre in the advent of nuclear warfare between the East and West.

Medical care for the victims of potential nuclear war was a top priority for the countries involved, and many medical facilities that would be immune to the impact of a nuclear war-head were created.

The hospital bunker in Gunzenhausen in Germany’s Bavarian region is a glimpse of the past that remains exactly equipped as it was all those years ago. Medical equipment, supplies, beds, linens and furniture all sit within the bunker awaiting nuclear war casualties that never came.

The bunker hospital was built since if nuclear war had taken place between the East and West, normal hospitals above ground would have been destroyed in the war. Underground was the only place that people would be able to survive, live and receive medical help.

The bunker in Gunzenhausen has no windows or sunlight and has just plain concrete walls. Hundreds of bunk beds are lined up in rows and could have accommodated more than 400 injured people.

The bunker lies in the western-governed territory of Cold War Europe and so was established by the western-backed authorities within Germany.

Records show that there were more than 200 stand-by hospitals and medical centres around Germany for the potential aftermath of nuclear war. Most of them were based on the design and layout of the bunker in Gunzenhausen, which was a flagship establishment.

It was located three metres under the surface of the ground and was built in 1965, during the height of the Cold War détente. Today its rooms and corridors echo with the sound of silence and cover more than 4000 sqm of land. The bunker is believed to be the only surviving bunker that remains fully equipped with its original furniture and equipment.

Tours are available for visitors of the site. Groups are shown around by tour guides who explain how and what the bunker was used for. They are taken through massive steel doors that were used to protect against nuclear explosions, the dalje.com reports.

Wear and tear has left some parts of the bunker in a damp, cold and water-logged state. Plaster hangs from the walls and large cracks have formed in the bunker’s walls.

Original fluorescent tube lighting still floods the bunker with light and markers painted on the corridors guide people in the right direction.