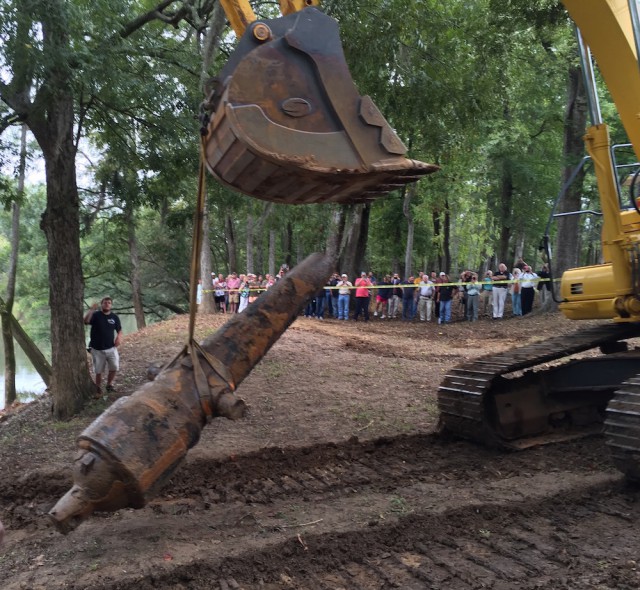 No one could imagine that in the famous Pee-Dee River in Florence lies a war relic that could uplift the morale of the whole community. The people of Florence in South Carolina witnessed the recovery of three civil war canons from the bottom of the River, the sight was inspiring and canons looked absolutely exquisite.

The canons were once a crucial part of a confederate warship CSS Pee-Dee, a very celebrated warship in confederate history. Engineers pulled out the canons from the remains of the warships that lay at the bottom of the river for more than a century and a half. Despite their rusty look and discoloring, one glance on the canons is enough to bring back the history that haunt United States till today.

Lifting the canons from the bottom was not an easy task, and Divers had to put in a lot of effort to successfully bring them to surface. Heavy machinery was called on the scene to lift the historic weaponry weighing a whopping 6,800 kilograms (15,000 lbs.), the Live Science reports.

The discovery was made possible due to the efforts of the South Carolina’s state Archeologist Jonathan Leader. An elaborated campaign was initiated under the supervision of Mr. Leader to locate the legendary CSS Pee-Dee, which was reported to be present somewhere in the Pee-Dee River. Mr. Leader commented on the discovery that despite being under water for such a long time, canons looked in pretty good shape and are ‘ready to rock and roll’.

Finding CSS Peedee was a huge relief for Mr. Leader and his colleagues working in the Archeology and Anthropology Institute at the University of South Carolina. From 2009 to 2012, Leader and his team collaborated with a number of other institutions to locate and devise an effective method to recover the remains of the warship from the Riverbed. In the early phases of the search for the lost warship, the team located the site of the famous Mars Bluff Navy yard, where a number of confederate engineers and local people built CSS Peedee along with a many other small warships and boats to be used in the Civil War.

After the dissolution of the confederacy a gigantic set of weaponry was collected and sent to the Museums and other places across United States, away from their origin. This not only contributed to the loss of history associated to the relics, it shoved many valuable historic items further away from the sight of the community who built them.  The amazing thing about these canons in Florence is that they are found close to where they were used for the last time, firing at the Union Army lead by William T. Sherman. When confederate soldiers realized that they could not hold the Union troops any more, they threw their canons in the river Peedee.

These canons are not just a historic relic for the local community, purely because the ancestors of many local people actually contributed to the building of such Civil War weaponry and also fought against the Union. This discovery not only brought the community together to celebrate their history, it also gave them a better perspective on their past and present.