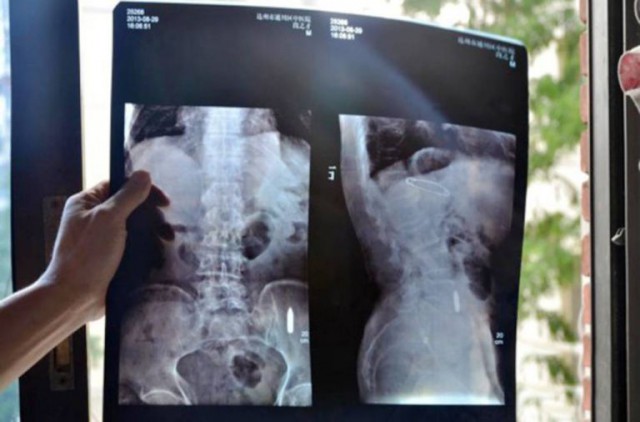 A Chinese war veteran has discovered that still has a bullet lodged in his stomach after 60 years.

Duan Zhicai, who is now 94, fought for his Chinese homeland against the Japanese during World War Two and went on to fight in the Korean War.

Ever since his military service he has lived a normal, healthy life. But then two years ago he began to suffer with stomach pains. When they wouldn’t subside he went to see his doctor who recommended Duan should have some X-Rays so that they could assess what was wrong.

Duan attended his local hospital to have the X-Rays and when they were complete and the doctors looked at the results they could not believe that Duan actually had a bullet stuck in his stomach. Duan was even more shocked when he heard the news. Neither the doctors or Duan expected a bullet to be the cause of his discomfort.

The bullet was just over one inch long and had been lodged in Duan’s abdomen for more than 70 years.

When thinking through his military service, Duan does remember being injured and says that he had fallen on a sharp object during intense fighting on the ground.

The doctors have said that the bullet remained in Duan’s stomach for so long because it was made of metal. In considering the options to remove the bullet, doctors have recommended that it is not removed because of Duan’s age. They believe that the trauma from surgery could be life-threatening for Duan, the Express reports.

Upon assessing the bullet’s location and condition the doctors have said that the bullet isn’t life-threatening to Duan as it is in his stomach. Duan will instead be receiving medication to alleviate the discomfort and pain he is experiencing.

Whilst China didn’t join the Allies in the fight against the Nazis, the Japanese brought China into World War Two by invading the great nation long before the war had even started in 1937. Japanese troops invaded and took Beijing that year and led to Chinese nationalists siding with the Soviet Union in order to gain military equipment and support from the Soviets.

The Japanese occupied China and continued to clash with Chinese Communist and Nationalist forces still operating in the country. By 1941 and after many negotiations and trade embargoes by Western powers, Japan decided to try to prevent a US Naval presence in the Pacific by bombing Pearl Harbour. However it had the exact opposite effect and instead brought the US into World War Two and meant the end of Japanese rule across Asia and China.