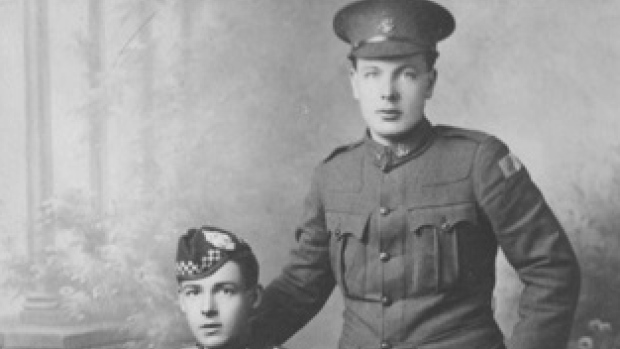 John Joseph Ryan was a Canadian veteran of both World War One and World War Two. He was born in 1896 in Canada and became a telegrapher, but when war broke out he joined the army at the age of 17 and was deployed to the First Newfoundland Regiment.

John fought at Gallipoli in Turkey where he was wounded by shrapnel. He was taken to Malta for treatment and then sent to England for further medical support.

Two years later he was able to return to service and survived being gassed at Ypres in France, but he was later wounded when a sniper shot him. He was again sent back to England.

This time he wasn’t going to be able to return to service so he was sent home to Canada in 1917. Discharged from the army he went back to civilian life as a wireless operator, but this time he did his job aboard the wooden steamer, SS Erik.

In 1918 the ship set sail for Sydney to transport coal back to Canada. However when the ship was sailing through the Gulf of St Lawrence, off the French island of St-Pierre, a German submarine spotted the SS Erik.

John recalled that they knew the German submarines were in the area, so the ship followed a course along the coastline. However the steamer was very slow moving at around six knots.

One night just after midnight, an explosion woke John and everyone else. John slept on the bridge near to the wireless room and so he jumped up and out onto the deck to see what had happened.

He spotted a shell in the water and says that he knew they were being shelled. As more were fired, one hit the coal load on the main deck and threw up a huge cloud of back dust. John ran back to the wireless room, but all of the equipment had been sent flying and he couldn’t send a message.

Further shells hit the boiler room and the boat began to steam and then set alight, but the steam actually began to put the fires out.

The 17 crew men waited to see what would happen, and noticed the German U-boat surface not far away. They sent a lifeboat to them and a German officer boarded the SS Erik to check if an SOS message had been sent, but John hadn’t been able to.

The Germans took the crew aboard the submarine and blew up the steamer.

They were all taken back to St-Pierre along with prisoners from other ships and then finally shipped back to Canada.  John recalled that during World War One the Germans wanted to destroy the ships to stem the Allies’ war effort, but didn’t take it out on the men doing their job, unlike World War Two when Hitler and the Nazis were merciless, the CBC News reports.

After the war, John married and had five sons. He started his own grocery business and worked there his entire life until he died aged 86 back in 1983.