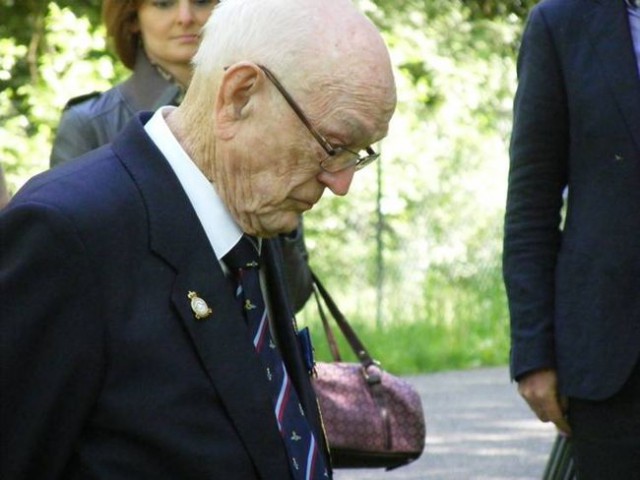 A Canadian World War Two veteran has been taken back to visit the crash site where his RAF Halifax bomber crashed in 1944.

Bill Robertson was a crew member aboard the bomber for the Royal Canadian Air Force. On a mission over enemy-occupied territory Bill’s Halifax bomber came under anti-aircraft fire and was shot down. The bomber burst into flames and the plot instructed the crew to bail out.

The crew landed in Belgian countryside and Bill hid out until he made contact with Belgian’s resistance movement. They helped Bill to escape capture by the Nazis and he hid in local family homes of those who were sympathetic to the Allied effort.

Bill spent four months living in hiding the Chief of Police of the city of Liege’s home, and was looked after by the Rademaker family.

Bill says he thought the family were so brave, since if they were to be discovered hiding an Allied servicemen the Nazis would have shot them. Whilst he was in hiding, Bill read books, played board games, studied a French dictionary, and was able to socialise with the family. Only at night was he allowed to venture just outside the back door for some fresh air.

Bill survived the war and at first stayed in touch with his surrogate Belgian family, but over the years lost contact with them. Bill went home, got married, had a family and in old age had to care for his sick wife until she died two years ago.

Now after 71 years since he crashed in Belgium, he has made a commemoration trip back to the country that hosted him in 1944. Bill first flew to London with his family and stopped off to meet his war time friend John Evans who now lives in a care home in London. They spent a day talking about their shared memories of the war and reminiscing. Then Bill visited the Imperial War Museum to see all the old war-era aircraft including the Messerschmitt which could have shot down Bill’s plane.

After the visit to London, Bill and his family travelled to Belgium to visit the crash site which now has a memorial at the side of the road near to where the plane crashed near Gent. Bill along with friends, family and family of Belgian’s resistance fighters stood together in a memorial ceremony for the plane crash and to commemorate those who died. Bill and John are the only two surviving crew members who are still alive today, the Intelligencer.ca reports.

The next day Bill returned to Liege to meet with the family he once hid with. The, during the war,  young teenage daughter, Yvette, is still alive today and still lives in the same family house. The old friends talked for hours and Bill gave her a locket in thanks for her help during the war.

Bill was then able to tour the city, which he hadn’t been able to do in 1944.  He also visited key battle sites including Dieppe, Juno Beach and Vimy Ridge.