The Brittany American Cemetery is the final resting place of  4,409 American World War II soldiers who lost their lives in Normandy, France, during Operation Cobra. The cemetery is located just outside the town of St. James.

The 4,409 American military dead buried in the Brittany American Cemetery lost their lives in the area of northwestern France extending from the beachhead westward to Brest and eastward to the Seine and represent 43 percent of the burials originally made in the region.

They were interred there by the American Graves Registration Service in the distinctive grave patterns proposed by the cemetery’s architect and approved by this Commission.

There are two maps inside the memorial building. The breakout of the beachhead and the advance to the Seine River are shown on one of the maps. The other illustrates the operations in Normandy right through to the end of the war. 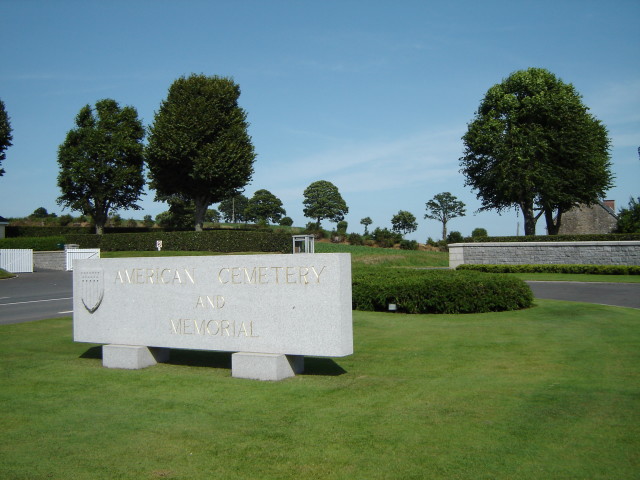 Around 40% of the American soldiers that fell in the battles in and around Normandy never returned to the U.S. and remain in France.

In keeping with the style of other American military cemeteries, the site is filled with rows of white Latin crosses. On each individual cross is marked the name, rank, unit, place of birth and day of death of the fallen soldier. On the crosses that symbolize the 97 bodies whose identities were lost are the words: “Here Rests In Honored Glory an American soldier known only to God”.

On 16 plots to the left and right of a central path are 81 Stars of David that represent the Jewish soldiers who lost their lives fighting in Normandy. There are also the Tablets of the Missing, on which the 499 names of those men who were never found are inscribed. Rosettes mark the names of soldiers who have been found. 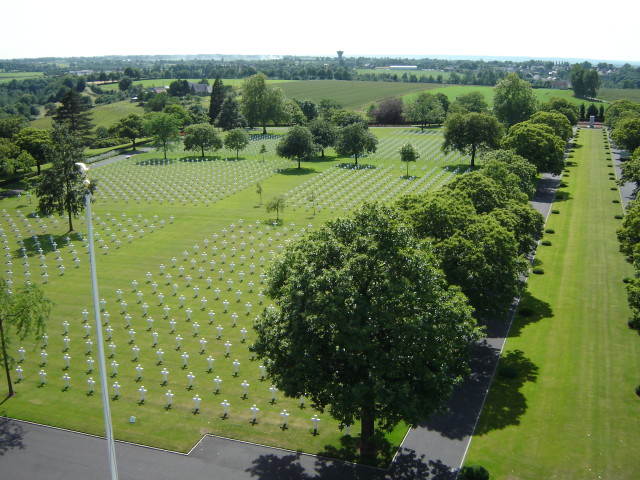 Among those buried in the cemetery are two Medal of Honor recipients, Sherwood H. Hallman and Ernest W. Prussman. American film actor Richard Fiske (born Thomas Potts) is buried there too.

The layout of the cemetery recreates the flaming sword backed by a shield, which is the military emblem of the Supreme Headquarters Allied Expeditionary Forces. The emblem is also displayed above the memorial’s entrance in a stained-glass window. The great seal of the United States is also displayed in stained glass above the chapel altar.

There is a guest book located in the visitor building which visitors to the site are invited to sign and leave a message of remembrance for the men who fell there.

Annual commemoration events are held at the site, such as on Memorial Day and Veterans Day ceremonies, and one ceremony even honoured paratroops with a CV-22 Osprey flyover.