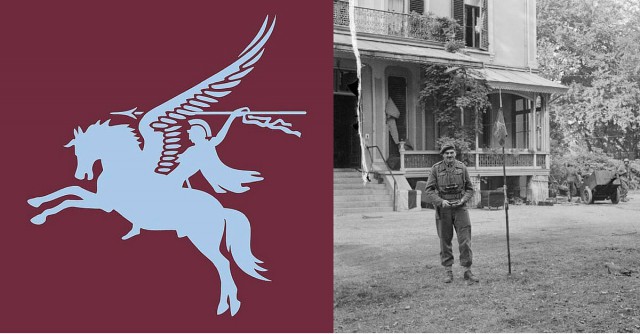 The famous emblem of Pegasus aloft on a blue background has for a long time been the defining symbol of the British Airborne Forces. The badge was approved by Winston Churchill himself. However, the Pegasus was forced into retirement in 1999 amid controversies between politicians and retired officers, and related to the relevancy of Pegasus’s regimental history.

The Pegasus was worn by glider and parachute formations during the war. According to Brigadier Colin Weir, it was a universally beloved badge, and its removal “was the equivalent of taking away the Ferrari’s unique logo.”

The soldiers were so attached to the emblem that even though they were forced to remove it from the outside of their uniforms, many secretly stitched it back on the inside of their clothing.

In a turn of luck for the Pegasus and its ardent supporters, recent shuffles amid the Army that occurred since the Defence budget cuts mean that the para-military brigade will be once again under the control of the Army, which plans to reinstate Pegasus as the official emblem of the Colchester Brigade.

A senior officer, speaking under condition of anonymity from the brigade headquarters, said, “It has taken a long time, but now that we are moving under command of the Commander Field Army, it has provided an opportunity for change. It was all about regimental rivalry and at last we have won the day and next month we will remove the Eagle and wear Pegasus again.”

Starting next month the Pegasus will be back in its rightful place on the left arm of every paratrooper in the division, bearing the exact same design as was worn by units during World War 2.

The Army’s ceremonial dress committee, along with commander Brigadier Colin Weir of the 16 Air Assault Brigade, will present paratroopers with their badges next month at a ceremony in Melville Barracks, The Telegraph reports.

Brigadier Weir said, “Pegasus is the defining symbol of British airborne forces and is internationally recognised as the classical image of an armed man being delivered into battle by air. Pegasus’ reintroduction has caused a real buzz of excitement through both serving and veteran members of the brigade.”