Editors note: These are the Gold Train updates up to March 2016

In December 2015, the press conference denounced the claims of a Nazi Gold Train, by Piotr Koper and Andreas Richter. The famed treasure hunters,  they still claimed it is there, and said that the only way to find  out once and for all if the train was there, was to dig.

The treasure hunter team that has been looking for the train for over 3 years claim they have found the tunnel that will lead them to the treasure train, which was supposed to be hidden at the end of WWII by the Nazi’s.

The hunt was stopped in December after a press conference in which it was announced by experts that there was no evidence of a train. But now, according to the Daily Star, an agreement was made with Poland’s railway company PKP allowing the dig to commence within days.

For weeks,  locals from the town of Walbrzych, the alleged location of the train, have been protesting to allow the search to continue.

According to the Daily Express, there have been several angry protests at the spot with locals waving shovels in the face of police as they demand to be allowed  to dig at the location.

A preliminary scan of a collapsed rail siding in September of 2015 produced radar images described by Deputy Minister of Culture Piotr Zuchowski as providing “99 percent” certainty of the presence of a buried train.

The Polish government has since distanced itself from the remark, news.au.com reports.

In October 2015, the Polish military moved in to check the site for explosives. The search that was undertaken was non-invasive only, meaning that no digging or drilling could take place. With the use of Ground-Penetrating Radar, there was an attempt  to establish the precise location of the gold train.

Wait, I thought there was no train! 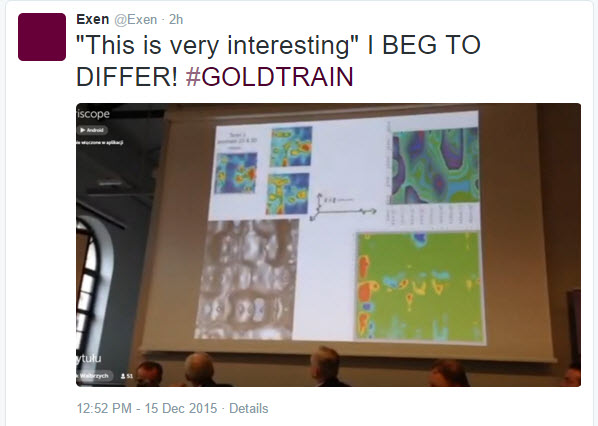 In mid-December during a press conference researchers presented their findings regarding the alleged gold train near the town of Walbrzych in Poland. Professor Janusz Madej from Krakow’s Academy of Mining said, “There may be a tunnel. There is no train especially an armoured one carrying precious metals.”

Scientist Janusz Madej: ‘treasure hunters’ geomagnetic readings may have been disrupted by the presence of overhead power lines.’

After the press conference, the municipal office of Walbrzych announced that further research should be conducted to conclude the investigation. And now the dig is on again!

Video from the press conference:

Why Are These Tunnels There?

Treasure hunters Piotr Koper of Poland and Andreas Richter, a German, announced in August 2015 they had discovered a 320-foot-long train buried eight to nine meters underground in a railway tunnel that was part of Nazi Germany’s Riese project (Riese meaning “giant” in German).

Riese was the  code name for a construction project of Nazi Germany in 1943–45, consisting of seven underground structures located in the Owl Mountains and Książ Castle in Lower Silesia, which was part of Germany, but after the war became part of Poland. Inmates from Gross Rosen concentration camp were used during the construction of the tunnels.

At the peak of its activity in 1944, the Gross-Rosen complex had up to 100 subcamps located in eastern Germany, Czechoslovakia, and on the territory of occupied Poland. The population of all Gross-Rosen camps at that time accounted for 11% of the total number of inmates trapped in the Nazi concentration camp system.

A total of 125,000 inmates of various nationalities passed through the complex during its existence, of whom an estimated 40,000 died on site, on death marches and in evacuation transports. The camp was captured on February 14, 1945, by the Red Army.

The purpose of the project remains uncertain because of lack of documentation. Some sources suggest that all the structures were part of the Führer’s Headquarters; according to others, it was a combination of HQ and arms industry, but comparison to similar facilities can indicate that only the castle was adapted as an HQ and the other official residence and the tunnels in the Owl Mountains were planned as a network of underground factories.

So what is on the train?

Poland’s Deputy Culture Minister Piotr Zuchowski previously told reporters that he had been informed the buried train was more than 100 metres long, and that he had seen an image from a ground-penetrating radar that appeared to show the outline of an armored train. A Polish Military Museum says it has received an excellent quality ground radar image that shows the gold train in fine detail.

The claims from the finders of the ‘Nazi Gold Train’ is that it could contain the Amber Room as the Daily Mail reported.

The treasure hunters who found the Nazi gold train today claimed for the first time that the long-lost £250million Amber Room could be inside. Piotr Koper and Andreas Richter discovered the train close to the small town of Walbrzych in south-west Poland after a German man revealed its location on his deathbed.

It is thought to be laden with gold, looted paintings and one noted author went as far to claim that it contained the Amber Room of the Russian Czars which was looted from a Russian palace by Nazi troops in 1941.

The lawyer that represents the two men claiming to have found the train has backpedalled on claims it contains gold. Instead, he told local television last night; it may contain ‘valuable minerals.’

According to the Daily Express – A Polish expert has warned that the fabled ‘gold train’ of Walbrzych could actually be loaded with Nazi chemical agents that were being transported to defend Berlin in a last-ditch stand against the advancing Red Army.

Stanislaw Popiel of the Military Technical Academy of Warsaw told Poland’s Gazeta Wroclawska newspaper that the nerve gas Tabun could be among the doomsday weapons aboard the buried freight cars.

“We will be 100 per cent sure only when we find the train,” Zuchowski later qualified to CBS news.

To our knowledge, the tunnel was discovered by the same two men who claimed to have found the ‘gold train,’ said the report. It said using a 1926 railway map; they found that the tunnel lies near to the former railway station in Walim, reports the Daily Mail.

Watch the drone footage of the area here