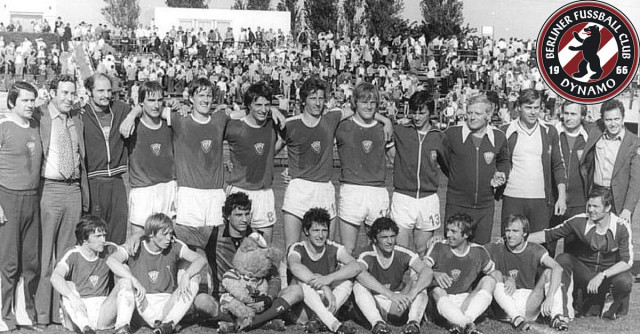 Back in the days of the USSR and the German Democratic Republic, East German football teams were often named after the factories they represented.

The word ‘Dynamo’ in a club’s name meant that it was associated with the Police, and Dynamo Berlin was the most famous of these – it was the football club run by and for the Stasi, the feared and hated East German secret police.

BFC Dynamo’s most ardent supporter was the East German Minister for State Security Erich Mielke, a man with a reputation for cruelty and violence. In 1930, Mielke had taken part in the bloody purges ordered by Stalin, Russia’s notorious Communist dictator.

Eager to please his master, Mielke didn’t flinch from the task, he killed a man in 1931 – a crime for which he was finally tried for when East Germany collapsed.

Mielke arrived in East Berlin after the war with a fearsome reputation as Stalin’s enforcer. It had been the fashion in Russia to append the name ‘Dynamo’ to football teams, and Mielke saw no reason not to do the same in East Germany.  Dynamo Berlin was the result.

Determined that his team should glorify the success of the Soviet socialist system, Mielke set about transferring the very best players from other East German clubs to Dynamo Berlin regardless of whether or not the other clubs agreed.

In 1954, he decided that all of the Dynamo Dresden players should transfer to his new team, and so it happened. The club was a law unto itself – games were rigged, penalties were wrongly awarded, and Dynamo Berlin was virtually unbeatable. They won the Oberliga, East Germany’s Premier League, for 10 years in a row between 1979 and 1988.

It was also detested throughout East Germany, but nobody did anything about it for fear of Stasi reprisals.

Since the collapse of the German Democratic Republic, the club – since renamed BFC Dynamo has been a shadow of its former self in terms of successes. It is nowadays a minor force in German football’s fourth division, but its fans are devoted to the club.

Exhibiting the faith so often seen in football fans, they believe their beloved club can rise to glory again, this time without the support of a vicious and corrupt secret police chief.