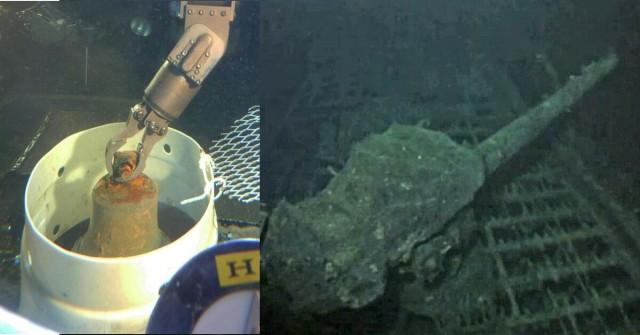 Researchers have recovered the bronze bell of a Japanese submarine that was intentionally sunk off the coast of Hawaii by U.S. forces 70 years ago.

The wreck was an I-400 World War II Imperial Japanese Navy mega-submarine. Four hundred feet long, the I-400 was known as a “Sen-Toku” class submarine, the largest ever built before the development of nuclear-powered subs in the 1960’s. This particular ship had been lost since 1946.

“It was an exciting day for the submersible operations crews of Pisces IV and Pisces V,” said Terry Kerby, HURL operations director and chief submarine pilot.

Georgia Fox, an archaeologist at California State University-Chico, received an underwater archaeological research permit from the Naval History and Heritage Command. “We had only one chance to relocate and recover the bell,” said Kerby.

The U.S. Navy captured five Japanese subs, including the I-400. When the Soviet Union demanded to be allowed access to the subs under the terms of the treaty signed at the end of WWII, the Navy instead sank the subs off the coast of Oahu in order to keep the advanced technology away from the Soviets. HURL has since located four of the submarines.

“These historic properties in the Hawaiian islands recall the events and innovations of WWII, a period which greatly affected both Japan and the United States and reshaped the Pacific region,” said Hans Van Tilburg, maritime heritage coordinator for the National Oceanic and Atmospheric Administration in the Pacific Islands region. “Wreck sites like the I-400 are reminders of a different time and markers of our progress from animosity to reconciliation.”

After a long process to stabilize it, the bell will be displayed at the U.S.S. Bowfin Submarine Museum. Included in the display will be binoculars and other artifacts from the I-400.

“The recovery of the bronze bell from the I-400, and its eventual display at the U.S.S. Bowfin Submarine Museum, gives us a chance to share this history with more than 300,000 annual visitors, many from the Pacific region,” said Jerry Hofwolt, museum executive director. “What was once an artifact on the seafloor will now be a national historic maritime treasure for all to see.”