French pilots used to drop arrows (Flechettes) from their aircraft, and upon hitting a surprised soldier down below could puncture his body from head to toe. Curious to see what one of these arrows looked like? An image (photograph) was featured on 23rd January, 1915 in The War Illustrated and had a full description of these arrows. 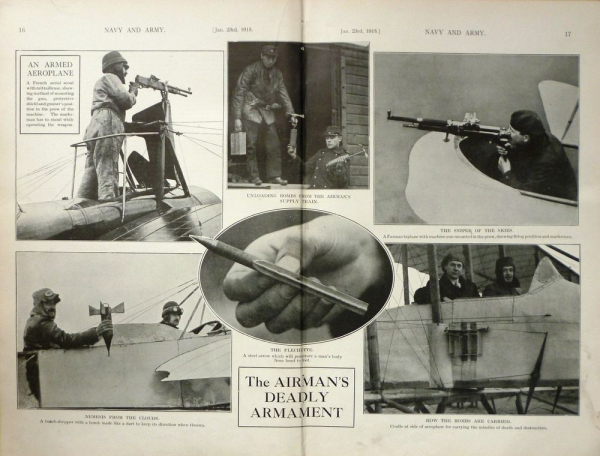 “They are pieces of steel rod about six inches long, sharpened at one end like a pencil, and with the four and a half inches or so at the other end machined out so that the whole thing has the section of a cross…which is, of course, very much lighter than the front end, and so acts just as a feather of an arrow.”

These metal arrows (made from steel) were boxed up in batches of 500 at a time and then put across the top of a hole that was within the aircraft. Once above the intended target, the Flechettes were dropped in a steady stream; a string was pulled, and these were released. Once these hit the ground below, they could cover an area as large as 10 yards x 50 yards!

“A friend of mine was at the military aerodrome at St. Cyr some little time ago, when some of these arrows were being tested, with an unfortunate cow as the enemy, about three arrows struck the cow, and went clean through her into the ground, after which the cow died quite suddenly.’

The War Illustrated claimed that the Royal Flying Corps absolutely refused to use these arrows against their enemy (the Germans) because “Our aviators think arrow-dropping dirty work…because the enemy cannot hear the things coming, and because they make such nasty wounds. Also, it was not possible to drop them with sufficient accuracy.” The paper subsequently noted, “nevertheless against cavalry or infantry in anything like close formation they certainly are effective, as the French have proved.”

The Aeroplane’s editor informed his readers of a ‘German surgical paper’ which had written an in-depth article regarding the effects of the arrows on troops. The report stated “If one hits a man on the head it will go straight through his helmet into his brain. If hit on the shoulder it will probably glance off the shoulder blade and go straight through the lungs, and get mixed up with other parts of the anatomy.”

A German soldier, unlucky enough to have been on the receiving end of a Flechette attack stated: “if there was any arrow-dropping going on it was actually safer to be flat on the ground, because although one covers a greater area the arrow that does hit home will have less chance of going through several organs”

Mr. Grey, in early 1915, stated that he considered the Flechette to be a weapon in the War of little consequence. As time went on the less was heard of these attacks occurring; although its use was shown on a postcard following an artist’s impression of such an attack.

Many wonder if the French used Flechettes to attack the Germans in August 1914. There were a few reports that British troops had noticed ‘dead Prussians wounded by arrows…on the battlefield’ during their retreat from Mons. If this was true it would lend credibility to the tale by Machen of ‘the Bowmen’ and ‘The Angels of Mons’. 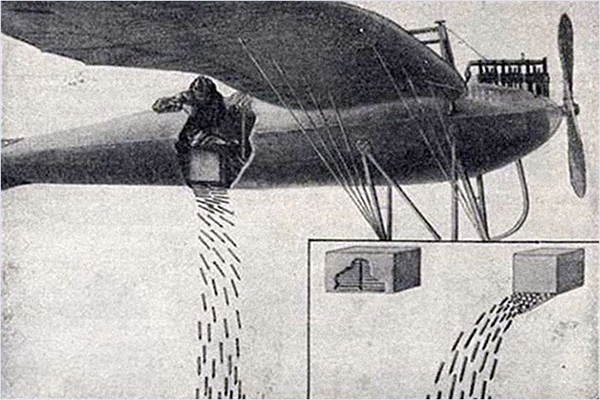 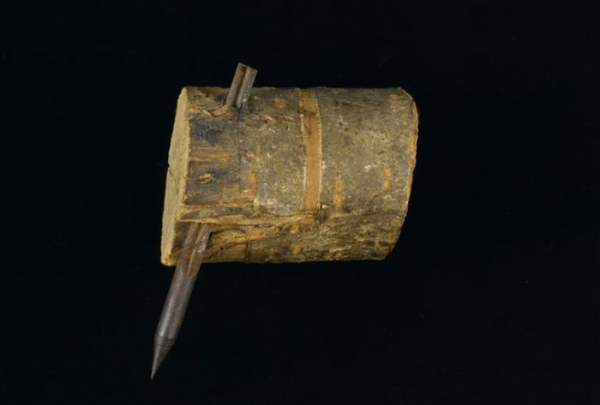 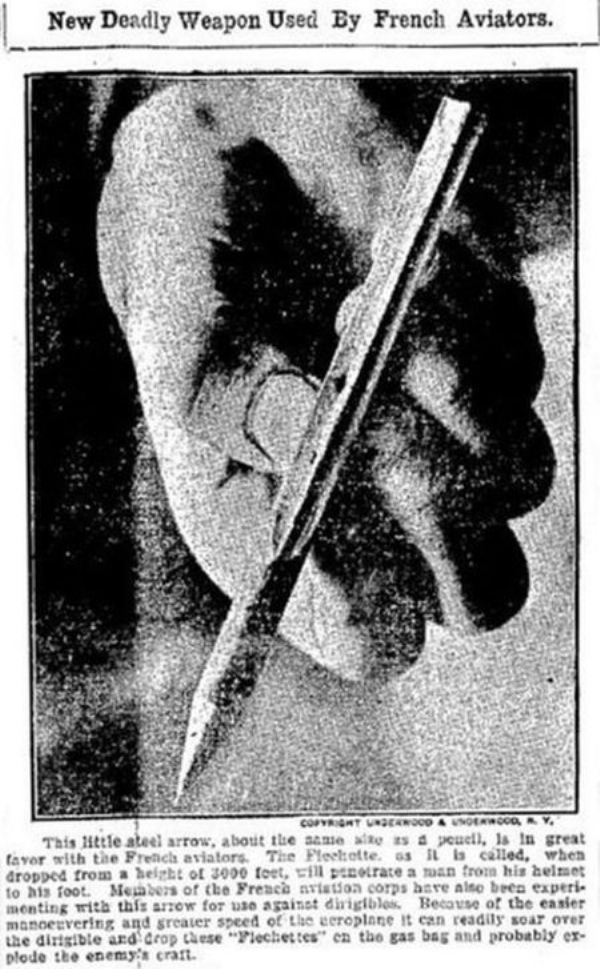 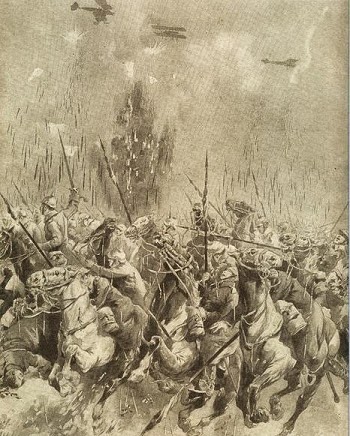 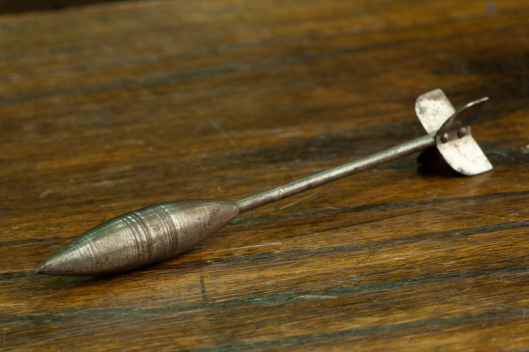 One German soldier, who had been on the receiving end of a steel arrow attack said, “that if there was any arrow-dropping going on it was actually safer to be flat on the ground, because although one covers a greater area the area the arrow which does hit home will have less chance of going through several organs.”
In early 1915, Mr Grey said that in view of the uncertainly of hitting a man with the much larger missile, the bomb, it was hardly likely that the flechette will prove a weapon of “any serious consequence in the war.” As the conflict progressed, little more was heard of the flechette. However, its use was recorded on a postcard by an artist’s impression.

Did the French drop flechettes on German troops in August 1914? There were reports that during the retreat from Mons British soldiers had seen “dead Prussians wounded by arrows…on the battlefield.” If the stories were believed, they would certainly have added credence to Machen’s tale of The Bowmen and the subsequent story of The Angels of Mons. 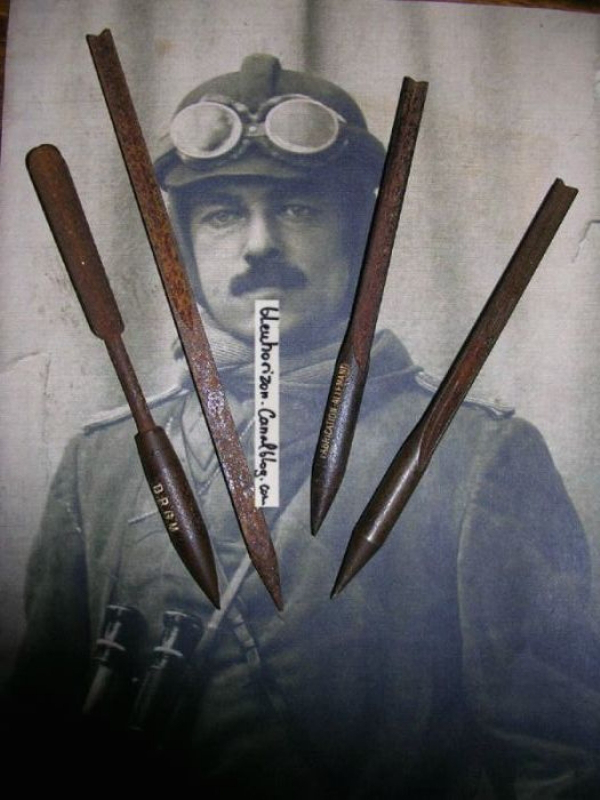 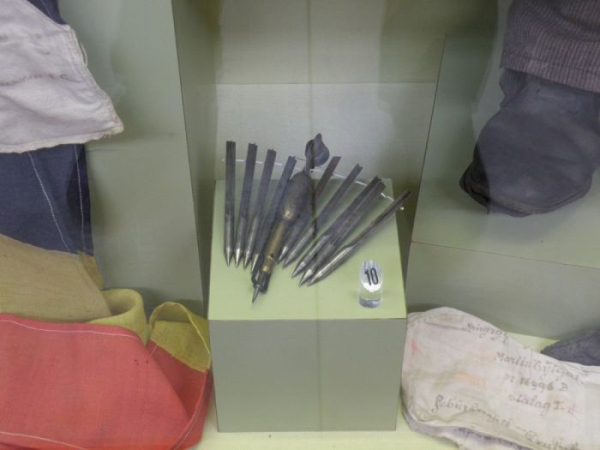 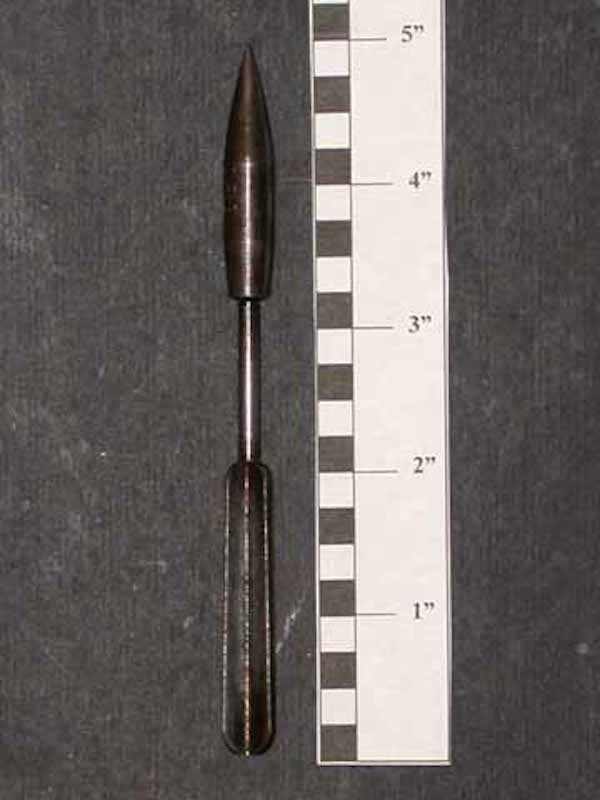 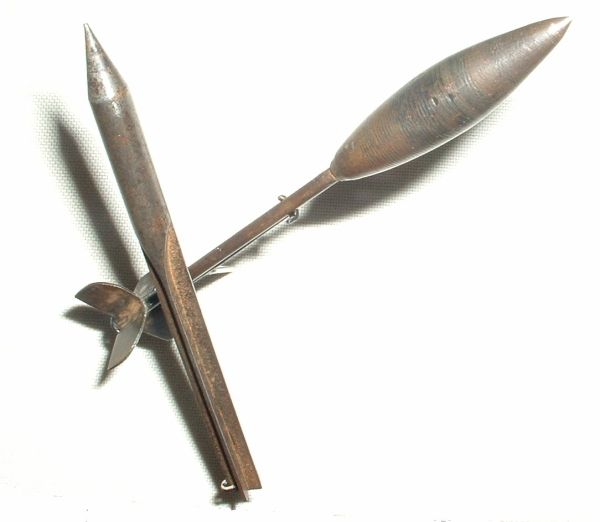 During the Vietnam War the United States employed 12 gauge combat shotguns that were used with flechette loads that consisted of around 20 flechettes per shell. 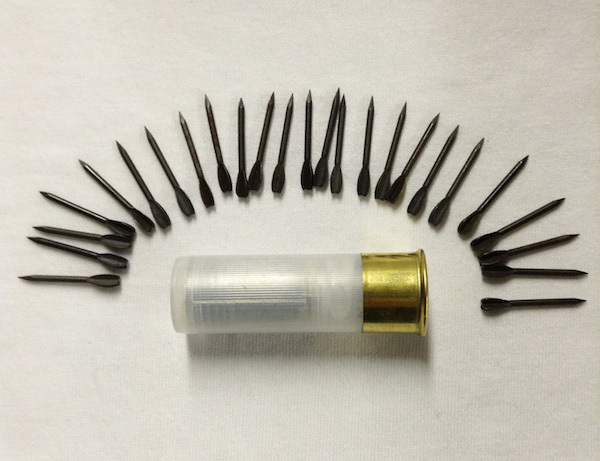 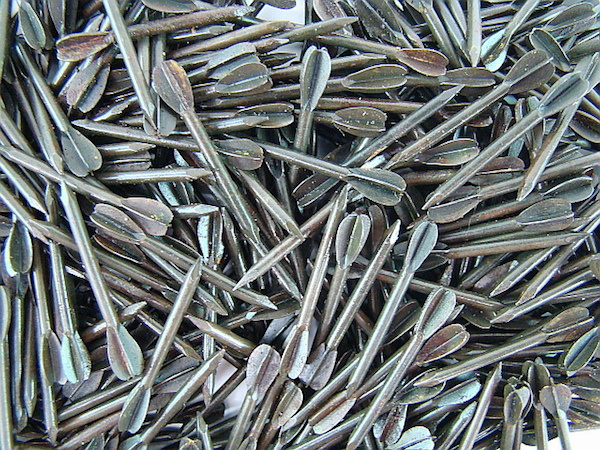 The 70 mm Hydra 70 rocket currently in service with the US Armed forces can be fitted with an anti-personnel (APERS) warhead containing 96 flechettes. They are carried by attack helicopters such as the AH-64 Apache and the AH-1 Cobra. 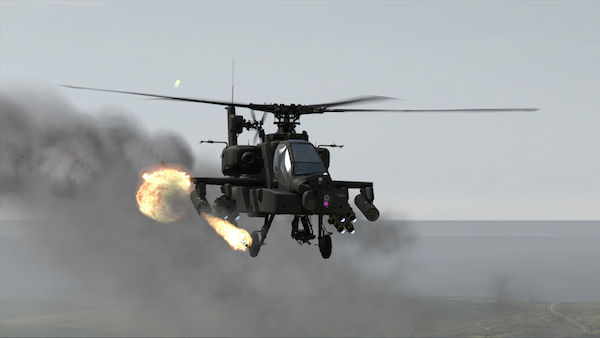 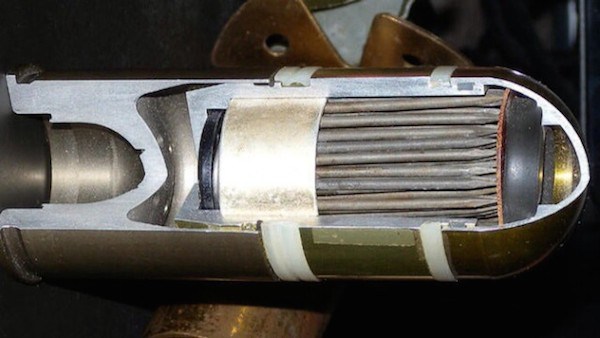