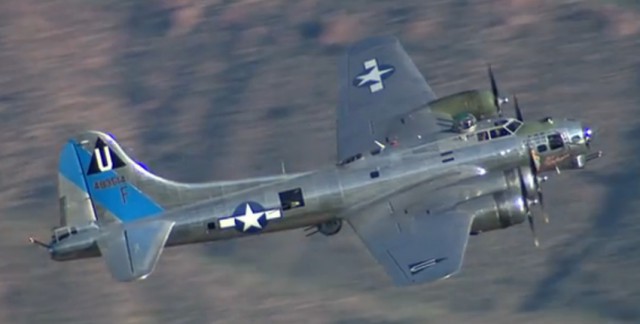 The unique story of a B-17 bomber that was destroyed during World War Two has emerged.

Steve Memovich was a US Air Force pilot in the B-17 bomber during the war and survived when the aircraft crashed into a glacier.

More than 70 years after his aircraft crashed he received an envelope in the post which contained his silver bracelet with his name, serial number and the inscription – Always yours, Marilyn. The bracelet had belonged to Steve, but he had lost it when his B-17 crashed all those years ago.

Steve and his crew had taken off from an Allied base in Iceland in 1944. They were heading back to a base in Scotland, but they ran into bad weather and the B-17 was literally knocked out of the sky in a blizzard and they landed in a glacier known in Icelandic as Eyjafjallajokull.

Luckily, all 10 of the B-17’s crew survived and they were rescued from the glacier.

Steve continued to fly in the US Air Force throughout World War Two and flew a total of 35 missions. When the war ended Steve returned to his home town of Vancouver in Washington (USA). He was married to his wife Marilyn and he became a lawyer.

The wreck of the B-17 remained stuck in the glacier and over the years became covered in snow and more ice until it was completely entombed. But during the 1990s a local farmer came across the wreck after seeing scraps of metal on the surface of the ice. Since then the glacier has gradually begun to melt away, and locals started scraping the ice away to reveal more metal and parts of the aircraft. That is when they also recovered the bracelet belonging to Steve.

The bracelet was returned to US authorities who ensured it eventually made its way back to Steve’s home in Vancouver, Washington.

Steve died earlier this year, while his wife Marilyn died in 2011.