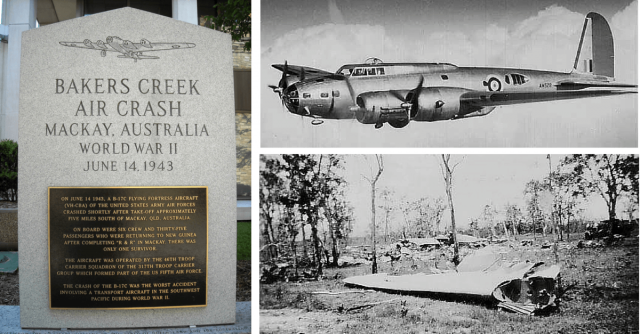 It is hard to accept that during history’s most horrifying war, the deadliest aircraft crash was not caused by enemy fire. Killing 4 crewmembers and 35 passengers, B-17 Flying Fortress reportedly plummeted to ground shortly after its take off. The cause of the crash is still unknown, but those who died are certainly not forgotten.

72nd Remembrance ceremony for the fatal crash that took place on June 14, 1943 was held at the Bakers Creek Air Crash Monument. The monument is adjacent to the Selfridge Gate entrance of Arlington National Cementry.

The soldiers on-board the unfortunate bomber were only returning from a period of rest and relaxation from the war. Their destination was Papua New Guinea where the soldiers were to resume their services. Shortly after taking off, the bomber crashed into the fields near Bakers Creek, six miles from the city of Mackay in Australia. This Crash is considered as the worse transport aircraft accident of the Second World War in southwest Pacific.

The memorial has a very special location in the National Arlington Cemetery, said the JBM-HH commander Col. Michael Henderson who was also present at the ceremony. He added that the rows of tombstones are the reminder of the sacrifices made by men and women during the war, and those who lost their lives in the plane crash are among those fallen for the peace of the world.

The ceremony was attended by the surviving family members of the those killed in the crash along with Soldiers from 3rd U.S. Infantry Regiment, also known as ‘The Old Guard’. The soldiers were dressed in the WWII era uniform to pay their respects to the victims of the crash. The family members of the victims also took part in wreath laying on the memorial that was built for their loved ones. The monument was built by the local people of Mackay to honor the American soldiers who died in the accident, the DVIDS reports.

The monument, considered a gift from the authorities of Mackay, Australia, was put at the joint base in 2009 bearing all the names of the soldiers who perished in the crash along with the name of the only survivor from the crash. Cpl. Foye Kenneth Roberts who miraculously survived the fatal crash died in 2004, aged 83.\