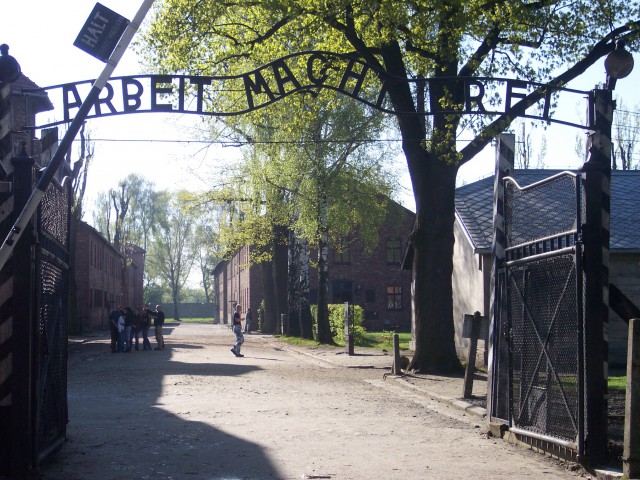 The main entrance to the Auschwitz I camp [Via]

The Auschwitz-Birkenau Memorial and Museum was established after World War Two to document and memorialise the Holocaust.

Artefacts kept in the museum include more than 100,000 shoes, over 3500 suitcases, almost 250 shawls, and over 8000 prisoners’ letters, as well as thousands of Nazi documents.

The scale and number of artefacts are so immense, considering that over one million people died at the Auschwitz concentration camp, but the museum does everything it can to preserve and store each and every item.

While museum staff can get caught up in the magnitude and history of what happened at Auschwitz, they say that they are there to do an important preservation job that will ensure the Holocaust is never forgotten.

However, one museum staffer says that sometimes it hits them and they start to think about the prisoners behind the artefacts. One example includes a conservator who was conserving a pair of child’s shoes and he came across a small piece of paper that was a school maths test.

Around 60 conservationists work at the museum, and they are also responsible for maintaining the Auschwitz camp for visitors. They have to preserve and maintain the buildings which can be difficult as they were never built as permanent structures.

The barrack buildings were prisoners would stay were only demountable buildings that were never meant to last for over 70 years. But the museum remains committed to maintaining the site.

It was Soviet Red Army troops that liberated both Auschwitz and Birkenau concentration camps in Poland at the beginning of 1945. Part of the camps were dedicated to solely exterminated the Jewish prison population, whilst other sections were built to house other prisoners including Polish, Soviets, gypsies, politicians, homosexuals and slave labourers.

After the end of the war, Poland cam under Soviet-Communist control and the camp and nearby village was left to rot. It wasn’t until 1989 when the Soviet government was overturned and a democratic government was elected to Poland. It was then that imore and more visitors came to visit Auschwitz and conservation of the site really began, the USA Today reports.

While some historians argue that Auschwitz shouldn’t be preserved, the museum stands fast in its commitment to conserving the historical site and documenting the devastating killings that took place. Today, thousands of visitors flow through the camp to learn more about what happened there.