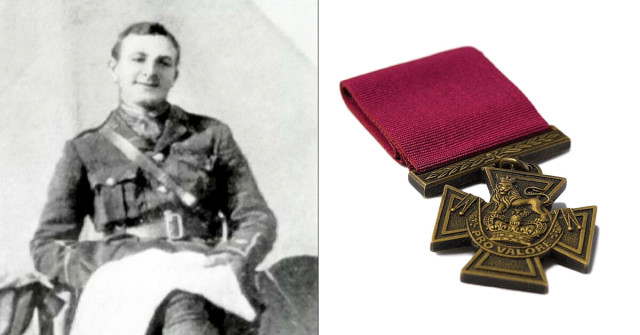 Lieutenant Colonel Philip Bent served his country heroically in World War I, but sadly was killed in the line of duty. His Victoria Cross was donated to his old school with the hope of inspiring all the future generations who walk through those same hallways. It has been almost 100 years since Colonel Bent was killed, and his grammar school has many people up in arms about a recent announcement it has made. The school has placed his medal up for sale in the  hopes of obtaining the necessary funds to build a new sports arena.

Lieutenant Colonel Philip Bent was wounded twice while serving in the war. Even after sustaining a bullet to his neck, this soldier rejoined his men just eight days later. He died at the age of 26 while commanding his regiment, but prior to his death he was awarded the Distinguished Service Order (DSO). The Victoria Cross is the highest military honor a soldier or civilian can be awarded for extreme bravery. Colonel Bent received this honor after he was killed, but his mother collected her son’s accolades at Buckingham Palace.

The colonel’s descendants have been openly upset as they claim the school. A local museum labeled the initiative as “immoral.” Ashby School, located in Leicestershire, was the recipient of Colonel Bent’s award. He was shot in the midst of leading fellow soldiers in a counterattack in Belgium near the end of the war in October 1917. Story has it that Colonel Bent yelled, “Come on the Tigers!” in hopes of motivating and rallying the men he was leading in the charge.

The soldier’s mother donated to his grammar school this medal along with four others. She made it very clear that this donation was intended to inspire the next group of young minds to walk through the school doors (including the boys who stay in the dormitory facilities). The academy has since announced that it plans to auction off the entire set of medals, which have a projected value of over 150,000 Euros.

Many are not happy with this decision, including the soldier’s family. They have expressed their criticism openly, because they have not even been consulted on the matter. To this veteran’s family, the sale of these medals is flat-out wrong. Bent’s great nephew reiterated the family’s distaste for this decision when he dubbed it completely erroneous.

Captain Tim Wilkes, chairman of trustees of the Royal Leicestershire Regiment, agrees with the family. He feels it would be very wrong to sell the medals against the wishes of this hero’s family. The regiment has gone as far as questioning whether or not this school has the legal right and claim to these medals.

Keith Willis, one of the few living relatives of this fallen soldier, explained that the school did not even attempt to reach out to him about their plan. He is 54 years old, living in Lymington, Hampshire, and is bitterly opposed to the school’s auctioning off his uncle’s medals..

Ashby Academy is a large school that could easily raise the funds for the sports arena. Despite the medals high value, the total is really insignificant to a school like this.  Willis believes the school needs to prove they have rightful ownership to these medals. In the letter this soldier’s mother provided it clearly says “look after these and display them for the ideas they stand for.” However, not one word identifies or hands over ownership.

The trustees of Ashby de la Zouch Museum have even reached out to the school in hopes of igniting reconsideration. They targeted the school’s headmaster Eddie Green, as they pushed the immoral component of the situation. The message from the trustees basically asserts that the legal right to go forward with an action does not make it a moral action.

Ashby School received the medals way back in 1923 from the fallen veteran’s mother. Her words were powerful and clear. As a mother who just lost her son she was seeking the opportunity to find meaning in his death. Her hope was that his actions could inspire future generations to achieve high ideals. Each of the medals was very much on display until the 1970s, but due to insurance costs the medals were moved into a bank vault. The school has openly admitted to their intention of auctioning off the medals.

The chairman of governors, Elaine Blunt, is in favor of the auction. She feels it could bring great things to the school. The governing body claims to understand the controversy of this situation, but agreed to the sale of the medals in a unanimous vote once the medals’ value was appraised. They feel that the sale price would certainly allow the school to be improved, which would arguably be one way of inspiring future generations. The new sports facility, they believe, will benefit the current student body of 1,714 boys and girls between the ages of 14 and 19, as well as the community as a whole.