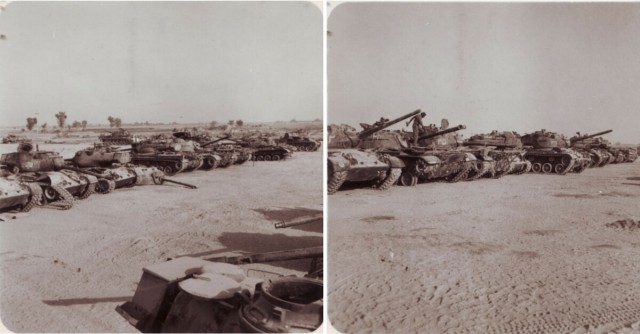 Tensions between India and Pakistan have never fully gone away, but during the 1960s they were at their highest. It was in 1965 that a full scale war occurred and Pakistan planned to take Amritsar and attempt to block supplies to the Indian Army stationed Jammu and Kashmir. They sought to take a bridge over the River Beas on the road to Jalandhar, which would prevent any supplies getting through.

The General of the Pakistani troops gave the orders to the 1st Armored Division. They immediately took Khem Karan, a town around five kms from the border.

As the attack took place Indian troops fell back and took a defensive position at the village of Asal Uttar, not far from Amritsar, from which they could attack the enemy.

The Pakistani tank division was more technologically advanced than the Indian troops and were advancing in over 300 US-produced tanks M-47 and M-48 Patton tanks. Meanwhile the Indians had less than half the same number of tanks and which were older, Sherman Tanks made during World War Two.

The Pakistanis had a false sense of security as they advanced towards Amritsar. But the Indian Army had flooded the nearby sugar cane fields with water in order to slow the advancing Pakistani tanks. It was then that they launched a massive counter attack.

The battle is now known as the ‘Battle of Asal Uttar’. The Indian Army ended up anhilating the entire Pakistani 1st Armoured Division leaving behind a field of destroyed tanks.

One of the Indian soldiers, Quarter Master Havildar Abdul Hamid who was fighting with the Four Grenadiers Battalion single-handedly took our four enemy tanks and stopped them from advancing. As the enemy tanks tried to drive through and past the Indian defences Hamid took out three more tanks.

Hamid was killed during the battle but was posthumously awarded with the Param Vir Chakra, India’s highest military honour, the ZEE News reports.

Military historians view the Battle of Asal Uttar as a pivotal point in the war of 1965 war, of which Pakistan never fully recovered.

The Golden Jubilee of the battle took place this year with commemoration events in New Delhi throughout September.