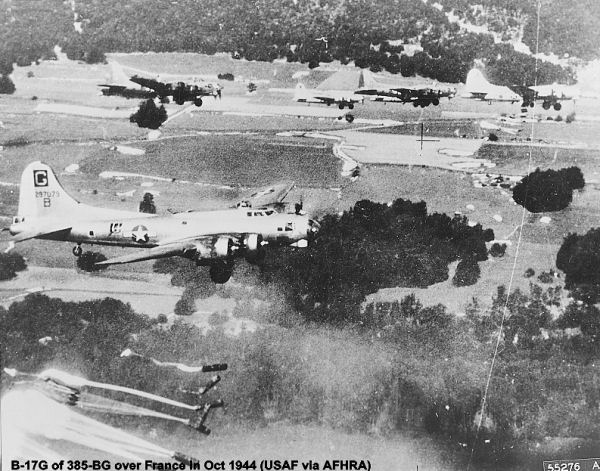 Art Schaefer, now 93, attended the University of Arizona with the intention of going into the mining industry, but fate took a hand and changed the course of his life.

Like all men at the time, Art entered a compulsory Reserve Officers’ Training Course (ROTC). The ROTC program was a result of the Morrill Act of 1862, which required that colleges include military tactics as part of their curriculum. At the end of his course, Schaefer decided to volunteer for advanced training. He subsequently joined the 385th Bombardment Group as a navigator, and in 1945 he found himself on his way to an air-base in England.

USAF 385th Bombardment Group (Heavy) was formed on 2nd November 1942, and crews began training on B17s. The aircraft was a heavy bomber which saw service with the United States Army Air Force in the daylight precision strategic bombing campaign of World War II against German industrial and military targets, and to a lesser extent against Japanese shipping and air bases in the Pacific. When he saw the first complete aircraft leaving its hangar in 1935, a newspaper reporter dubbed it The Flying Fortress. The name stuck; Boeing even registered it as a trademark.

The 385th operated primarily as a strategic bombardment organization until the war ended. During March and April of 1945 the group bombed German troop concentrations and radio-communication centers in Germany as part of the final Allied forces thrust into Germany. Art clearly recalls how tailwinds helped them get to targets quickly, but on the return flight they were battling against the headwind.

On one occasion the squadron came under attack over Dresden. Three of their aircraft were shot down, and Art became a temporary nose-gunner, shooting down one enemy aircraft and damaging another, the Tucson.com reports.

As the war drew to a close, the 385th Bomb Group and the Royal Air Force carried out food drops over Holland. German troops had flooded the fields to stop farmers from growing crops.  Art’s crew was one of the “candy bombers”, so called because they included sweets for children in their food drops. As they flew a mission on VE day in May 1945 they saw the words “Thank you” spelled out in large stones on the fields below.

Returning to America after the war, Art served as a test navigator at an Air Force Base. When he was honourably discharged he completed his mining degree, and spent the rest of his working life inspecting mines all over the world.