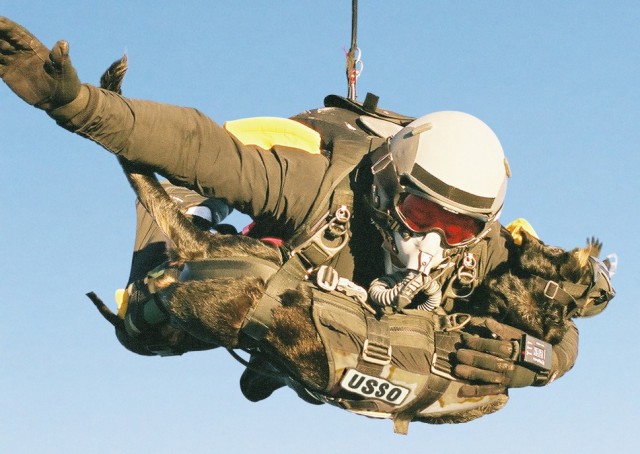 Most people know that NASA used animals to send to the moon and on other missions before committing human beings to space. However, people do not realize that the army uses animals for parachute missions.

In 1948, a pilot and a conservation officer of the Idaho Fish and Game Department took up a small plane with eight crates of beavers. They were flying to the Chamberlain Basin, which was a perfect habitat of mountains, streams, lakes, and forests for the relocation of the animals.

The crates of animals were thrown out the door of the plane – don’t worry, the crates had parachutes and floated safely to the ground. One of the men made a full report of the drop and said that the best altitude would have to be between 500 and 800 feet.  Specifically used for relocating, that altitude allows the parachute to set the box down gently without harming or shaking up the beavers too badly.

The report claims the Beavers were a nuisance to the McCall community and the two men decided the animals would thrive at the basin.  However, the basin wasn’t accessible to airplanes for landing, so the men had to come up with something else that would work.  That’s how they came to build the special crates with their individual parachutes.

One man said that they first tested the crates and parachutes by using weights instead of live animals.  They then used one of their friendly beavers named Geronimo and dropped him in a field to test the system.  The men then watched the beaver successfully climb out of the crate without any issues.  The beaver ended up getting so used to the trials that after climbing out of the crate, he’d just get right back in and get ready to parachute again.

Nearly 76 drops were made in several flights.  The men then followed up with the relocated beavers and said that the animals successfully made the basin their new home without any issues.  While the first trips were reported and talked about as an odd experience, many conservationists use the same method today without fanfare.

A town in Utah had experienced massive snow storms that stranded one community.  Along with that issue, there were ranchers whose sheepdogs had died from coyote poison, leaving the ranch without the help of its dogs.  The Civil Air Patrol decided to parachute sheepdogs to the ranches that lost the dogs.  On February 12, the operations “Doglift” and “Para-Pup” went to work, dropping the sheepdogs.  The report says the dogs parachuted without a cry or a whimper and landed safely in soft snowbanks.  The dogs were then retrieved by the sheep ranchers who needed them.

During WWII, the US Army decided to experiment with a new weapon called “bat bomb.”  The bombs were hibernating Mexican Free-tailed bats with bombs attached.  The bombs were to be floated into Japan on parachutes.  The bats would then find attics to hibernate in and eventually the bombs would detonate, causing fires.  Used in hard-to-reach areas, this method was most likely to burn a building down.

Another plane drop was made in the 1950s when Borneo was taken over by malaria.  The World Health Organization planned on spraying DDT to kill the mosquitoes.  DDT is now known for the potential health risks but was thought to have been a good idea at the time.  DDT is now banned in the United States.

A professor at the University of Iowa, who researched the DDT operation, dubbed it Operation Cat Drop.  It was called that because the DDT ended up taking out a lot of living things, included domesticated cats.  Killing off so many cats caused the rats to flourish.  Without cats killing the rats, Borneo suffered from even more.  That is when the World Health Organization decided to drop kittens in to replace the cats.

Some of the old reports say that there were 20 cats dropped, others say there were 14,000.  Reports also say they arrived in containers, and others say they were in baskets.  The first round of kittens died from eating contaminated cockroaches.

In 1962, an Air Force base in California launched a bear at supersonic speed from a jet bomber.  The bear flew through the air at 870 miles an hour at 35,000 feet.  It was used in the experiment because its weight was close to that of a human, and it ended up landing safely due to its parachute.  It took seven minutes and 49 seconds for the bear to land.

During the same year two monkeys, four hamsters, and a Labrador went on a 2,000-mile balloon ride, courtesy of NASA.  The trip was to see if there was any radiation danger before sending people to the moon.  Unfortunately, the monkeys and hamsters died during the trip and the cause of their deaths researched.

The animal that has been most used for parachuting is the dog.  The military started experimenting with parachutes and dogs by sending them over enemy lines during WWI.  Dogs are still being used in the Army today.  The German Shepherd is still being used, and these are considered trained parachutists, even doing solo jumps.