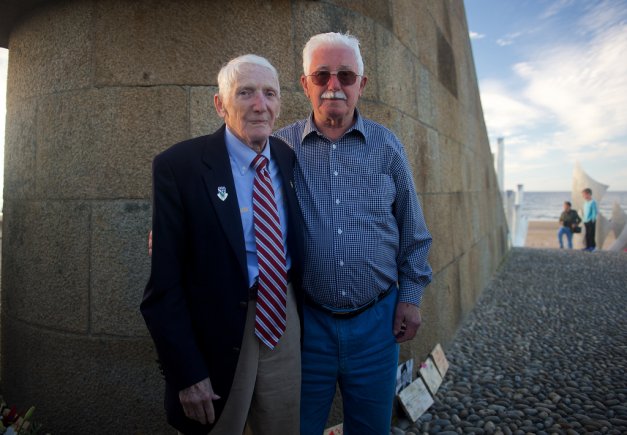 American and German veterans have been making World War Two commemoration trips back to iconic war locations to exchange memories and honour their comrades who lost their lives.

Jim Martin, a US airborne veteran and Erich Bissoir, Waffen-SS veteran both recently returned to Omaha Beach, where the D-Day landings took place back in 1944.

The meeting has been set up in order to foster relations and highlight the friendship of two countries which were at war with each other 70 years ago.

The two veterans were able to spend an evening together and over dinner they discussed their respective roles and experiences of the war. Martin had taken part in the D-Day landings and had been parachuted in behind enemy lines in France as part of the 101st Airborne Division. Meanwhile Bissoir had been on-the-ground defending Nazi-occupied France from the incoming Allied invasion.

The two veterans signed then and now pictures which showed them as they were 70 years ago and how they are today.

The meeting took place at Omaha beach, which was one of the bloodiest battlefields during the D-Day landings. The beach was overlooked by steep, vast cliff edges and US troops were easy pickings for the German soldiers protecting the coastline.

Bissoir had been a member of the Hitler Youth, which was a group especially set up for Germany’s young people and would foster the values of the Third Reich, the U.S. ARMY reports.

When he was old enough to join the armed forces, Bissoir enlisted with the Waffen-SS and was sent for training. He also undertook motorcycle training and specialized in motorcycle reconnaissance. He had been despatched to the northern French town of Caen, as the Nazis became suspicious that the Allies were about to launch an attack.

Bissoir says that they all knew the Allies would invade at some point, but no one knew exactly when or where. Bissoir’s regiment was woken in the early hours of the 6th June 1944 and called to alert as the Allied paratroopers had been dropped within German territory.

Bissoir recalls how they were sent straight into the frontline with the Allies and they started to suffer casualties. He says that they did not have enough air reconnaissance so they could not tell where the Allies were or where they were heading.

Even though Martin and Bissoir fought in the same general area, they never fought each other directly.