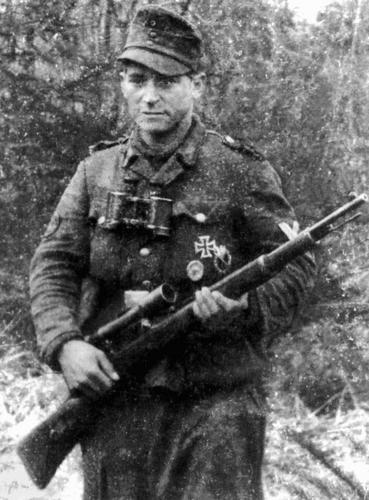 Jozef Allerberger was born in the vicinity of Wals-Siezenheim, Austria, on 26 December 1924 (although in his memoirs he states he was born in September), the son of a local carpenter. Sent to the Eastern Front in June 1943 as a machine gunner, Allerberger was lightly wounded at Stavropol and experimented with a captured Soviet Mosin-Nagant 91/30 rifle with a 3.5x PU telescopic sight whilst recuperating. Eventually he made 27 kills before being sent for sniper training at Seetaleralpe, and being assigned a Karabiner 98k sniper variant with 4x telescopic sight. At the end of the War he would often use a Gewehr 43 with ZF4 4x telescopic sight and an MP40 submachine gun.

During combat, Allerberger was noted for using the Wehrmacht-taught technique of an umbrella with the cloth removed and foliage woven into the arms which he held to his front in order to camouflage himself. This camouflage was quickly assembled and lightweight and adaptable to many circumstances. 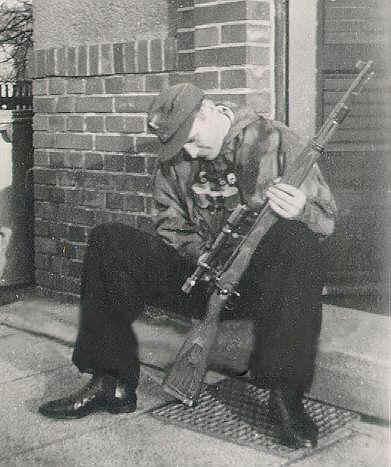 In 2005, a book titled Sniper on the Eastern Front: The Memoirs of Sepp Allerberger, Knight’s Cross ISBN 1-84415-317-7 was published, written by Albrecht Wacker based on interviews with Allerberger. The book was noted for suggesting that the Soviets had cannibalised their own comrades’ corpses, and graphic depictions of torture. This translation into English is an abridged version of the book Im Auge des Jägers. The first three volumes of this work appeared under the title Der Wehrmachtsscharfschütze Franz Karner, as Allerberger was initially reluctant to be named.

According to his memoirs, Allerberger was awarded the Knight’s Cross of the Iron Cross by Field Marshal Ferdinand Schörner, the commander of Army Group Centre, on 20 April 1945, although no official documentation ever recorded the award. However, this was not uncommon at this late point in the war.

After the war, Allerberger worked, like his father, as a carpenter. He died on 1 March 2010 in Wals-Siezenheim. 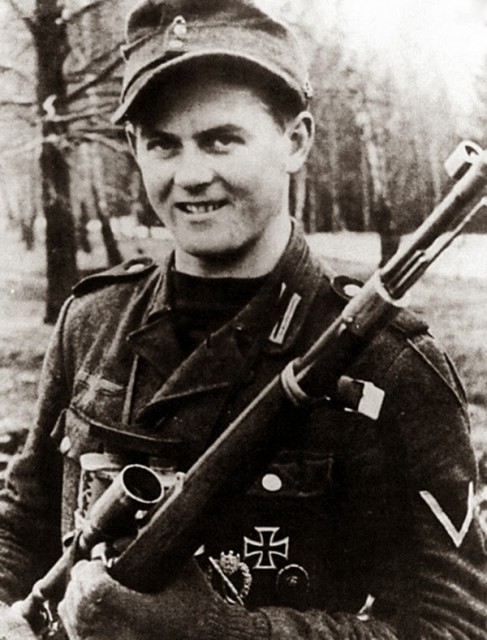 After spending most of 1943 in basic training, Hetzenauer trained as a sniper during March – July 1944 at the Truppenübungsplatz Seetaler-Alpe in Steiermark, before being assigned as Gefreiter to the 3rd Gebirgsjäger Division. He utilised both a Karabiner 98k sniper variant with 6x telescopic sight and a Gewehr 43 with ZF4 4x telescopic sight. He saw action against Soviet forces in the Carpathians, Hungary and Slovakia.

On 6 November 1944 he suffered head trauma from artillery fire, and was awarded the Verwundeten-Abzeichen three days later.

On multiple occasions he served with fellow sniper Josef Allerberger. They were able to inflict heavy casualties on Soviet infantry.

Gefreiter Hetzenauer received the Knight’s Cross of the Iron Cross on 17 April 1945. Generalleutnant and Divisions commander Paul Klatt had recommended Hetzenauer because of his numerous sniper kills, which totalled two enemy companies, without fear for his own safety under artillery fire and enemy attacks. This recommendation was approved by General der Gebirgstruppe Karl von Le Suire and General der Panzertruppe Walter Nehring.

Hetzenauer was captured by Soviet troops the following month, and served 5 years in routinely appalling conditions in a Soviet prison camp.

He died on 3 October 2004 after several years of deteriorating health.