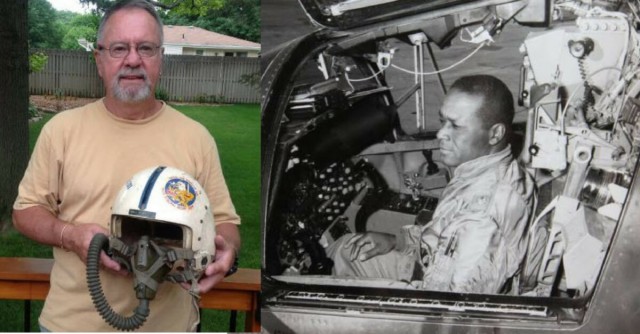 James Randall was shot down over North Vietnam in 1965 as he was leading a routine mission to destroy a bridge in a border town called Dien Bian Phu.

Randall had enlisted in the Army in 1945 and was among the first African-American pilots to be trained at the Tuskegee Army Airfield in Alabama.

On the day he was shot from the sky, he was leading a force of four F-105 fighter bombers as part of Operation Rolling Thunder, which was attempting to weaken Vietnam’s extensive anti-aircraft campaign by targeting their supply and transportation routes.

Eight thousand feet in the air, Randall’s team made their descent to drop their bombs on the targeted bridge but, as he ascended, anti-aircraft guns struck the tail of his plane. He had no choice but to eject from his plane as it travelled at 600 mph – the air current was so strong it ripped of Randall’s watch and gloves.

Touching down relatively safely, Randall ran for cover in the undergrowth of the jungle. He peered from the bushes as Vietnamese soldiers picked up his helmet and gear and began scanning the area, searching for him. When it was safe, Randall ran up a hill where he was able to radio for help. Just two hours later an American rescue helicopter retrieved him, returning him back home to the United States within days.

Randall often wondered what happened to the gear he left behind in the Vietnamese jungle that day. He even thought of making a trek to Vietnam to try and search for it, but judged that it would all be long gone by now.

But while Randall dreamed of finding his lost helmet, his helmet was also trying to find its way back to him. In 1990 Dominique Eluere, a French expatriate living in Vietnam, bought the helmet at a thrift store in Ho Chi Minh City – 1,000 miles from where the helmet was abandoned.

By a stroke of luck, Eluere was also a student of military history and felt like it was his duty to return the helmet to its rightful owner. He searched through history books and the internet. He would even accost random Americans touring in Vietnam for information. It became sort of a quest for Eluere.

Finally, with the help of a journalist, he was able to identify that the helmet belonged to a Maj. Randall from the 562nd Tactical Fighter Squadron. In a sequence of serendipity,  Eluere befriended Gregg from Nebraska, a Vietnam Vet who had experience tracing the whereabouts of troops missing in action.

After posting a call-out in the “Vietnam Veterans of America” magazine, Gregg was contacted by an officer in Randall’s former unit, confirming that Randall was still alive and providing details on how to contact him, The Gazette reports.

Gregg contacted Randall immediately and gave him the surprising good news. After almost half a century of daydreaming, Randall’s wish was finally coming true. “I couldn’t believe it, I was elated,” said Randall. “It had been gone for 47 years. Can you even imagine?”