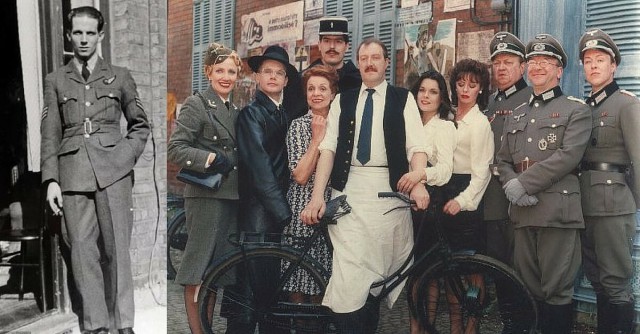 The man’s name is Len Manning, and he tells an extraordinary story of how he lived in a French café in Bassevelle for three months, hiding from the Germans.

It was in July of 1944 when Manning’s Lancaster bomber was shot down. He recalls that living in the café was a real risk because this particular café and hotel was occupied by many Germans soldiers.

‘People often liken it to the TV series ‘Allo ‘Allo! but it was a really risky experience,’

Manning is from Sudbury, Suffolk. His 57th Squadron, based in East Kirkby Lincolnshire, played a major role in the bombing of key strategic German targets to bring the Nazi war machine to its knees.

On that fateful night, he was only 19 years old and was the tail gunner of in an AVRO Lancaster. Though his bomber was shot out of the sky over northern France, luck was on his side as he was one the few survivors – four of the crew died when their plane crashed.

The plane was hit by a German night-fighter and immediately caught fire. ‘After I climbed out of the turret into the fuselage which was burning furiously, it was like looking down the flames of a blow lamp. It was the most terrifying experience of my life.’  he told the Daily Mail. ‘Although I managed to get out of the plane, the parachute had also caught fire and as a result, I was badly burned.’

He says that he parachuted from the burning aircraft at 4,000 feet with a parachute that was partly on fire. Then when he landed he had to hide from the Germans who immediately came looking for the crew of the bomber.

He was rescued by French Resistance fighters. His navigator was not so lucky as he, having been captured by the Germans and sent to a prisoner of war camp. Afterwards, he found out that four other men he was with had died.

During the months that Manning was hiding at the hotel, he kept a low profile until Americans liberated the town months later. Manning says that the Americans took the survivors to a different hotel and then flew him back to the UK, where he and a few other men were interrogated to make sure they were not Germans.

After the interrogation, he was given nine months of sick leave due to the bad burns he had sustained from the parachute fire.  After being healed, he was discharged.

He recalls that endless thoughts of death were at the back of his mind, but during the missions he could not think of that. He said he just had to concentrate and get through it all because there were shots and bullets coming from all around.

Before being shot down, Manning had completed three missions, which was enough, he said.

In 2013, he finally got the recognition he deserved. After all of the years of pushing the government for recognition. During a ceremony in the town of Ipswich, Manning was given a Bomber Command Clasp to mark the service he performed in the war. The mayor of the town, who was instrumental in pushing for Manning to get the medal, gave a speech at the ceremony.