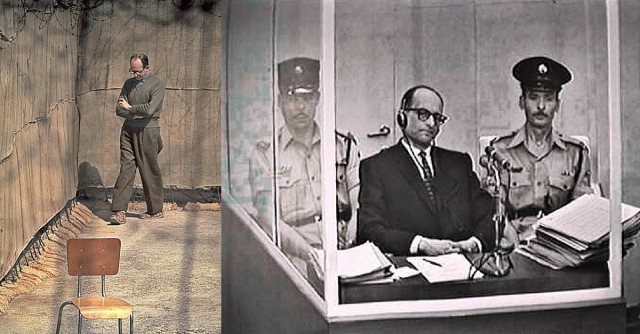 Adolf Eichmann was one of the high-ranking Nazi party’s officials. He survived the war and fled to South America where he evaded capture until the 1960s. When he was caught by Israeli intelligence services he was taken back to Israel to stand trial for war crimes. Eichmann was found guilty for his role in the Holocaust and in 1962 was sentenced to death by hanging.

Ever since World War Two ended the world has been ceaselessly interested in the Nazis, the war, Hitler, and the Holocaust. Now a new book by German philosopher Bettina Stangneth tells the story of Adolf Eichmann once the war ended, and how he remained hidden from intelligence services for 15 years. Bettina lives in Hamburg where she researched and wrote her new book called Eichmann Before Jerusalem: The Unexamined Life of a Mass Murderer.

As soon as the war ended, Eichmann changed his name and fled to the far north of Germany. Then after a few years, he made the move to South America, where he settled in Argentina and was helped by the Red Cross.

According to Bettina, he was well-versed with immigration policies and how to escape capture, since he had been in charge of deporting the Jewish population during the war. When Eichmann realized the Nazis were going to lose the war, he immediately set about preparing fake documentation to prepare for his escape.

Sadly, before the war ended Eichmann persecuted more Jews than ever. Bettina portrays him as a normal, average man who did not think about what he was doing when he sent thousands of Jews to be murdered.

During the years that Eichmann had evaded capture, he had time to consider his actions and plan what he might argue or say during a trial. When the time came, Eichmann positioned himself as a bureaucrat caught up in the Nazi hysteria and maintained that he was simply following orders when it came to the mass execution of Jews.

The trial provided much evidence against Eichmann, but he refused to be condemned as a guilty man. The prosecution provided eye-witnesses, documentation, reports, and testimonies that proved Eichmann was as guilty as any leading Nazi official.

Eichmann even spoke about how he had created the name of the plan to kill the Jewish population, ‘The Final Solution’. Eichmann was proved to be proud of what he had done; in the years after the war, he boasted and sought acknowledgement for his actions. However, when it came to his trial, he denied any wrongdoing.