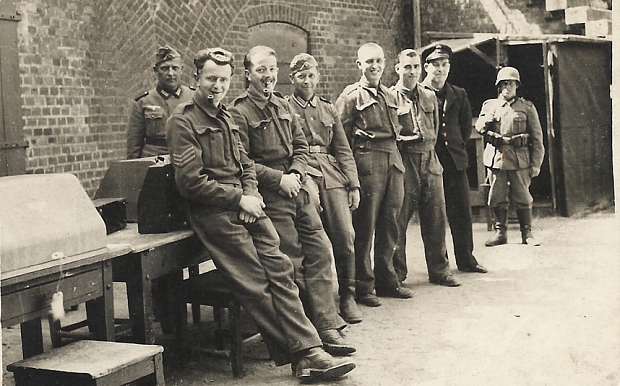 A personal story of friendship and a daring escape during World War Two has been revealed from the letters and paperwork left in a soldier’s suitcase.

In 1942 two British soldiers had been held at a prisoner of war camp in the north of Poland. But Lieutenant Corporal John Antony and Sergeant Frederick Foster had escaped and had to make their way out of German-occupied Europe.

Both in their mid-20s, John and Fred had disguised themselves in suits and both spoke fluent German. With spectacles and paperwork documenting them as advertising executives, they aimed to head across Germany and down to the Swiss border.

Even though John made it over the border, Fred was stopped and unable to get across. Rather than escape to freedom John turned round to go back for his friend he’d come so far with.

It was Fred’s son who came across the suitcase after Fred died in 1990. Before he died Fred never said much about his war time experiences, but the letters in the suitcase told the story he experienced during the war with John.

Fred had been captured in 1940 after fierce fighting on the frontline in Norway. He was taken along with hundreds of other soldiers to Stalag XX-A in Torun, northern Poland. Meanwhile John was captured on a mission in France and was taken to the same camp. Many wanted and tried to escape, so John and Fred came up with their own plan.

They decided that rather than heading north to get away via the sea, they would journey all the way through Germany to Switzerland. They forged their documents and got clothes from local Polish people who worked at the camp. John knew German and every day for a year and a half taught Fred everything he knew, but Fred’s accent gave him away so they decided he would be Hungarian in which case he could disguise his accent.

They got out of the camp and to the local train station where they got a train to Berlin. Their documents were checked and they were never questioned. They got another train south to Munich, and then finally to the nearby Swiss border town of Lindau.

John made his way over the border first and got through with no problem. Meanwhile when Fred made his way through, German officers thought something about his paperwork was suspicious. They had previously made a pact that if one got through that they should keep going no matter what. But John couldn’t leave his friend behind, and he turned back to help Fred.

Both men were arrested and handed over to the Gestapo for questioning. They were tortured and starved and eventually sent back to the camp near Torun. John kept trying to escape making a total of eight more attempts, The Telegraph reports.

In 1945 John was made to walk the German death march across Germany with thousands of other soldiers in the middle of winter. He died along the way when the Nazis made the prisoners wash in the freezing waters of the River Elbe. Since he already had dysentery and was starving, and just skin and bones the river waters finished him off. Fred was also imprisoned but survived and returned to the UK after the war.

Ever since John’s family had tried to locate his war grave. But it wasn’t until Fred’s son, Steve, found the suitcase and discovered the story, that he took up the mission to find John’s grave. After years of searching and research, Steve discovered that John had been buried in a local cemetery, and then his remains were transferred to the Becklingen war cemetery by the British Army but remained unnamed.

Now 70 years later Steve has presented the evidence to the British Army and John’s gravestone will be updated to include John’s name and details. Steve says it was in awe of the story of his father and John, and for what John did for his father. He says that finding his grave is the least he could do.