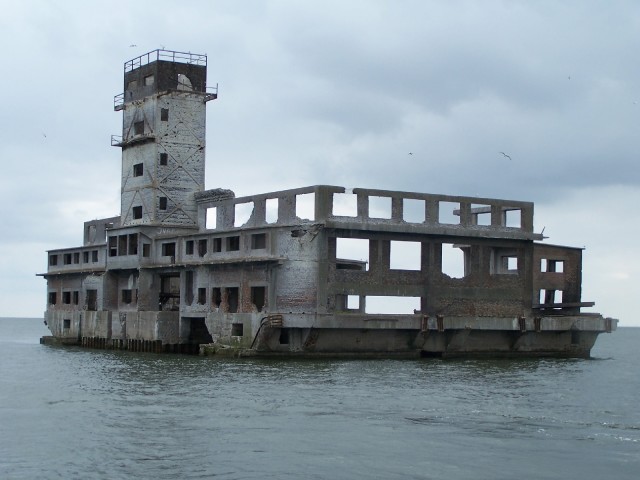 The Second World War ended more than 70 years ago, but remnants of the conflict are still visible throughout Europe and the world beyond. Many new military structures were built for a variety of purposes, and can be found today in various states of disrepair.

One such structure – The Kriegsmarine Submarine Arms Research Centre – can be found off the coast of Poland, in the Bay of Puck. This shallow body of water is a branch of the Bay of Gdańsk, in the southern area of the Baltic Sea. It lies just off the coast of Gdańsk Pomerania, and only the Hel Peninsula stands between it and the open ocean.

The invasion of Poland in 1939 marked the beginning off the Second World War, and saw German forces sweeping into the country on the 1st of September that year. Less than a month later, on the 17th of September, the Soviet army also invaded Poland.

A government in exile was established in Britain, along with a Polish secret service and various other elements of the state, but the country itself was now under the control of Nazi Germany and Soviet Russia.

In other occupied nations, such as France, the Nazis set up collaborationist governments, but this was not the case in Poland. Following the invasion in September 1939, they put in place an entirely German administrative body called the Generalgouvernement.

The German occupiers were far from unopposed, however, and the people of Poland were not to be underestimated. At home, defiant patriots established The Polish Underground State, one of the largest resistance groups to exist during the Second World War. They caused the deaths of more than 100,000 Axis soldiers, supplied vital information and intelligence to Allied forces and had a membership of more than 400,000 people.

On top of this, Polish forces played many often essential roles within the armies of Germany’s enemies elsewhere in Europe. From flying during the Battle of Britain to fighting alongside the Red Army on the Eastern Front, Polish nationals were determined to do all the could to liberate their homeland.

Back in Poland, however, German officials made use of their newly conquered terrain, and built a number of bases and military structures throughout the country. The Kriegsmarine Submarine Arms Research Center is one such building, and it still stands to this day. The Germans built it as a base for testing torpedoes, which would be fired at targets at Jastarnia and Jurata, on the Hel Peninsula.

It consisted of a Torpedo Launcher in Babie Doły and two minor buildings placed across the Gulf, in the vicinity of Jastarnia, between which a torpedo scavenging net was spread. The abandoned station has since been nicknamed ‘Torpedownia’.

Once the war ended and Poland came under full Soviet authority, the military continued to use the building and the area around it to train military divers and practice underwater maneuvers.

As the years passed the base was eventually abandoned, and has been left to rot ever since. Although the remains are now unused, swimmers and divers will still go out to investigate the ruins, while others travel to visit it by boat.

The interior of the main building is dilapidated but relatively intact. Bars of rusty metal protrude from the walls and visitors must be wary of the danger they pose. Much of the lower regions are crusted with shells and marine fauna, and the submerged areas are home to variety of sea life.

These striking photographs and video footage offer us a closer look at this remarkable structure, with images from both the air and the sea. These pictures provide us with an insight into a relic of Polish history, and into the Second World War in general. 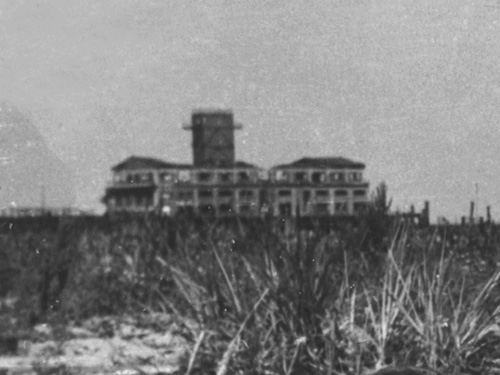 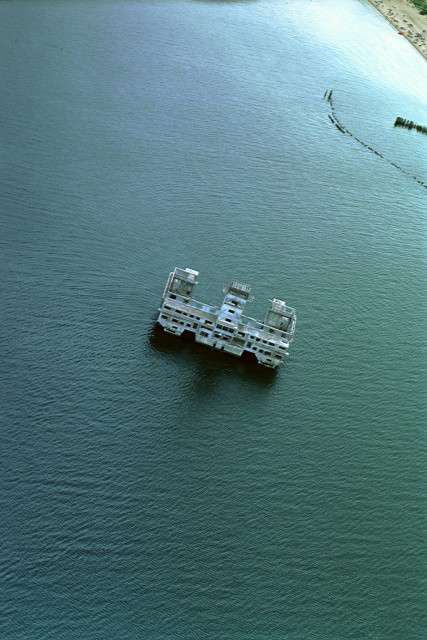 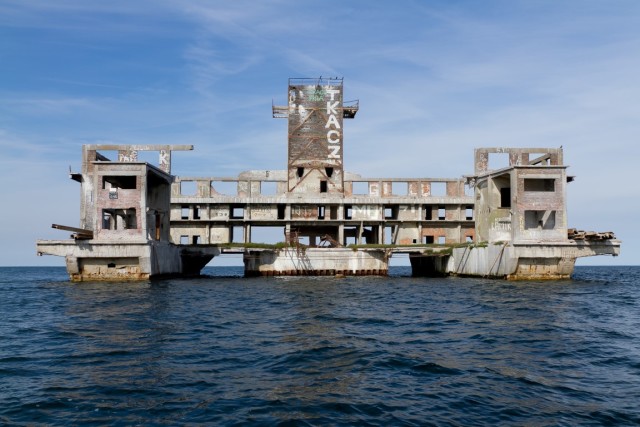 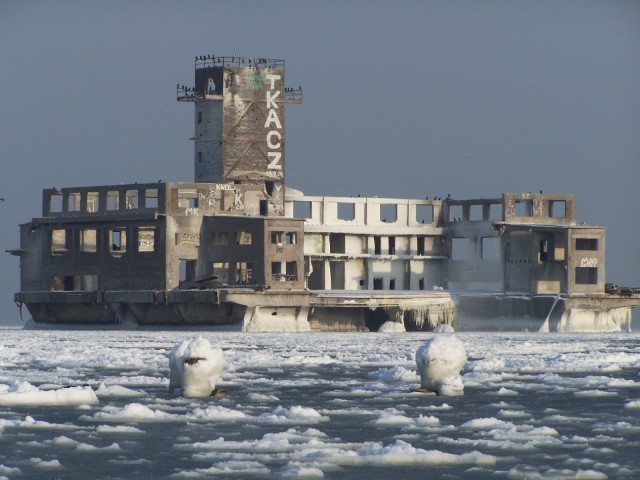 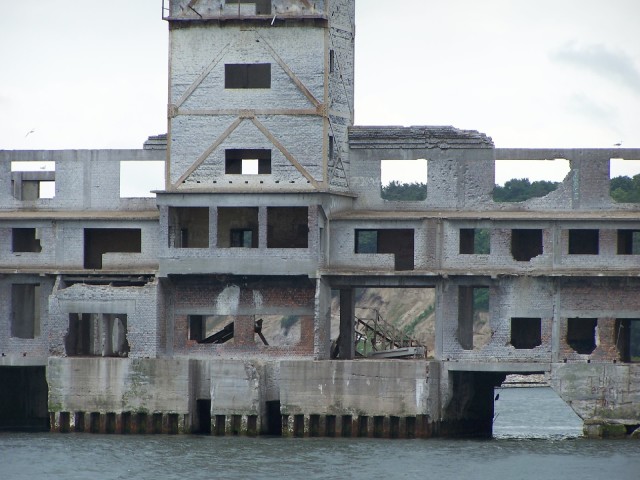 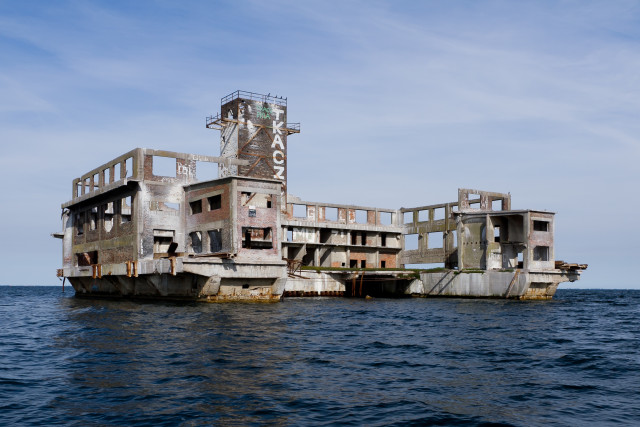 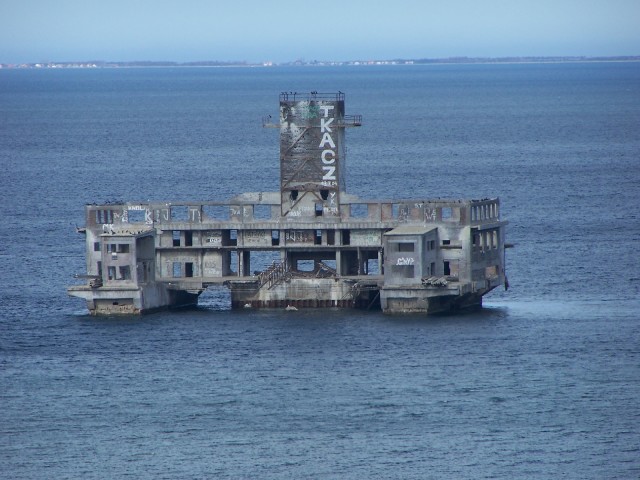 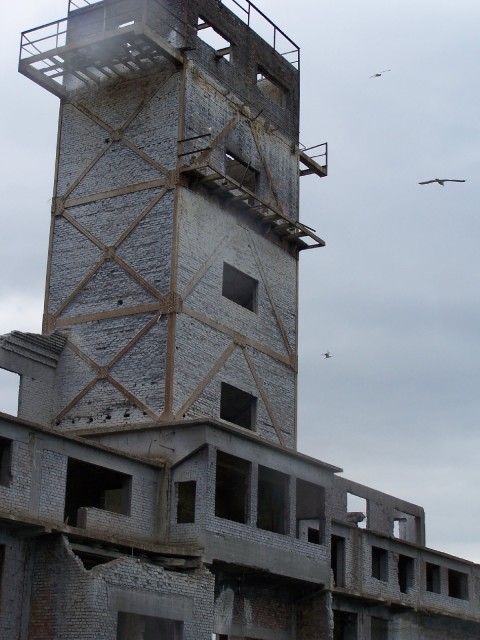 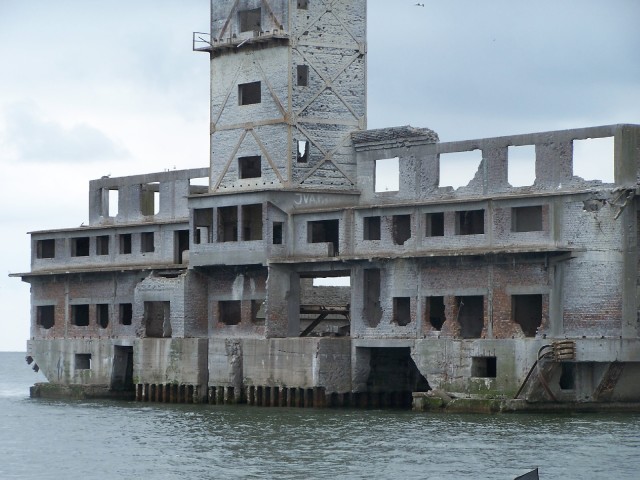 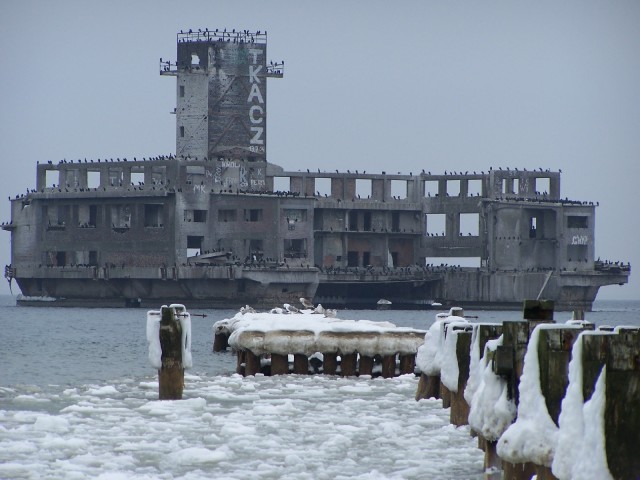