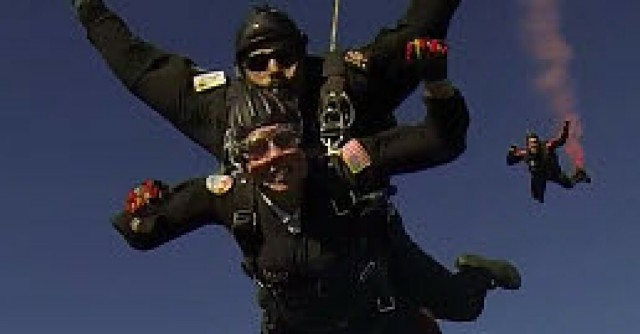 A 90-year old World War Two veteran nurse has skydived as part of her birthday celebrations.

Jeannette Kirkpatrick is a mother of three children and a grandmother of six; to celebrate her 90th birthday she decided to jump out of an airplane at 14,000 feet.

Jeannette said that she had survived 90 years of living, so believed she could handle doing a skydive. She commented that she had a lot of friends watching, so if she was to die she’d be happy doing the skydive anyway.

The skydive was organized by the All Veteran Parachute Team and took place at Raeford Airport. Before Jeannette took to the skies she undertook a pre-jump briefing.  She had previously seen all of her children make the skydive jump in the past.

Jeannette’s grandchildren helped her to look good, including putting make-up on before the jump, so that she would be ready for photographers and waiting TV crews.

Jeannette first served with the US Cadet Nurse Corps toward the end of World War Two when she was just 18-years old. Rather than being deployed to Europe, she remained in the U.S. and was tasked with providing medical treatment to the returning troops.

Jeannette recalls how they didn’t have any kind of anaesthetic except for ether gas, and that they didn’t even have penicillin. She even recalls that instruments they were using would get washed and used over and over again because there were so many patients and so little equipment.

Mike Elliot, who is the president of the All Veteran Parachute Group and has been with the US Army for more than 26 years, joined Jeannette for the jump.

The pair took off at 5:00pm and they jumped out, releasing a red, white, and blue parachute, when the plane reached 14,000 feet, the abc11 reports.

When the pair came into the landing area Jeannette said that she didn’t think she put her legs in the right position. But she loved the experience, and when asked if she would like to do it again she said that she might just do that.

Jeannette’s grandchildren said they would have to come up with something really special for her 100th birthday in 10 years’ time.