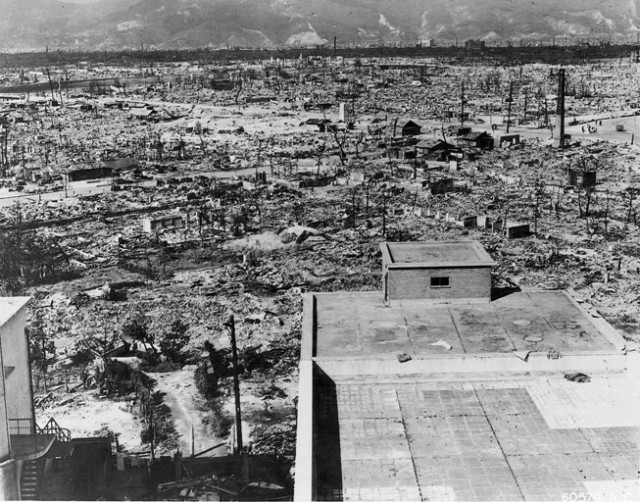 As Japan commemorates 70 years since the atomic bombs were dropped on Hiroshima and Nagasaki the world is remembering the aftermath of those bombs.

When the bomb was dropped on Hiroshima it instantly killed 140,000 people and a huge atomic mushroom cloud formed over the city. It was the first time that an atomic bomb was used in a military attack.

Before the attack took place attempts had been made by the US to seek Japanese surrender, but this had been rejected by the Japanese leadership. It took the two atomic bombs to end World War Two and get the Japanese to agree to unconditional surrender.

The mission was kept top secret and even only three of the twelve crew members aboard the Enola Gay, the plane that dropped the first bomb on Hiroshima, knew about it. Hiroshima was a military centre for the Japanese and was chosen in order to destroy the country’s ability to continue fighting.

It was another three days later when the second bomb was dropped by the B-29 Bockscar on Nagasaki. Its original target was the city of Kokura, but bad weather conditions meant that the mission was diverted to Nagasaki instead to destroy Japan’s biggest seaport.

Even prior to Germany’s surrender at the beginning of May in 1945 the Allies were planning the final push of the Pacific theatre of war into mainland Japan, known as Operation Downfall. The Allies had gradually pushed north, island-hopping up through the Pacific and reached as far as they could before the mainland. However Japan still had control over Korea, Manchuria and much of Indochina.

Operation Downfall was planned to begin in October of 1945. It was going to be deployed in two parts. The first plan was a land invasion on Japan’s southern island of Kyūshū. The next part would begin in March of the following year which would take Kantō Plain, near Tokyo.

However this plan of the southern invasion, followed by a northern attack was something the Japanese could have predicted – it wasn’t a surprise or unusual approach. The Japanese began to tailor their defence plan to combat Operation Downfall and decided that they would put all efforts and troops into the southern attack and would direct all resources there. More than two million troops were redeployed to Japan’s south, supported by civilian reservists of almost 30 million people.

It was estimated that the casualty rate was going to be very high and the Japanese believed they might lose around 20 million people in the conflict. Meanwhile the US believed its initial assault would cause up to 220,000 casualties of US troops, The Telegraph reports.

The build up of Japanese troops frightened the US and it was General of the US Army, George Marshall who began to investigate a weapon could decrease the risk and cost of the lives of US troops.