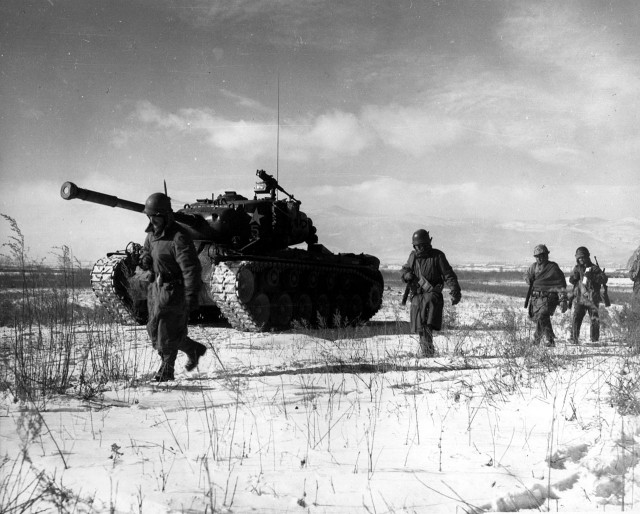 It’s been 60 years this year since the Korean Armistice Agreement was signed, bringing the Korean War to an end, and dividing the country into the communist North and democratic South.

To commemorate the anniversary, Korean War veterans from the 8th Ranger Company have come together for a reunion in Carlyle, Pennsylvania.

E.C. Rivera was one of those veterans at the commemoration. During the Korean War, he became trapped with his company by enemy troops. He managed to climb a hill and call in four US tanks to come in and help them. Even though Rivera climbed that hill to save his company, he was never honoured for his actions.

The veterans say that they formed lifelong friendships during the conflict, but that when they returned home, they weren’t given a welcome or acknowledgement for their service.

Rivera says that no one in America cared about the Korean War and that Americans didn’t understand the sacrifice the troops had made for their country.

Major Dave Teich, who is now 87 years old, said that he had to go against his superior’s orders to come to Rivera’s help. They were just a few miles from the current day border that divide the two countries when Dave heard Rivera’s radio call for help. Dave, who was a lieutenant at the time, said that he asked his superior if they could move their tanks to rescue Rivera’s company. His captain declined and said that they should fight their battle.

However, Dave couldn’t ignore the call for help and felt he had a moral obligation to do the right thing. He volunteered to take four of his squadron’s tanks to rescue the trapped company. Many were killed on both sides as the Chinese advanced, but the tanks made their way to Rivera and his men, and they all clambered aboard to be taken south, away from the frontline.

To this day the company that Dave rescued get in touch with him to show their thanks for saving their lives. Of the 117 soldiers in the original company, there are only about 15 still living. Six of them came together to commemorate the anniversary of the peace agreement.

“There is no such thing as ‘the greatest generation,’ ” Black said. “A man who died on a hilltop in Korea gave just as much for his country as did a man who died at Omaha Beach. History isn’t fair. The big wars, the big battles get the attention. But the blood is the same.”