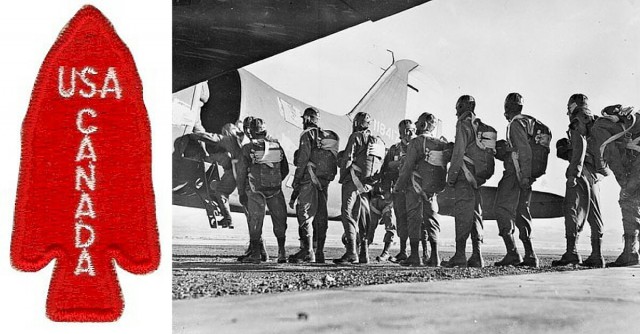 In March 1942, eccentric British inventor Geoffrey Pyke came up with the idea of forming a special forces unit to carry out operations against the German army in the mountains of Norway. Pyke sent details of his scheme to the Chief of Combined Operations, Lord Louis Mountbatten who was persuaded that the plan was a good one.

At a subsequent meeting of the British High Command, it was decided to offer Pyke’s proposal to the United States and an elite unit called the 1st Special Service Force was formed under the command of Lieutenant Colonel Robert Frederick.  The original intention was to form the unit using troops from America, Canada, and Norway who were used to working outdoors.  There was a lack of suitable Norwegian recruits, however, and the unit eventually consisted of roughly equal numbers of Americans and Canadians.

The 2300 men selected were to undergo intensive training in the skills they would need to operate in winter conditions. They all became expert skiers and parachutists and were taught advanced hand-to-hand fighting techniques.  America’s first elite fighting force – later to be known as The Devil’s Brigade – was born.

Geoffrey Pyke’s original plan codenamed ‘Project Plough’ was dropped because of a lack of the aircraft needed to drop the men over Norway, and in November 1943 the 1st Special Service Force was sent to Naples to fight alongside the US 36th Infantry Division.

On December 3, 1943 the Devil’s brigade began an operation to attack a heavily defended German position on Monte La Difensa, part of the Camino hill mass. The Nazis had so far resisted American and British assaults, but the Special Service Force had been specially trained for winter fighting in mountainous territory, the Calgary Herald reports.

Bernard Cooper aged 97 from Calgary was one of 40 surviving members of the Devil’s Brigade who received the US Congressional Gold medal in February 2015. Bernard can still vividly recall the battle of Monte La Difensa, saying “When I first went into that battle I felt my stomach tighten up just like a knot, and I think my mind was kind of blank, too, because when the guys were killed alongside of you, I didn’t feel a thing.”

The Special Force scaled the mountain and overran the German fortifications, but at a heavy price – they suffered a 77% casualty rate.  The battle was later the subject of the 1968 film “The Devil’s Brigade.”