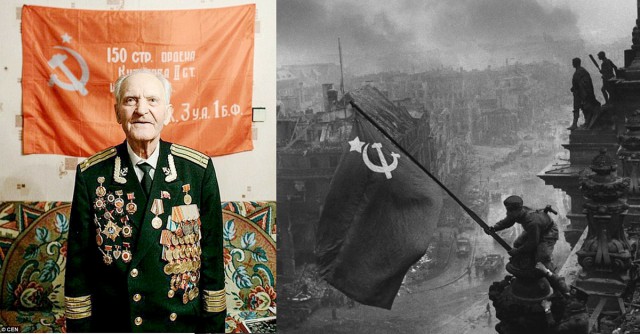 The last member of the Soviet Red Army division that lived in St. Petersburg and stormed the German Reichstag in Berlin at the end of World War Two has died aged 93. In his honor, the Russian Parliament flag was replaced with the Red Flag, which was raised by the Russian veteran’s regiment.

Nikolay Belyaev was the last survivor that lived in St. Petersburg who took part in storming the German Reichstag, which was undertaken by troops of the Soviet Third Shock Army. This was a division much feared by the enemy, and it lead the charge into Berlin in the closing days of the war.

Nikolay served with the 756th Regiment, which headed for the German Reichstag. When they reached the famous building, they removed the Nazi swastika flag that hung over the Nazi Parliament’s rooftop and replaced it with the Soviet’s own Red Flag. The date was the first of May, 1945.

Reports of Nikolay’s death swarmed Russian media, stating that Nikolay died in peace in the city of St. Petersburg. His friends said that Nikolay was a very active man right up until he died; a biography of his war experiences is due to be published next year.

After serving with the Red Army in World War Two, Nikolay transferred to the Soviet Navy and joined its Pacific fleet. When his tour of duty ended, Nikolay returned to his hometown and worked in a factory until he retired many years later.

The German Reichstag opened in 1894 and remains the historical center for Germany’s Government. The Nazis took over the Reichstag in 1933, but just as they did, a fire caused all political parties to move out, so they never actually used the building as their main headquarters. It was, however, seen as a symbolic center for the Third Reich and an appropriate place for the Allies and Red Army to conquer the Nazi party.

Nikolay’s regiment began its invasion of the Reichstag in the early morning of the last day of April in 1945. Stalin declared that it was in the hands of the Soviet Red Army the next day so the USSR’s May Day parades could celebrate the victory across the country.

Even though Stalin had made the announcement, the actual fighting to take the building continued all day on the 30th of April and on through to the early morning of the 1st of May. Even when the troops erected the Red Flag over the building, there was still fighting going on inside.

Around 200, German soldiers fighting for a long dead Nazi Empire died during the battle, and hundreds were injured.

At least ten more Red Army veterans who took part in that legendary attack, are still alive. As for now, the following are known: