When sitting down to watch war movies, most audiences expect that the accounts are as true to what actually happened as possible, especially since they are based on a real, historical event. However, many of the war portrayals aren’t as accurate as you’d expect. Movie directors have to cut out pieces of story as well as embellish what really happened to make it more exciting or enticing for audiences.

Here are some of those movies which haven’t portrayed the events of war as accurately as they could have. Set at the Eastern Front line during World War Two, Enemy at the Gates focuses on telling the story of Vasily Zaytsev, a famous Soviet sniper who fought at the Battle of Stalingrad. Its most inaccurate scenes include showing the Red Army soldiers heading into battle with just one weapon between two men. While records show the Red Army suffered with a lack of arms, there is no evidence to suggest that any soldier was sent into combat without a weapon.

The movie also suggests that due to Vasily’s actions he actually single-handedly changed the course of the battle. However over a million men fought for both the Nazis and the Red Army. Then the key scene when Vasily engages in a direct one-on-one sniper fight with his Nazi rival may not have even occurred.

Vasily claimed in his memoirs that the fight happened, but no other records or reports of the fight exist.

Awarding-winning movie, Jarhead, was a psychological thriller telling the story of US soldiers who took part in the first Gulf War in the early 1990s. Veterans say that the movie exaggerates what actually happened and that scenes such as soldiers firing wildly into the air around a bonfire, being abandoned on the battlefield and the accidental killing of a soldier during an exercise would have been unlikely.

Also physical and mental abuse portrayed in the movie has not been shown accurately. The official Marine Corps Public Affairs spokesperson has said the movie is inaccurate. 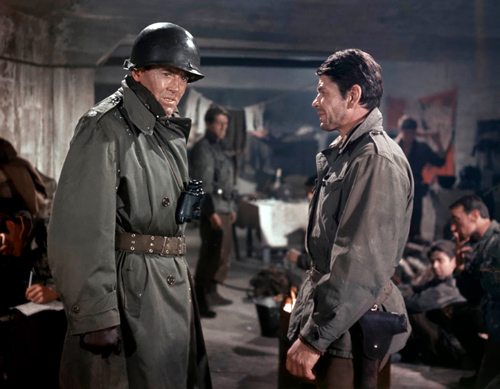 The famous movie used American M47 Patton tanks on the German side to replace the Nazi King Tiger tank. The weather conditions were also inaccurate as the battle was famously hindered by atrocious winter weather conditions, yet many battle scenes are completely free of snow and rain. They also occur on flat terrain, which again was not the case in the Ardennes forest.

The film portrays the US tanks running the German tanks down so that they ran out of fuel, but this didn’t happen and the German tanks would have run out regardless. Plus all of the American jeeps in the movie were post-war designs.

More recently, Red Tails tried to be more upbeat than the standard war movie and tells the story of the first US military African American fighter squadron, who became known as the Tuskegee Airmen.

Some of the points made in the film weren’t true, such as the assumption that they didn’t suffer any losses under enemy fire. However, the truth is that over 25 of their bombers were shot down throughout World War Two.

One of the movie’s main characters was portrayed as one of the best fighter pilots in combat during the war. However, records show that the squadron didn’t have any flying aces.

U-571 is a classic American movie that portrays the country as the sole victor during World War Two and downplays the role of the other Allied forces.

The movie portrays the capture of the first Nazi Enigma machine that the Nazis were using to communicate coded messages and send military plans and instructions to its forces. It shows the operation as a US-led mission, but in reality the mission was undertaken by the British Royal Navy.

In fact, the real-life mission happened in 1941 around seven months before America even joined the war.
US forces did capture a later Enigma machine, but that occurred later in 1944.

When the movie was released in 2000, the British Prime Minister at the time, Tony Blair, denounced it as an insult to the British Royal Navy.

The German red Fokker Dr 1s in the movie, Flyboys, was used as standard issue of the Luftwaffe. However, in reality the aircraft was not commonly used. US Air Force pilots are also shown flying Nieuport 17s, but this was decommissioned long before the Germans were flying the Fokker.

The movie’s producers said that the decision had been made so that audiences would be able to tell the two aircraft apart. It emerged that one of the military advisers on the movie turned out to be a criminal and was later charged with fraud, including making up his military service record. This movie depicts the story of the Native American Navajo Indians, who were engaged during World War Two so that coded messages could be sent in the Navajo language.

One of the main story lines in the movie suggests that the Navajo Indians had bodyguards who were told to kill them if they got into enemy hands but this was incorrect.

Ground battle scenes were also not accurately depicted since they occurred at around 10 feet apart, which wasn’t usually the case, plus there was no cover fire or concealing when the troops advanced. Although a modern war time epic, the movie has many inaccuracies.

One specific scene shows a soldier firing at a Japanese fighter plane which is flying between two battleships, but this would have been impossible since he would have been firing at his own vessel. Plus in some scenes one canister of ammunition is being used, whilst in others there are two.

A Vietnam War movie, The Green Berets, features John Wayne and was made to try to convince the American people that the Vietnam War was a worthy war.

However, John Wayne sometimes held his rifle the wrong way up, was aging and was overweight. In reality there is no way he would have been allowed out in the field in the real army.

The native jungle terrain was replaced with pine trees and the earth was a red clay, which is not from Vietnam.

It was resoundingly panned by critics who said that it made a mockery of the real Vietnam War.

Set during the second Iraq War, The Hurt Locker follows a bomb disposal squad and the drama is over the top compared to reality.

One scene where one of the men is said to have disposed of 870 bombs over his career is said to be unrealistic. The same character was also panned for risking his men’s lives by not following procedure. The squad often operate without support which again is unlikely and the relationship between the men and their officer shows disrespect, which wouldn’t be the case in a real-life situation.