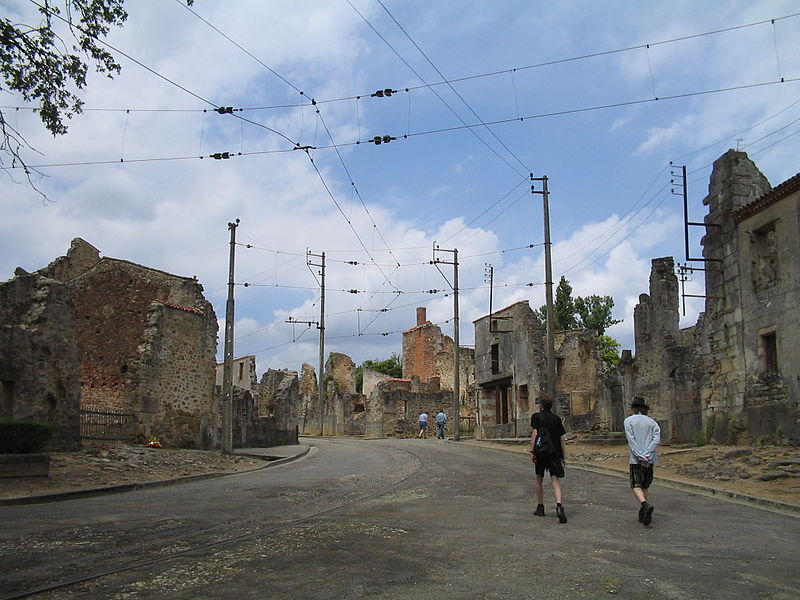 By Richard Brook. On 10 June, 1944, men of the 2nd Waffen-SS “Das Reich” Panzer Division came to Oradour-sur-Glane. Located some 460 km south and east of Normandy, this small community had existed for 1000 years. The soldiers stayed for only a few hours. When they left, the town and all its inhabitants were dead. On that fateful day, members of the Waffen-SS Battallian “Das Reich” gathered the entire community together in the town square. The men were taken to garages and barns while the women and children were herded into a church. From inside the church, they could hear the sound of the machine guns and the screams as the men of the town were all shot. Then, the SS turned their attention to the church. They set it aflame; and the women and children inside the church were murdered as well.

A few weeks later, the SS “Das Reich” Battalion would find itself nearly cut-off and surrounded in the “Failaise Pocket”. In a pincer movement, the British, Canadians and Poles tried to close the pocket from the north while the US Army tried to close the pocket from the south. The heaviest fighting occurred around the town of Falaise as the Germans realized that it was the only way out. In the Battle, the “Das Reich” Battalion took tremendous casualties. They barely escaped from the pocket with one quarter of their men. Many of the perpetrators of the massacre at Oradour would die in the Falaise Pocket. But the survivors would live to fight again during the Battle of the Bulge. 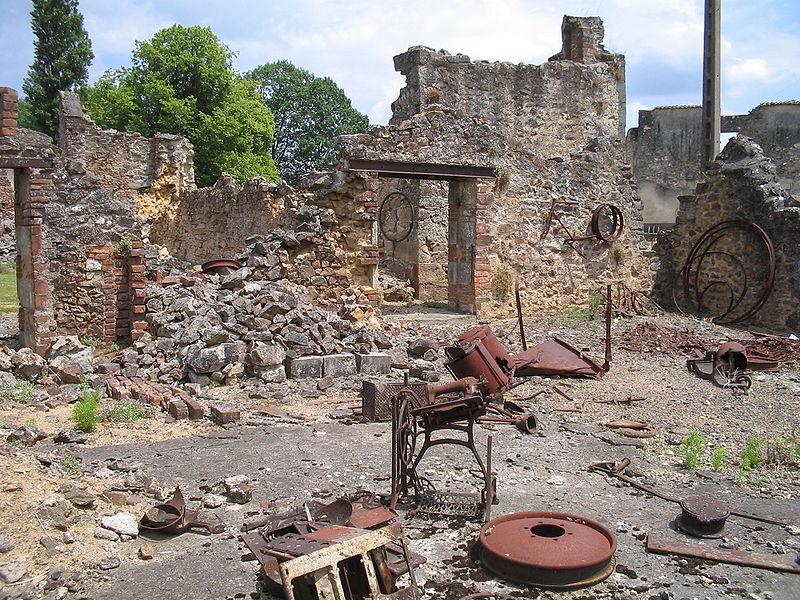 But on that day in June, just four days after D-Day, the SS would murder some 642 men, women and children. It was a war crime, like so many others during the war, that would never be fully examined or explained. And in a final insult to the dead, most of the perpetrators who survived the war would never be properly punished.

They never rebuilt Oradour. Its ruins stand as a memorial. A memorial not just to those murdered there, but also a memorial to the hundreds of towns and communities that suffered a similar fate across Europe, in Poland, in Czechoslovakia and in Russia. A fate also shared with towns and communities on the other side of the world in China and in Burma. 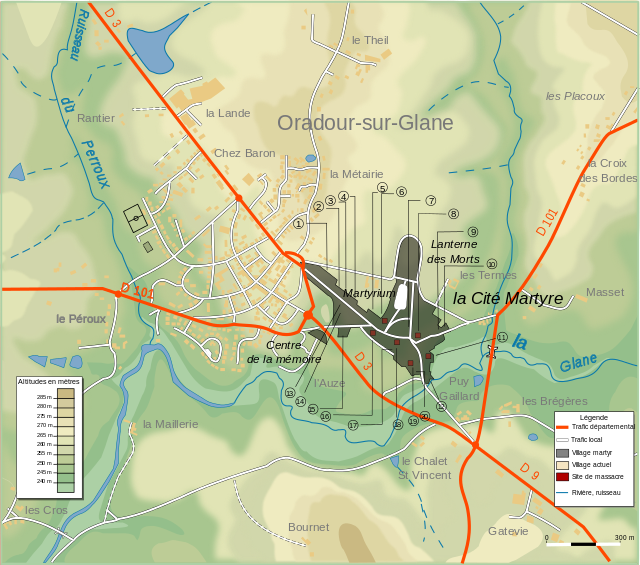 Oradour was in the part of France that was occupied by the Nazis. By June of 1944, the French resistance, often referred to as the “Maquis”, with assistance from the British SOE and the American OSS, were doing their best to disrupt German communication and supply lines throughout France. The German military commanders, especially those who had seen duty on the Eastern Front, had seen it all before. In a tit for tat series of escalations, the war behind the lines became just as brutal as the war on the front lines. Thousands of Germans soldiers, police battalions and even prison battalions were engaged in a deadly fight with thousands upon thousands of partisans. Neither side was interested in taking prisoners. Neither side gave any quarter.

It was this attitude that the 2nd Waffen-SS Panzer Division “Das Reich” brought with it to Normandy as it was redepoyed from the Eastern Front to the French town of Montauban in January of 1944. Under the command of SS-Major General Heinz Lammerding, “Das Reich” had been involved in a number of anti-partisan raids in Eastern Europe. Many thousands of civilians had been murdered for perceived partisan activities or even “sympathies”. Dozens of towns had been put to the torch. When faced with an increasing insurgency in France, Lammerding knew exactly what to do. 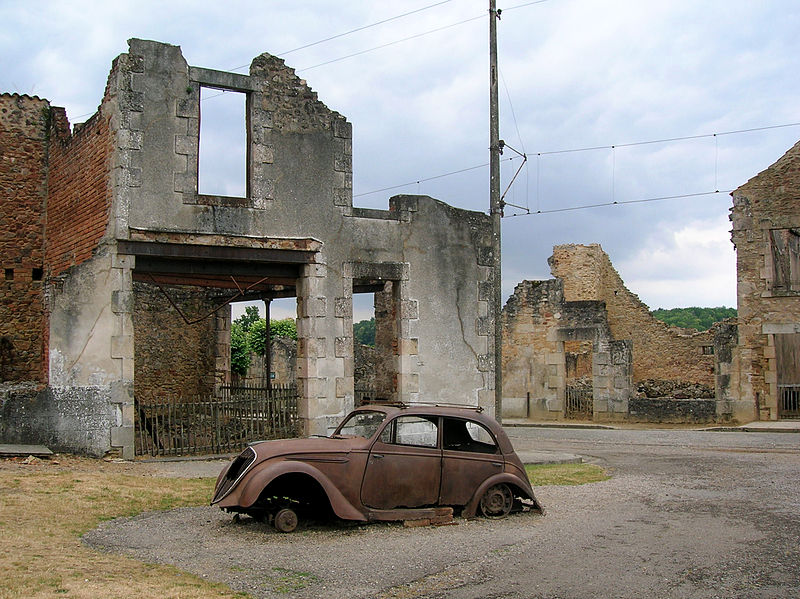 The with D-Day landings, the Maquis put their efforts into high gear. The Germans brutally responded. On 09 June, 1944, Lammerding and his men decided to show the Maquis who was in charge. They entered the town of Tulle, near Limoges and hung 99 men. Every man they could find, died that day.

The next day, on 10 June, 1944, members of a subordinate unit of the 2nd SS Panzer Division came to Oradour-Sur-Glane. Under the command of SS Major Adolf Diekman, the 3rd Company of the 4th SS-Panzergrenadier Regiment, surrounded the town. Within a few hours, 197 men were shot and/or burned alive in garages and barns while 445 women and children were then burned in a church.

The town was then looted and burned to the ground. By 8 pm, the Germans withdrew leaving nothing but a smoking ruin. Only 7 villagers survived the massacre, six men and one woman. Another 15 escaped during the process of rounding up the inhabitants. 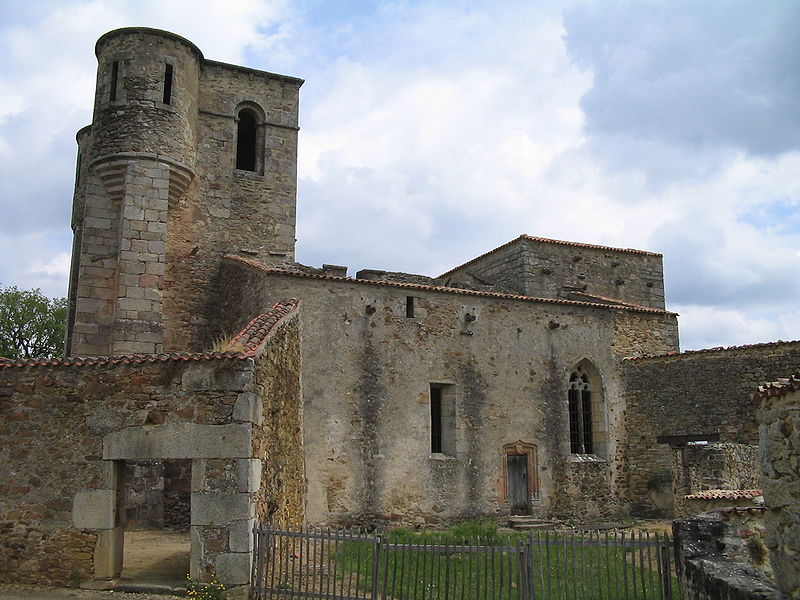 In the aftermath of the attack, the Vichy government protested to the German Army. The excuse they received back from German Army HQ was that the SS attacked because they themselves had come under attack from inside the town. The Germans tried to tell the French that all the deaths in the church were due to a Maquis ammunition dump that had exploded. But the Vichy weren’t buying the explanation.

After the war, the massacre in Oradour received much attention. In 1946, the De Gaulle government made the town a national memorial and mandated that it should be maintained in its current condition. It fit De Gaulle’s narrative that the town was destroyed in retaliation for partisan activities. He promoted this idea as much as possible to deflect from the collaborating actions of the Vichy government.

The French raised Oradour at the Nuremberg War Crimes Trials. Why Oradour was chosen by the officers of the “Das Reich” Division has never been resolved or explained. Few Germans would ever be prosecuted for the murders. Diekmann would die in the fighting at the Falaise Pocket. The Germans refused to extradite Lammerding back to France so that he could stand trial even though he had been sentenced to death in absentia by the French court in 1953. In 1961, the Frankfurt prosecutor’s office opened a file against Lammerding but refused to proceed on the grounds of insufficient evidence. Lammerding died in Germany in 1971.

In 1953, a French military court prosecuted 21 former members of the 2nd SS “Das Reich” Division for the crimes they committed in Oradour and Tulle. Two were given the death sentence and 18 more received prison terms of between 5 and 20 years. The French were able to get ahold of these men because they were ethnic Germans from the Alsace, a region that was turned over to France at the end of the war. But within 5 years of the convictions, all were set free.

In 1981 the East Germans arrested an SS Sergeant named Heinz Barth, a platoon commander whose soldiers were among those that shot the men in Oradour. An East German court sentenced Barth to life in prison. He was released in 1997. Barth would live another 10 years and only die in 2007 at the age of 86.

You can still visit Oradour-sur-Glane and walk down its deserted streets. Like Lidice in the Czech Republic, the destroyed remnants of the town and its 642 murdered inhabitants serve as one of many reminders of German brutality.

You can see more of Richard’s excellent work on his website www.richardmbrook.com