The North Vietnamese had launched their final offensive in March 1975 and the South Vietnamese forces had fallen back before their rapid advance, losing Quang Tri, Hue, Da Nang, Qui Nhon, Tuy Hoa, Nha Trang, and Xuan Loc in quick succession. With the North Vietnamese attacking the outskirts of Saigon, U.S. Ambassador Graham Martin ordered the commencement of Frequent Wind.

In 19 hours, 81 helicopters carried more than 1,000 Americans and almost 6,000 Vietnamese to aircraft carriers offshore. Cpl. Charles McMahon, Jr. and Lance Cpl. Darwin Judge, USMC, were the last U.S. military personnel killed in action in Vietnam, when shrapnel from a North Vietnamese rocket struck them as they were guarding Tan Son Nhut Airbase during the evacuation. At 7:53 a.m. on April 30, the last helicopter lifted off the rook of the embassy and headed out to sea. Later that morning, North Vietnamese tanks crashed through the gates of the Presidential Palace. North Vietnamese Col. Bui Tin accepted the surrender from Gen. Duong Van Minh, who had taken over from Tran Van Huong (who only spent one day in power after President Nguyen Van Thieu fled). The Vietnam War was over. 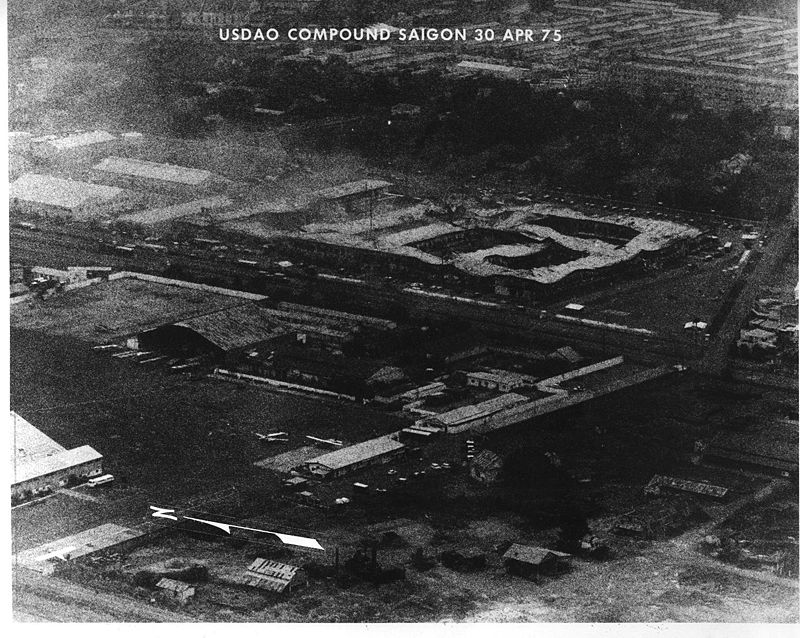 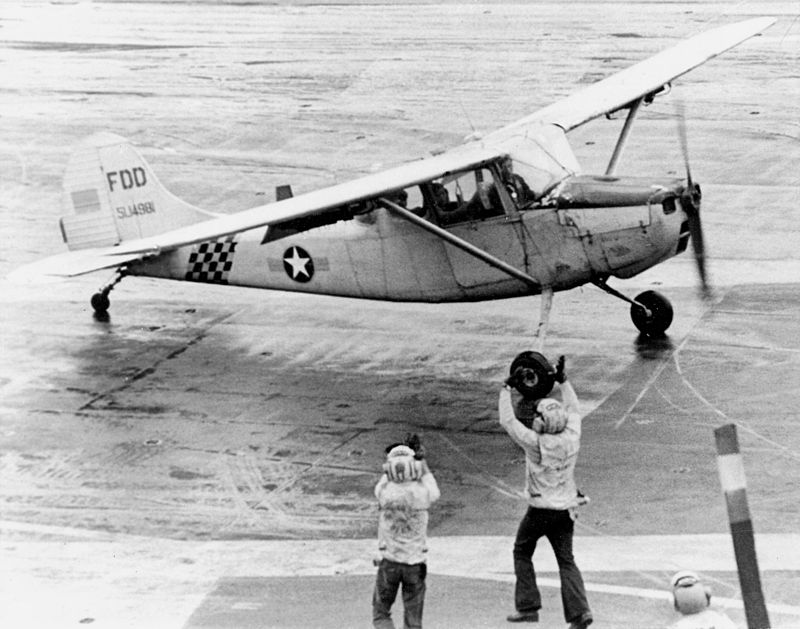 A VNAF Cessna O-1E (s/n SU4981) after that landing on the U.S. Navy aircraft carrier USS Midway (CV-41) on 30 April 1975 during operation “Frequent Wind”, the evacuation of South Vietnam. The plane was piloted by South Vietnamese Air Force Major Buang and carried his wife and five children to safety. Three crewmen are moving toward the plane to assist, two of the deck crews are seen clapping their hands in joy. The aircraft is today on display at the National Museum of Naval Aviation in Pensacola, Florida (USA). 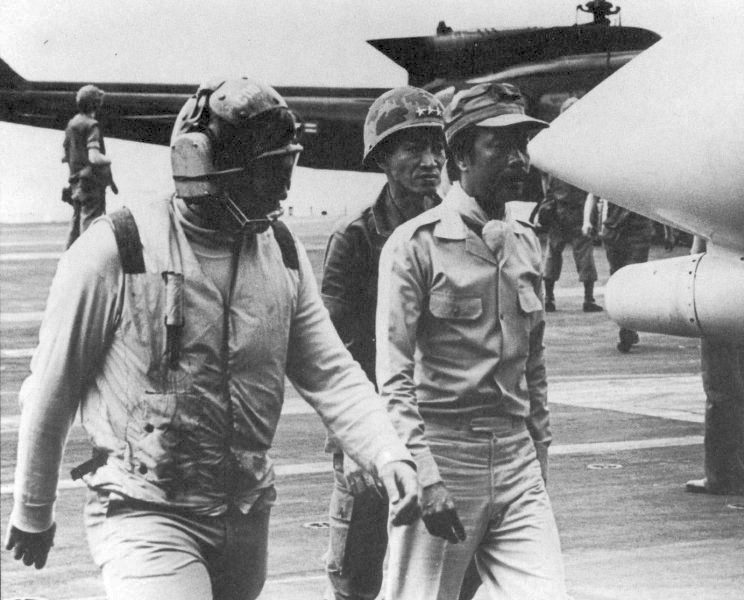 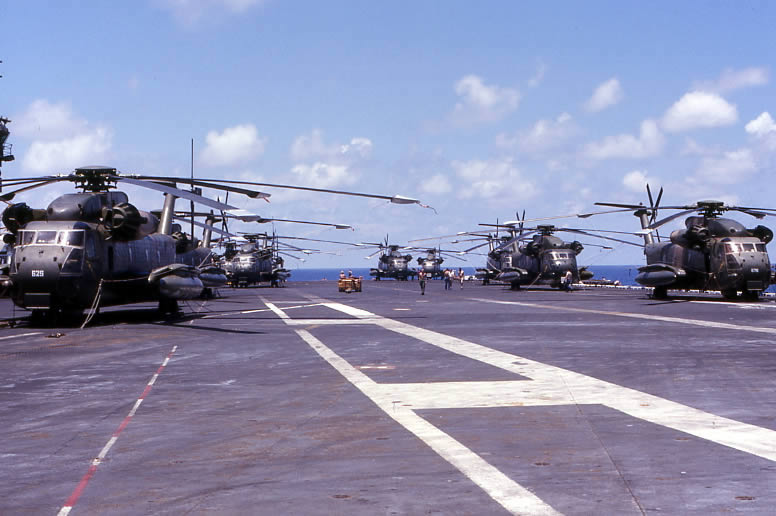 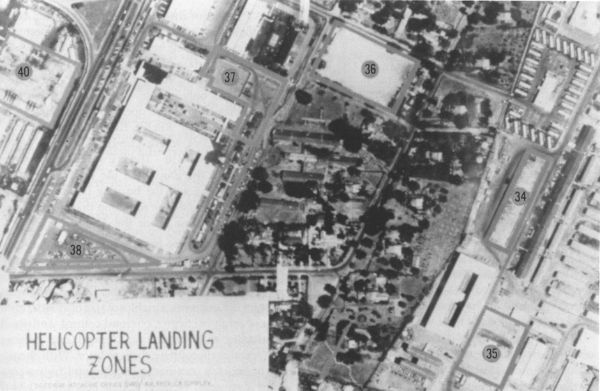 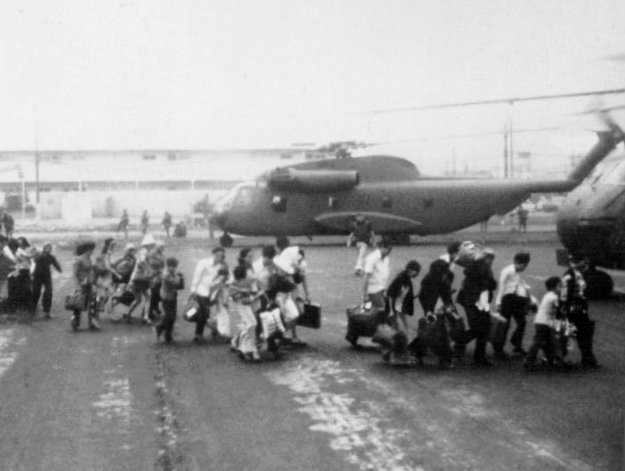 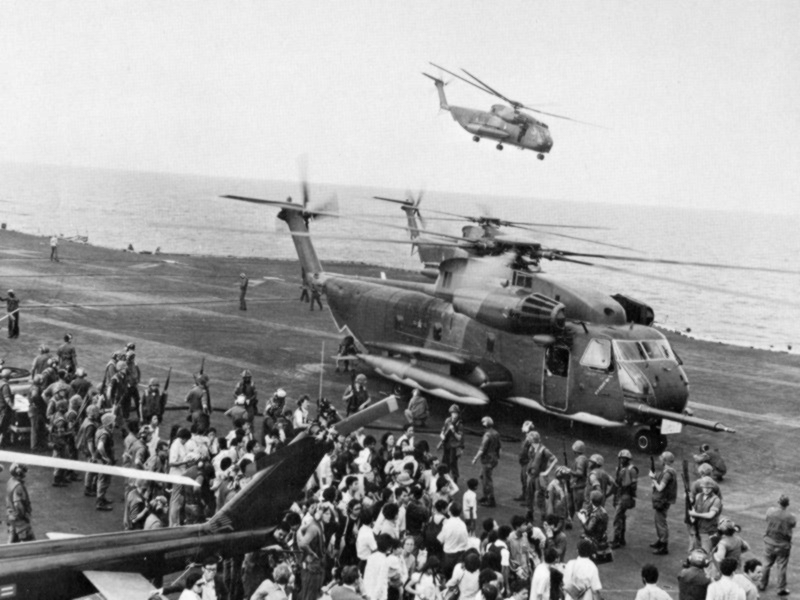 Evacuees from the DAO Compound are offloaded onto the U.S. Navy aircraft carrier USS Midway (CVA-41) during the evacuation of South Vietnam (“Operation Frequent Wind”), in April 1975. 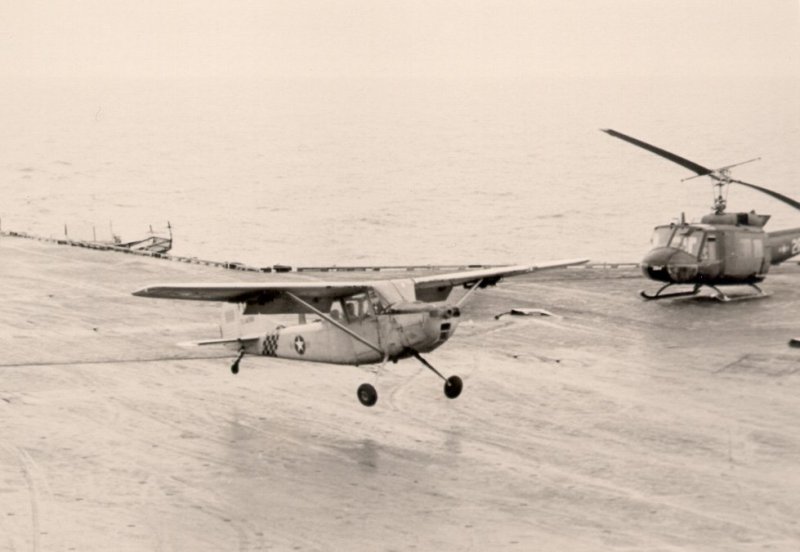 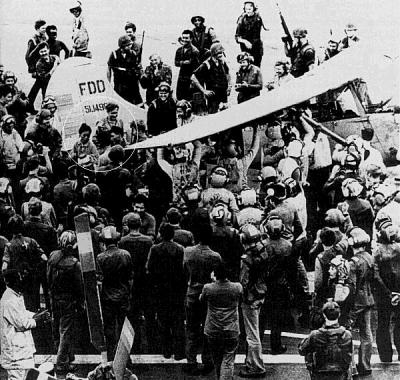 One of the more notable events occurred on the USS Midway when the pilot of a VNAF Cessna O-1 dropped a note on the deck of the carrier, the note read “Can you move these helicopter to the other side, I can land on your runway, I can fly 1 hour more, we have enough time to move. Please rescue me. Major Buang, Wife and 5 child.” Midway’s CO, Captain L.C. Chambers ordered the flight deck crew to clear the landing area; in the process an estimated US$10 million worth of UH-1 Huey helicopters were pushed overboard into the South China Sea.

Once the deck was clear Major Buang approached the deck, bounced once and then touched down and taxied to a halt with room to spare. Major Buang became the first VNAF fixed-wing pilot to ever land on a carrier. A second Cessna O-1 was also recovered by the USS Midway that afternoon 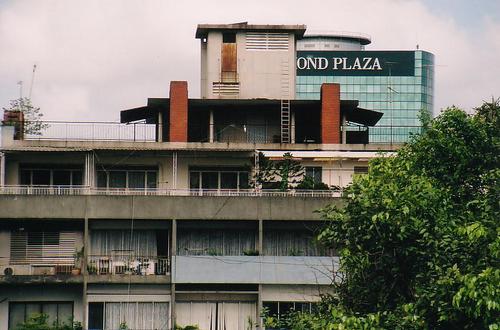 The rooftop of 22 Gia Long Street, Saigon. The scene of Hubert van Es’ famous photo from the Fall of Saigon of an Air America Bell 205 (N47004) evacuating Vietnamese on 29 April 1975. The photo location is often incorrectly stated to be the roof of the US Embassy, Saigon. 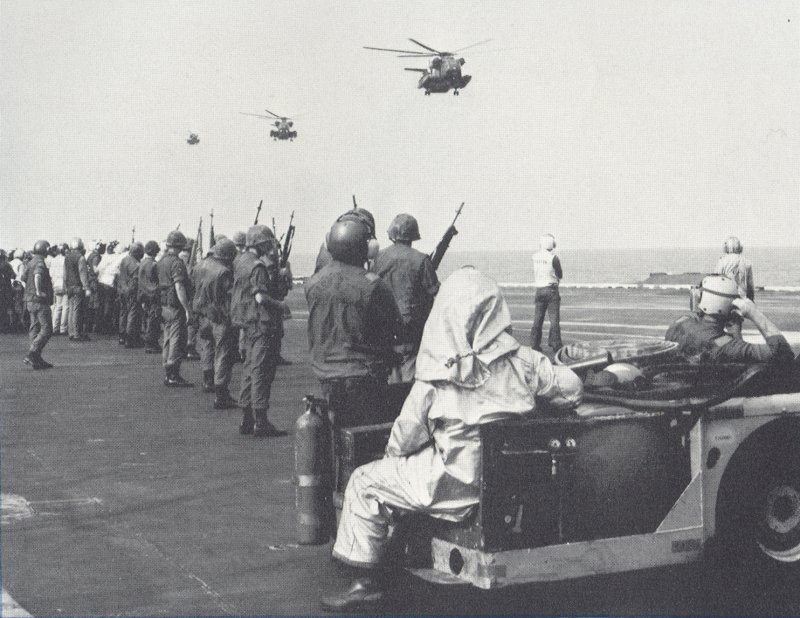 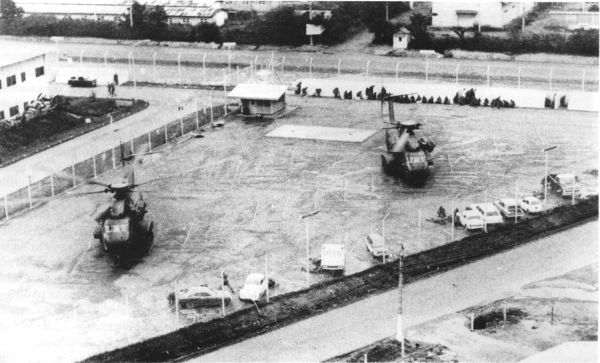 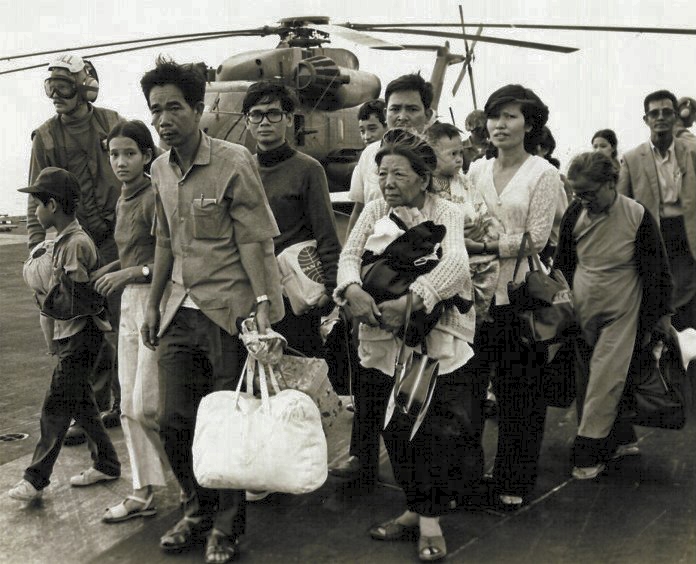 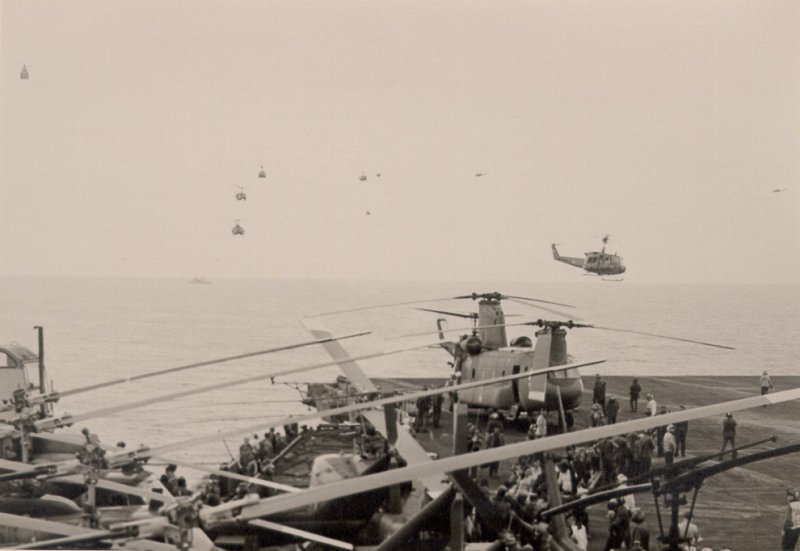 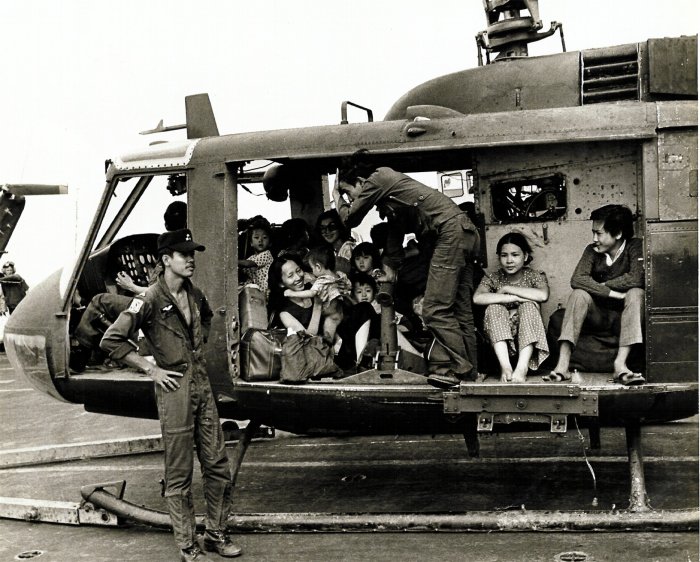 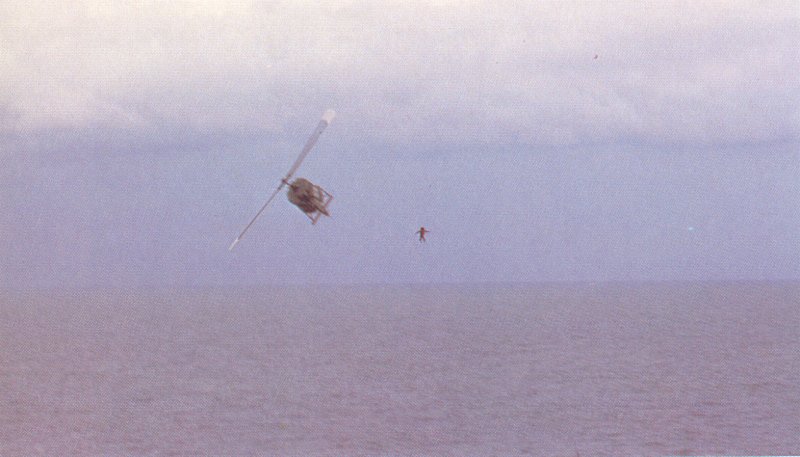