While it might be disappointing to find out that there was no single individual who became a football star at Alabama, received the Medal of Honor in Vietnam, played ping-pong in China, and then go on to become a famous shrimping boat captain, there is a man who bears the title of, “The Real Forrest Gump.”  And at least for the sake of some congruency, Sammy L. Davis was in fact a recipient of the Medal of Honor for his actions in Vietnam.  You don’t know it yet, but you have seen Sammy L. Davis receive his Medal of Honor more times than you can probably count.  While Forrest deserves the glory for saving Lt. Dan, the Real Forrest Gump deserves the credit for making it all possible.

As if sharing a name with the famous Sammy Davis Jr. of the Rat Pack were not enough cause for notoriety, Sammy L. Davis would be thrust into the national spotlight thanks to the 1994 classic film Forrest Gump.  The movie had a remarkable ability to inject Tom Hanks into real historical footage in a manner not often seen in films to date.  And when it came time to award Forrest the Medal of Honor, they took the footage straight from the ceremony that honored Sammy L. Davis.

In fact, it was actually Davis’ body with the head of Forrest superimposed on it that you see.   Granted, Davis never actually dropped his pants to show the President his rear side bullet wound, but for much of the footage, you get to see some real history in action.  Then again, if you really want to see history in action let’s talk about the fascinating actions which led Davis to receive the real Medal of Honor and lead to his place in movie lore as “The Real Forrest Gump.”

Upon enlisting in the Army, a young Davis volunteered for the artillery because his father was an artilleryman in World War 2.  While artillery will often find themselves behind the front lines due to the range of their weapons, the use of fire-support bases throughout Vietnam would put them dangerously exposed to a direct assault.  Knowing the risk, Davis requested himself to be sent to Vietnam after completing training.  On November 18th, 1967, a young PFC Davis and his unit were helicoptered in to a fire-support base west of Cai Lay.  Less than 24 hours later, Davis would find himself in the fight for his life and those around him.

Mortars began to rain down on the American position in a relentless assault while an estimated 1,500 Viet Cong soldiers emerged from jungle in an attempt to overrun the base.  With the enemy surprising the Americans in close proximity, Davis jumped on a machine gun to provide covering fire while his crew operated the 105 mm howitzer.  During the assault, Davis’ howitzer team would take a direct hit from a recoilless rifle that sent Davis flying into a fox hole and his crew off the weapon. 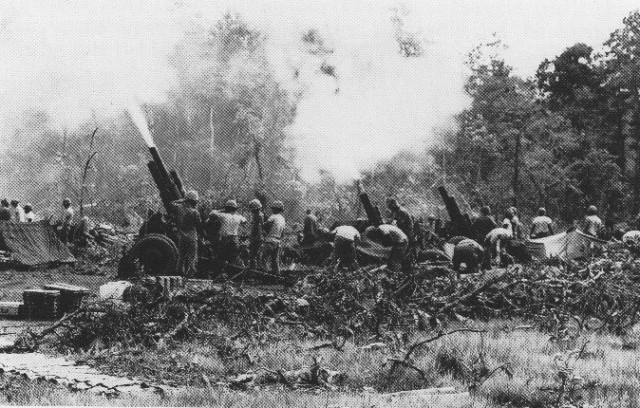 Despite the burning gun and disregarding his own injuries, Davis jumped back on the howitzer to fire as many rounds as possible on the approaching enemy.  The Viet Cong were advancing 5 deep in front of him when Davis loaded a Beehive round which utilizes 18,000 beehive darts in each shell and fired it point blank at the enemy.  When another mortar shell knocked Davis off the gun again, he returned to his feet and continued to fire from the damaged howitzer until there were no more round left.  However, Davis wasn’t done disregarding his own safety just because he was out of ammo.

Assisting the Americans in their defense of this position was the fact that a river ran between them and the main assault from the Viet Cong.  When Davis was done firing his howitzer, he heard the screams of wounded Americans from across the river.  Despite not being able to swim himself and being wounded, he grabbed an air mattress from the camp and paddled across the river to retrieve his wounded comrades.

Followed by other soldiers, they found 3 American servicemen on the other side of the river. Davis fired into the jungle to slow the enemy advance while the most seriously wounded man was carried across the river.  He then protected the other two with small arms fire until he could get them back across.

Once back and still in disregard for any personal injuries, Davis joined another howitzer crew and continued the gallant defense of the fire-support base.  Sometime before dawn, Davis received severe injuries to his back and, yes in true Gump fashion, even his buttocks.  While in the hospital, he petitioned General Westmoreland to be allowed to stay with his unit rather than be sent home.  His request was granted, but due to his injuries limiting his ability to execute his normal duties as an artilleryman, he was made a cook.

Sammy L. Davis was awarded the Medal of Honor by President Johnson a year later in what seemed like a routine ceremony.  But thanks to remarkable digital effects and the wanderings of one Forrest Gump, the world has been able to see a young Davis receive his Medal time and time again.  And while the fact that they were both mutually wounded in the buttocks makes for a hilarious point of historical accuracy, the Real Forrest Gump kept his pants up.

Fiction often finds its inspiration from real life and though we enjoy the virtue of a good piece cinema, let us not forget about the virtue and gallantry of men like Samuel L. Davis who make such stories possible.