On 19 February 1943, German Field Marshal Erwin Rommel launched an attack on allied troops at the Kasserine Pass. This gap in the Atlas Mountains of western Tunisia had the potential to provide a way through the Allied lines, giving the Germans an advantage in the war for North Africa.

Driving the allies from Africa would allow the Germans to reach the oilfields of the Middle East, ensuring fuel supplies and allow attacks on the Soviets from the south. But it was proving a difficult conflict. The Battle of Kasserine Pass would be no exception. It would be the first major battle of World War Two between American and German troops, and one that would shape the course of the war in the coming years.

When America entered the Second World War in 1941, its government agreed with the British that they should deal with Hitler before turning their focus to Japan. American schemes for an invasion of France were set aside by the battered British in favour of intervening in North Africa, where they had already had some success. And so, in 1942, American forces joined the British in Operation Torch, landing thousands of troops on the Mediterranean’s southern shore, where they would engage in a protracted campaign to capture Tunisia.

From the start, there were problems with the African campaign. Inexperienced and poorly organised American troops annoyed the experienced British soldiers while the British in turn annoyed the Americans with their arrogance. Facing Field Marshal Rommel, one of the most effective leaders in the Nazi war machine, the Americans faced a dangerous foe. They were  joining a war that had raged back and forth across the desert, with neither side able to secure a final victory.

Through January and February 1943, Rommel gained ground, defeating the Allies at Faïd Pass and Sidi Bou Zid, and forcing them to retreat from Gafsa.

3. A Bold Yet Reluctant Leader

Rommel was a bold, decisive commander who understood the conflict well. He hoped that, by pushing through the Kasserine Pass, he could break through US lines and capture their supplies lines around Tébessa.

But he lacked the full backing of Colonel-General Jürgen von Arnim. To Rommel’s great disappointment, Arnim held back some of the forces he needed for the attack, ordering that they instead attack other passes. Rommel was reluctant to proceed in a way that left his flanks exposed, but would not give up the opportunity that Kasserine presented. 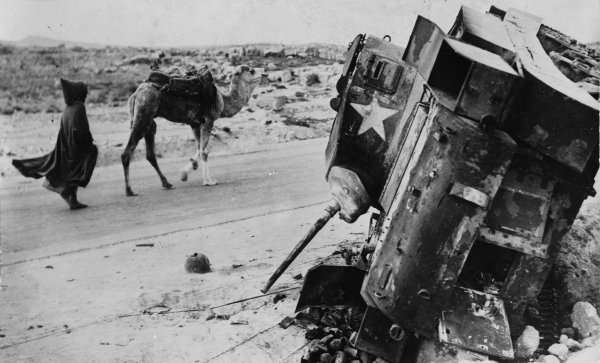 Rommel launched his attack in a rain storm in the early hours of 19 February, with the Afrika Corps Assault Group leading the way. Facing them was Stark Force, a combination of American and French troops arranged in carefully planned defensive positions by Colonel Alexander Stark.

The German 33rd Reconnaissance Unit failed in an initial attempt to surprise the defenders. Launching tank assaults down the floor of the pass and along the hills to its east, Rommel found his troops stalled by stiff resistance and persistent artillery fire.

The following morning, Rommel committed further troops to the attack. Mostly Germans of the 10th Panzer unit, they were accompanied by the Italian 131st Armoured Division Centauro. Meanwhile, British troops were being assembled down the road at Thala, and a small detachment was sent to support Stark Force.

At last, Rommel achieved his breakthrough. The American defenders fell back from the pass in a disorganised retreat. But they had bought enough time for regroup at the  allies next line of defence.

5. The Road to Thala

The town of Thala was vital to the Allied armies. If it was captured by the Germans then communication routes would be severed and US troops, including the 9th Infantry Division, would be completely cut off.

While Force Stark fought in and around the Kasserine Pass, the British 26th Armoured Brigade had been preparing to defend Thala. Along with remnants of the American 26th Infantry, they dug in on ridges either side of the road to the town. Forcing the Germans to take them on one ridge at a time, they fought a costly but vital delaying action. By the time night fell, the Germans were still south of Thala. It had held.

Overnight, the Allies again reorganised. The front was now held mostly by British troops, with powerful British and American artillery support. On the morning of 22 February, these guns opened up with a heavy barrage against the Germans. Armour was destroyed, communications disrupted, and the whole advance stalled for a day. The Germans tried to regroup, but the artillery never let up, and as night fell, the 10th Panzer retreated from the field.

Rommel could see that the attack had not achieved its objective. He was over-extended, supplies were running out, and his best chance for a breakthrough had been stopped by the Allied artillery outside Thala. On 23 February he met with his officers and, in the face of opposition from those who thought that victory was still possible, ordered a retreat.

US air strikes followed the Axis troops as they withdrew down the pass. By 24 February, the vital valley was back in Allied hands.

7. After the Battle of Kasserine Pass

The Battle of Kasserine Pass had achieved its tactical aim of breaking through the pass, but been thwarted in its strategic objective. There was no breakthrough in the Allied line, and supplies had not been seized. Though the Germans had fought well, it had not been enough. They had not been able to exploit the relative inexperience of the American troops facing them. Rommel would make one more advance in March, before being removed from Africa by an unhappy Hitler, his command given to von Arnim, the very man who had undermined his plans.

On the Allied side, Kasserine Pass provided vital lessons. The inexperience of American officers had led to problems with troop deployments and communication problems, while the inexperience of their men had got many killed. But they had, at last, had a chance to prove that they could fight.

The British role at Kasserine Pass would only reinforce their sense of superiority. But that would change as the fighting went on, and the Americans proved, through the sort of determination shown at Kasserine, that they would not be easily beaten.

The battle of Kasserine Pass taught the American many lessons and they learned them well. The lessons learned allowed them to defeat the Germans many times in the remaining years of the war.