Prior to the First World War, Japan designed two dreadnought-style battleships. They were developed at a time when international players were engaged in a naval arms race, one Japan didn’t want to be left out of. The country was particularly concerned with defending its waters against the US Navy. Thus, Fusō and Yamashiro were born.

The lead ship, Fusō was launched in 1914 and commissioned throughout the First and Second World Wars, although she only saw service in the latter conflict. A mere 30 years after her launch, she was sunk during combat in the Philippines, leading to the deaths of the majority of her 1,600-man crew.

Creation of the Fusō-class of battleships

The Japanese engineers who created the Fusō-class of battleships wanted to do more than just make a strong ship resembling the HMS Dreadnought (1906). They wanted the heavy protection of these ships, along with the speed afforded by battle cruisers. They were ultimately successful, creating two ships ranked among the most powerful in the world.

The Fusō-class of battleships were much larger than their international counterparts, at 202.7 meters in length and with an elongated hull. This was part of what allowed them to reach an impressive top speed of 28 MPH – closer to 26 MPH, in Yamashiro‘s case. In comparison, the HMS Dreadnought only reached a top speed of 24.9 MPH during her sea trials.

Fusō‘s initial armor was 229 mm to 305 mm thick at the waterline, and roughly 102 mm below that. For the deck, the armor was substantially thinner, at between 32 mm and 51 mm thick. As with the guns, the armor was also overhauled when the battleship was reconstructed. Most noticeably, the deck area was improved to have an armor thickness of 114 mm.

Although Fusō was launched during the First World War, she never actually saw any combat during the conflict. She was commissioned in 1915 and put under the command of Capt. Kōzō Satō as part of the 1st Division, where she was put into service patrolling the Chinese coast. She also served as the division’s flag ship toward the end of the war.

In September 1923, the Great Kantō earthquake rocked Japan, wreaking havoc on the cities of Tokyo and Yokohama. Despite lasting only 14 seconds, it was enough to bring down many large buildings and start widespread fires. It also sent out a destructive tidal wave from the fault line where the quake originated.

In the wake of the disaster, Fusō spent two weeks helping survivors.

Deployment during the Second World War

It was during the Second World War that Fusō saw most of her service. The ship was assigned to the 2nd Division of the 1st Fleet on April 10, 1941. Throughout the war, she partook in many notable operations, including serving as distant support for the 1st Air Fleet’s attack on Pearl Harbor.

With the 2nd Division, she was also used to catch the carrier fleet the Americans launched from during the Doolittle Raid in April 1942. However, her crew was unsuccessful. While they were also involved in the Battle of Midway, the 2nd Division was tasked only with providing aid to the Aleutian Support Group.

Neither Fusō nor her sister ship, Yamashiro, had eventful careers during the war, primarily because they were too old and too slow to be placed into the middle of most naval battles. There were plans to convert Fusō into an aircraft carrier. However, the idea was scrapped after the Japanese experienced a high number of pilot losses in mid-1944.

Fusō was sunk in the Surigao Strait

Fusō remained relatively safe throughout the war – that is, until she was sent into combat in the Philippines. By October 1944, the battleship was under the command of Rear Adm. Masami Ban, who would lead her into Operation Shō-Gō, the Japanese attempt to destroy the American fleet that had landed soldiers on the island of Leyte. 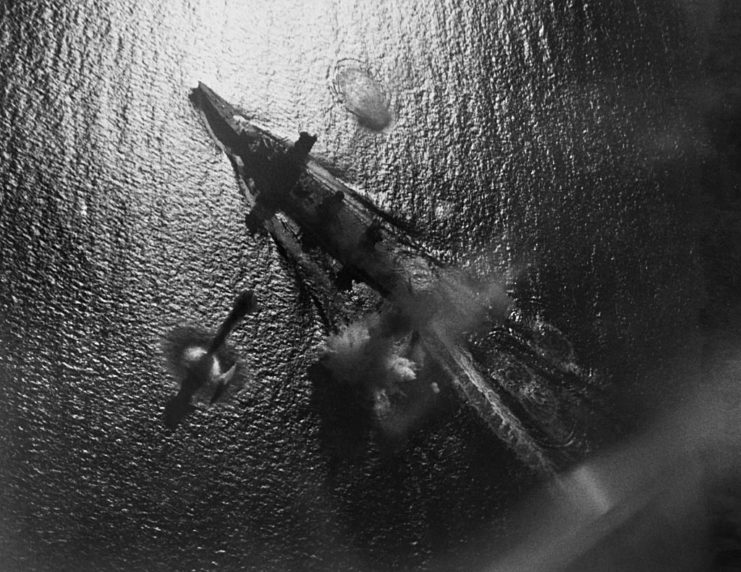 While traveling through the Sulu Sea to meet up with the rest of the Japanese forces in the Leyte Gulf, Fusō was met by an American force consisting of aircraft carriers and aircraft. Accounts of her sinking are murky, with some claiming the ship exploded into two halves. What likely happened, however, was that fires started by burning fuel simply looked like an explosion.

Hideo Ogawa, who survived the sinking, stated that, after Fusō was hit by an unknown number of torpedoes, she began to slowly sink. Ogawa was one of only 10 men who made it back to Japan, out of the ship’s over-1,600 crew members. Some of the others may have been saved by another Japanese ship, only for it to be sunk later in the battle.

Fusō remains where she sunk in the Surigao Strait, 185 meters below the water. The wreck was discovered in 2017 by the RV Petrel, a research vessel given permission by the Philippines National Museum to survey the battlefield, in recognition of the anniversary of the Battle of Surigao Strait.

Petrel‘s crew identified that Fusō had sunk upside down, but remains in one piece, bar the hull and pagoda mast.

More from us: The Titanic’s Sister Ship Took Out a German U-boat in World War I

Along with Fusō, the researchers identified the remains of Yamashiro, as well as the Japanese destroyers Yamagumo (1937), Asagumo (1937) and Michishio, all of which were sunk during the battle.