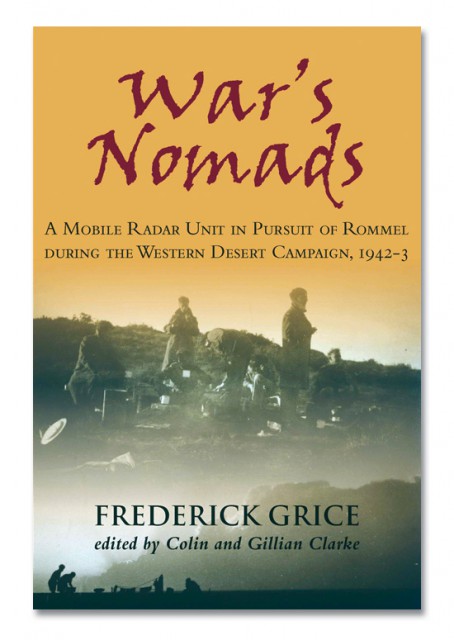 We’ve been in the desert a few times and I generally find writing of the campaign to have a different quality to conflict in other climes. It really is the case that the desert often feels like the sea. Like great oceans it makes the affairs of men seem miniscule.

Someone who recognised this was Frederick Grice, a schoolmaster relatively advanced in years, called up to do his bit for King and Country.  It was typical of an uncaring and unthinking system that a teacher of quality and sensitivity would find himself the lowest of the low as an RAF erk. They probably didn’t know what to do with him.

Instead of using his talents the system put him in a mobile radar unit leapfrogging like brigands across the desert blue. Our hero begins his tale with the Jurassic paced journey out on a vile ship meandering to Egypt via Cape Town. He resents the meanness of officers enjoying relative splendour while the ORs languish in squalid conditions below. Like so much else in Britain there were two RAFs, one of dashing boys in blue glory and another where class-consciousness was stifling. Mr Grice wasn’t so much jealous as furious at the lie of everyone being in it together. They patently were not.

His writing comes alive in the desert where he found contentment in the nomadic life of the title. The prose brings to mind the desert classics of Alan Moorehead I reviewed some years ago. Mr Grice paints endearing pictures and builds images of a very real war fought and won by an everyman. He made the most of the experience and while it didn’t make him it certainly enhanced him. I find his writing poetic and enthralling. It comes as no surprise he became a popular author after the war.

Like other books this is one of the footnotes we get now the big stuff is done. But the value offered here is profound. This is real war. The eloquence and beauty of the prose is disarming but the effect is like a late evening cup of tea. Other beverages are available. This one won’t take you long to read but you will find something different from the usual desert sagas. The shipboard stuff just made me angry but tales out of the blue made me proud. Thankfully someone realised before it was too late what Frederick Grice should have been employed to do and he became an educator in the RAF. Lovely stuff.