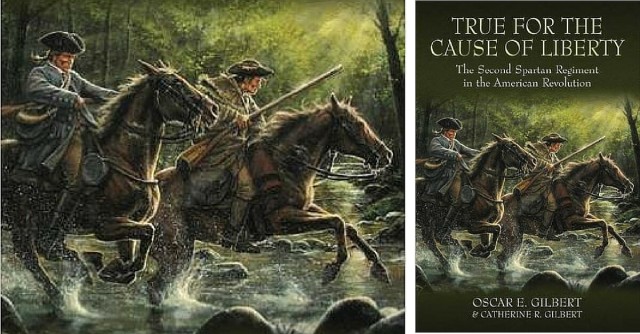 This review will be shorter than most—not because the book is poor; on the contrary, the book is very good—but it is the type of book that contains so many similar anecdotal accounts, that a clear view of it emerges fairly easily.

The view we get from Oscar and Catherine Gilbert’s True for the Cause of Liberty: the Second Spartan Regiment in the American Revolution is of a vicious back-country civil war fought throughout the American South. This approach is commendable because it helps dismantle the American myth that the Revolutionary War was a tidy conflict pitting Patriot citizen-soldiers on one side and British regulars on the other. No, the view we get from the Gilbert’s book is of a civil war—a civil war pitting neighbor against neighbor, a civil war that is messy, complete with massacres, looting, and other forms of human cruelty.

The Gilberts make it perfectly clear that True for the Cause of Liberty “does not pretend to be a complete history of the Revolutionary War, or even the war in the south.” Instead it traces the activities of the Second Spartan Regiment of South Carolina, a militia unit involved in key campaigns throughout the South. Commanded by Colonel Thomas Brandon, the Patriot militia engaged the Creek and Cherokee, British regulars, and Loyalists militias and participated in fighting at the Sieges of Savannah and Charleston, King’s Mountain, and Cowpens, just to name a few of their more well-known engagements.

The Gilberts provide an excellent context early on by analyzing the culture of “a people bred to war,” the back-country Scots-Irish. Their Presbyterianism and political radicalism set them apart from the ‘civilized’ society of the tidewater regions. Decades of skirmishes with the Cherokee helped harden the Scots-Irish settlers, equipping them to take on not only Loyalist groups, but the might of the British Army.

Reading the book I couldn’t help but be reminded of the scene in the 2000 film The Patriot where Benjamin Martin’s (played by Mel Gibson) home is burned down and his youngest son is murdered by the fictional British dragoon Colonel William Tavington (whose character, incidentally, was inspired by the notorious Lt. Colonel Banastre Tarleton). The book contains anecdote after anecdote in which civilians are caught up in a bitter civil war. Over and over we see a familiar narrative involving the burning of homes, murder, rape, looting, and torture. As one Tory woman put it: “We are going to hang all the dammed Rebels, and take their wives, scrape their tongues, and let them go.” The Gilberts then proceed to explain the process of “tongue scraping.” These type of inhumanities took place on both sides: among both Loyalists and Patriots. Such was the nature of a back-country civil war.

In some ways the book almost reads like a local history. The Gilberts are precise in relating even the smallest of skirmishes in various locations throughout the South. So detailed is their tracing of the Second Spartan Regiment that I was able to learn about some small-scale engagements that took place near my childhood town of Lake Norman, North Carolina that I had known nothing about. Don’t expect in-depth analysis or new historical interpretations. The book is more or less the recounting of facts.

While the book is well-written, the writing is not necessarily entertaining. At 328 pages, this is a serious book for those with a serious interest in the southern campaigns of the Revolutionary War. It is not light reading. It is meticulously researched, drawn heavily from interviews, letters, diary entries, and memoirs. For serious scholars of the Revolutionary War, the research alone is exciting. True for the Cause of Liberty is a valuable contribution. It is a solid volume, and is recommended for those interested in the Southern Theater of the Revolutionary War. Many thanks to the Gilberts for shedding new light on the role of the Second Spartan Regiment. 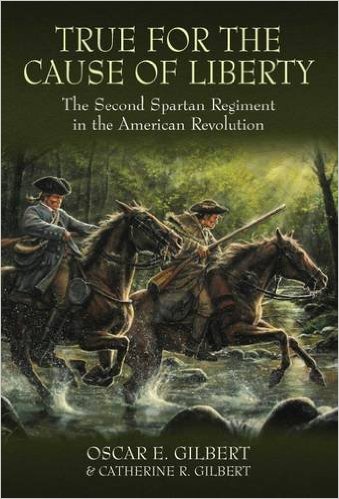 TRUE FOR THE CAUSE OF LIBERTY: THE SECOND SPARTAN REGIMENT IN THE AMERICAN REVOLUTION
By Oscar E. and Catherine Gilbert
Casemate Publishers
ISBN : 9781612003276