I will put it straight out there and say I don’t hold with any notions of guilt or contrition for the British bombing offensive against Germany and occupied Europe during World War II.  I well remember a drama about Bomber Harris where one of the people questioning the campaign he inherited turned the Ethics of bombing into the Bombing of ethics. I can see the arguments, but the hand wringing done by the British establishment from Churchill downwards in 1945 was insulting to the bomber crews who survived and treachery to the fifty-five thousand who died. That is my view. No decent leadership would send people out to do their bidding and then wash their hands of them when they come home. But it happened.

I’ve just written another review that touches on heroes and it happens that the bomber men have always been as such to me. I well remember an encounter in a supermarket checkout queue with a frail old man and his wife and as we got talking he told me he had been an air gunner. I shook that man’s hand and said thank you. I suspect he will have passed on by now. My uncle Harry was a proper cockney cheeky-chappie who loved his family, football and ducking and diving. He was an intensely loyal man but I didn’t see much of him in my adult years and I wish I had talked to him about his time on the bombers, but it never happened.  Harry had been badly injured in a flying accident that affected him all his life, but his cheerful exterior never faded.

Norman Franks is well known in the premier league of aviation history writers and to say he is prolific would be an understatement. This book came to WHO a while back and was in my pile of ‘don’t leave it too late’ books I have been meaning to get round to but never quite manage it. Ton-Up Lancs is not new book and this edition, ten years younger than it’s predecessor; is, itself, derived from an earlier title.

Thirty-five Avro Lancasters survived to complete a hundred or more operational sorties. Over seven thousand were built and more than three thousand were lost on combat operations. A further two hundred were lost in accidents. Perhaps my uncle Harry was in one of those.  We only have to consider how much interest was generated when the Canadian Lanc came over to the UK to fly with the Battle of Britain Memorial Flight’s aircraft. Vera and Thumper were a magnificent sight and, thankfully, I managed to see them when they flew off from my local airport. I had been to an air show where their appearance was cancelled and had to work on other occasions when I might have seen them. To say I was gutted would be putting it mildly. Everyone loves a Spitfire but you really have to see a Lancaster in flight. Happily the BBMF’s Lanc survived an engine fire and will be back in the air for us to admire in due course. Lancasters are now rare sights but if you are in London get yourself to the RAF Museum to marvel at their example, a plane that tops the tree completing one-hundred and forty combat sorties.

It is a probably obvious fact that the thirty-five aircraft featured here had charmed lives and didn’t keep the same crews or even stay with one squadron. There were name changes and modifications and the men who flew them came and went. Surviving aircraft are all more akin to Trigger’s Broom than wholly original. The important thing is how Mr Franks uses the planes to talk about the men who flew them. They matter most. I come back to my friend in the supermarket. Just as in every facet of the armed forces, not all the men were heroic or angelic and they all had their reasons for being there. But the bomber men mean a great deal to me and, again, if you are in London, visit their memorial at Green Park and say your thanks.

Not all the Lancs featured here had nose art or interesting names but I am drawn to Uncle Joe for it’s echoes of Len Deighton’s Bomber, a bitter sweet fictional account of the bomber war written over forty years ago.  There was no sentimentality at the end of the war and whether a plane had flown a hundred sorties or not it was just as likely to end up as razor blades as all the others. This wasn’t exclusive to the UK, only recently I was doing some work on Hell’s Angels the first B-17 to surpass twenty-five missions which returned home to the United States where it was feted for a while and eventually scrapped.

This is a top class book packed with faces and information and it should act as a bit of a lightning conductor to get new readers interested in the exploits and valour of Bomber Command between 1939 and 1945. The archive photography is well up to standard and it is worth remembering that not every aircraft in service was photographed to any extent and finding images of so many is fantastic for us, the reader. Happily I have a belated link to the book – the image of ED860 with ED588 comes from the collection where I do my day job and I recently had the negative in my hands. I love this sort of connection.

Mr Franks has built up a huge volume of research material to produce books like this with confidence and Grub Street retains their reputation for sympathetic aviation histories.  Revised editions of popular books are always worth a look. I did not have the first edition, so will cherish this one.  It may, on the face of it, be about just thirty-five aircraft, but in reality it represents so much more. 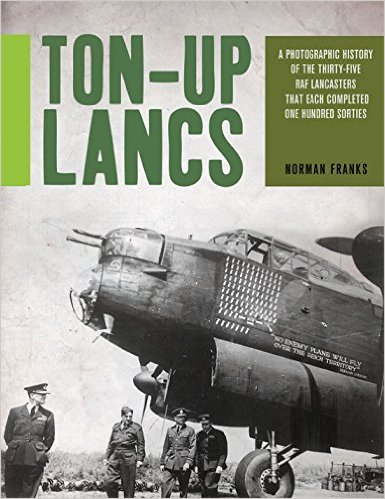 TON-UP LANCS
A Photographic Record of the Thirty-Five RAF Lancasters That Each Completed One Hundred Sorties
By Norman Franks
Grub Street
ISBN: 978 1 90980 826 3