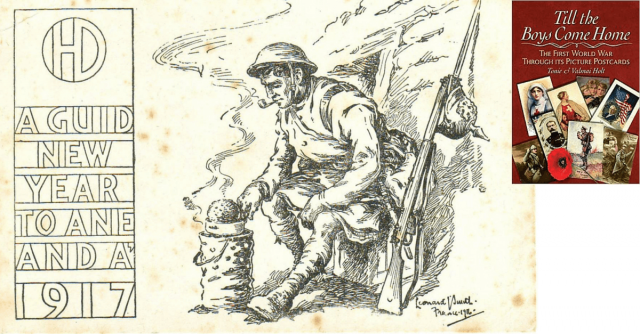 I like postcards but have resolved not to collect them because the thing would become a monster in no time. My ex-wife was convinced I am an inveterate hoarder and I suppose I have shown signs of it from time to time, but I am capable of culling things I once deemed ‘useful’ and do enjoy a good clear out.

There is something cathartic about it I get a real buzz from. This hasn’t stopped me building a library of books and collections of other treasures – old cameras, model cars and a pile of steel helmets amongst them.

Postcards from World War One can often be found at all kinds of antique markets and fairs all over the UK and on the Continent. I was in Lille once and had to stop myself paying a pittance for a set of cards showing the great cemetery and memorial at Notre Dame de Lorette just after it was completed. It is place I love visiting and I admit to having a deep interest in images showing the old battlefields as they looked just under a century ago and in the period up to when the madness was repeated. The summit of this would be the Michelin guides produced for the pilgrims of the 1920s. I don’t have any of them.

Post cards from the war itself can be superb things to look at. I only have one to hand and it shows Francis Dodd’s portrait of General Henry Horne, one of the least known commanders on the Western Front. It is from a series called Generals of the British Army – but I see from this book that Dodd’s work extended to admirals and the cards were reproduced in the Netherlands.

Just a while ago I did a long job making digital versions of a huge set of cards someone had deposited at a heritage centre on Canvey Island. These showed a range of British soldiers and sailors in the period just after the war and came from all over the British Isles.  I like the idea people could get photographs of themselves made as postcards to send to family and friends. There are pages on Facebook devoted to a number of corps and regiments of the period and these things do something to keep the men and women shown alive for us although most of the images will forever be anonymous.

Postcards, like cartoons, reflect the national mood and set out the stalls of the publishers of the age. They can be immensely attractive as pieces of art and many tell a story that helps underline the bigger picture and I am sure this is what attracted them to the Holts. They can become a story in themselves and in bringing them together this book gives us a window on the Great War that really brings the ebb and flow of it home.  There is humour, tragedy, unabashed propaganda, sentimentalism and hard-nosed reality on show in this compendium. What I like is the way the book shows a truly international story, it isn’t anchored in Britain by any means and this helps illustrate the role of postcards in the days before the talkies, television and the accessible media we take for granted today. All the war is here.

One thing has astonished me and it is card no 484 (of 715!) in the line-up. It shows British troops manning a barricade in Dublin during the Easter Rising in 1916.  I have held the original negative of this image in my hands because it comes from the archive of the Daily Sketch, and this negative is the sole survivor of the images the paper’s photographers took during the uprising. I had no idea the Sketch had produced postcards and it is something I will be raising with my archivist colleagues. There are hundreds more images in this book, but having a connection to one of them has had a genuine impact on me. It won’t make me rush out to collect cards, but I will be keeping my eyes open. Ephemera of wars can be fascinating stuff but you could allow it to consume you, hence my opening remarks.

This wonderful book first appeared in 1977, the year I acquired a service number, became acquainted with the self-loading rifle and the misery of the KF shirt. I guess you had to be there.   I can attest it feels like an age for Tonie & Valmai Holt to update the book, but there will have been good reasons for it.  Their battlefield guides and other works have taken on a kind of world domination and all that takes time to sort out. They tell us on the jacket that updating the book allowed them to acquire even more cards and replace a few that had gone walkies. I am not in a position to reflect on whether this new edition is definitive, but I assume it runs close to it.

Aside from all this it is a real pleasure to look at. If you have a love of images, be they via the brush, pen or developing tray, this book will really appeal to you. If you are looking for a different perspective of the Great War then look no further.

It was always obvious the centenary of the war would see a blizzard of the weird and wonderful appearing in book form. Clearly this reissue falls into the latter group. If it encourages you to collect then it has done something else besides. But maybe like me you will just look in admiration from afar and stick to the discipline (such as it is) of not filling your house up with more stuff. The book takes up a lot less space and kind of does the collecting for us. It’s a win-win situation if you think about it. 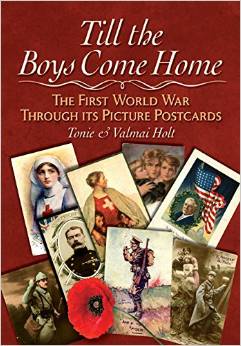