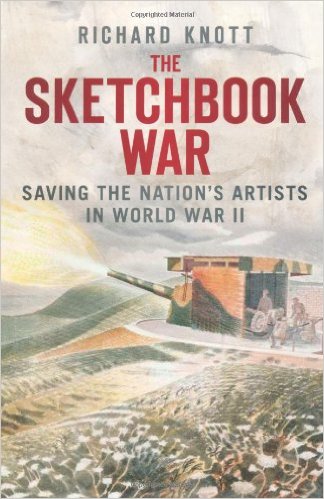 On 9th of July 1944 HW ‘Bill’ Warhurst of The Times was making his way through the ruins of Caen when he came across the curious sight of an artist painting the devastated landscape. He took a single plate negative of the man at work and got on with recording his own war. That man was Lieutenant Thomas Hennell ,RNVR, an Official War Artist who had arrived in Normandy after D-Day. Much to his irritation Tom Hennell, and indeed any other war artist for that matter; had not been allowed to go in with the assault on the 6th of June and he saw it as a great opportunity missed.

Bill’s picture of Tom is on page 181 of this extremely entertaining book by Richard Knott. He takes us through a World War II the war artists knew. We see how they lived and worked, how they coped and how some died. This is one of those footnotes of the war books we get nowadays because so much of the bigger stuff has been done to death. Writers look for angles and curios to attract us and my attitude to them is fill yer boots, because they spray a largely monotone war with colour. The otherwise clever chaps using software to convert that most black and white of wars into colour are fine in themselves, but their efforts are ersatz, whereas works like this offer a whole spectrum of possibilities.

Mr Knott’s principal characters are a mixed bunch of men who left often rarefied lives to create a collection of art that is as relevant today as when it was made. As always there were always doubters and jobsworths queuing up to interfere, but it seems the committee governing war art got things just about right. All the work done was owned by the state – for the people, to be seen in regional galleries, not just in London. A good deal of it ended up on the walls of officer’s messes and service chief’s offices but much more is still out there for us to see.

The author sets up his characters really well, making them immensely likable. Many had serious adventures and three of them were killed. Mr Knott reminds us that their deaths were a loss to us all. The calendar jumps about a bit and anoraks will not like the few but itchy factual errors about weapons and equipment. But it is essential to remember this isn’t a book about sprockets and widgets – it’s for the human stuff. Aided by the author’s smattering of artistic licence, the thing rattles along with gusto. If I’m honest the prose reminds me of one of those Paul Whitehouse monologues where the old bloke sits in a fine leather chair by a roaring fire telling stories of his life ending with “And, of course, I was very, very, very drunk!” The ebullient Ted Ardizzone would probably agree.

This book is a keeper for me. It fits in beautifully with Rick Stroud’s classic The Phantom Army of Alamein and I do like something different. The big picture is always important, but there will always be others and the work done by these artists is a case in point. Mr Knott gives the artists something of a mythical quality but they were very real, incredibly talented and totally committed to their craft. They were more than just a few good men.

Tom Hennell survived the European war and went out to the Far East in the mid-summer of 1945. He was there until the end and was still sketching on a dangerous November day in Java when Indonesian nationalism was exploding on the Dutch and their British friends. He was beaten by a mob and dragged away, never to be seen again. His name is on the Memorial to the Missing at Chatham.

By happy coincidence, an exhibition of the work of Eric Ravillious, who was a passenger in a Lockheed Hudson lost off Iceland in 1942, is on at the Dulwich Picture Gallery in London until the end of August. It will be too far away for many people reading this, but hopefully someone will see the beautiful art, made by a fascinating man, who gave his life for art and his country. If you do go, let me know what you thought of it.